Detentions of foreign-flagged vessels at UK ports by the MCA during July 2016 totalled three.

In addition, four vessels remained under detention from previous months. Vessels detained during the previous months include the 3,001gt/1994 built Malaviya Seven, the 968gt/1974 built Sea Trident, the 4,450gt/1999 built Southern Star and 106gt/1913 built Cien Porciento. Six out of seven vessels remained under detention at the end of July, with one vessel released on 11th July. The vessels which were detained during July were the 2,151gt/2004 built Malaviya Twenty (4th at Great Yarmouth), the 1596gt Paulin B (8th at Great Yarmouth) and the 334gt/1972 built RSS Cormorant (27th at Portland).

Three Milford Haven ship pilots were injured when their pilot cutter made ‘hard contact’ with the 168,189gt/2009 built LNG carrier Lijmiliya, a Q-Max LNG carrier on charter by Shell, during a routine transfer on the morning of 10th July. The pilot boat St. Davids suffered significant damage upon impact and three of the five crew members on board the pilot boat suffered injuries. 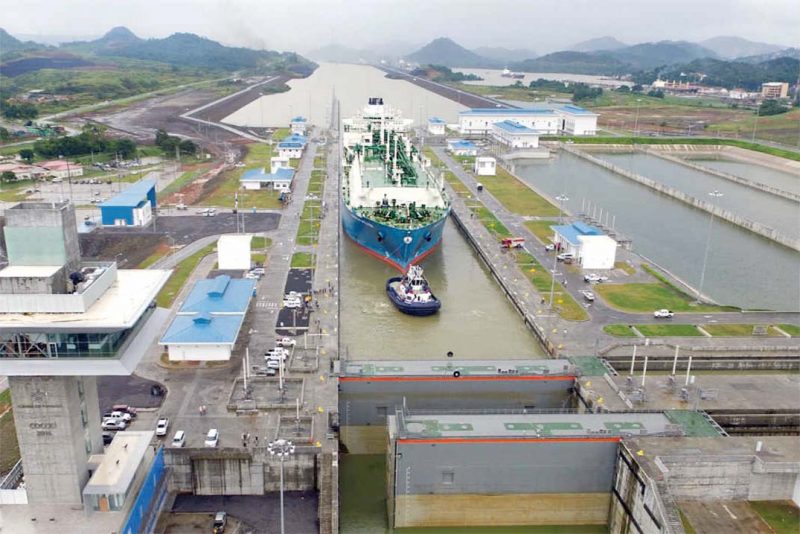 The Panama Canal is beginning to win back market share followig the opening of the new lock system at the end of June. Nearly 60% of all capacity on the USA-Asia trade now flows through the Panama Canal compared with around 40% at the beginning of the year. The Suez Canal had held the lion’s share of this trade since 2010. A further capacity shift can be expected once the 2M partners, Maersk and MSC, reconfigure their two Suez services (TP11/America and TP12/Empire) with the Shanghai and Ningbo calls transferred to Panama services and the South-east Asia calls placed into one consolidated Suez service. The first LNG carrier to use the new canal, the 105,773gt/2014 built Maran Gas Apollonia (above) transitted the Agua Clara lock system on 22nd July carrying a cargo of LNG from the U.S. Gulf Coast to Asia. The event marked the first natural gas cargo ever through the Panama Canal. 55 ships passed through the new locks in the first month of operation.

Reederei Hermann Wulff (RHW), one of the sectors of the Wulff shipping family in Germany, was declared insolvent in August and the winding up procedure commenced. The loss of this company follows others in Germany including Reederei Buss and CF Ahrenkiel. RHW was founded by the late Hermann Wulff in 1960.

Royal Boskalis Westminster N.V. (Boskalis) has been awarded the Offshore Balance of Plant contract by Vattenfall for the construction of Aberdeen Offshore Wind Farm, also known as the European Offshore Wind Deployment Centre. The project will consist of eleven wind turbines with a capacity of 92.4 MW. The contract includes all offshore elements of the wind farm, with the exception of the wind turbine supply.

Teignmouth Harbour Commission has spent £250,000 hiring a specialist dredger as part of plans to attract bigger vessels into the port. The 62m suction dredger Modi R cleared and improved the main navigation channel into the port.

UECC launched the second of its two new pure car/truck carriers, TBN Auto Energy, at the Nantong Cosco KHI Ship Engineering (NACKS) shipyard in Nantong, China, on 30th June. The new PCTC is a dual-fuel liquefied natural gas (LNG) vessel, featuring the 1A Super Finnish/Swedish ice class. With a capacity of approximately 3,800 cars, including 6,000sqm of high and heavy cargo, the ship will be the largest dual-fuel LNG PCTC in the world with the ability of loading cargo on 10 decks with a maximum cargo weight of 160MT, according to UECC. The 181m long and 30m beam TBN Auto Energy then underwent sea and gas trials, during which the vessel fully tested her engines using LNG fuel. UECC, jointly owned by Nippon Yusen Kabushiki Kaisha (NYK) and Wallenius Lines, is expected to take delivery of the new ship on 28th November in Nantong. Her sistership is the 43,200gt Auto Eco and both were ordered in March 2014.