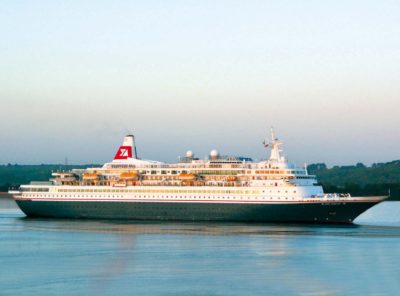 July did not start well for Fred. Olsen Cruise Line’s Black Watch when a fire broke out aboard on the 1st of the month whilst the 28,613gt/1972 built ship was bound for Madeira. The fire, which was quickly extinguished, started in the Auxiliary Engine Room, damaging three of the generators.

Some electrical power was restored to the ship, but some areas remained without power. The four main engines were undamaged by the fire, but further investigations needed to be undertaken, before an attempt was made to restart them. There were no injuries to the 696 guests or 365 crewmembers and Captain Henrik Mattsson kept guests fully informed at all times. The Black Watch had departed Dover on 25th June as part of a 13- night cruise to the Azores, Madeira, and Portugal. The ship was approximately 260 nautical miles from Madeira when the incident occurred and she arrived in Funchal at around 17.00 local time on Saturday 2nd July. The ship was expected to remain there until 7th July for repairs.

There had been some cabling damage on board, which affected lighting and communications, but all other services were working as normal. However, the cabling damage prevented the other two main engines from running, and it was anticipated that the repairs would cause disruption to guests during the work so guests were flown home to the UK from Funchal via three charter flights at Fred. Olsen Cruises’ expense. All guests will be compensated for loss of enjoyment and facilities.

The following 8-day Cruising the Fjordlands cruise from Tilbury on 8th July was cancelled. The ship later proceeded to the Spanish port of El Ferrol where she arrived on 9th July. The ship took on stores there and technicians flown into the Navantina shipyard at the port inspected the ship. Repairs were undertaken prior to the Black Watch heading directly to Tilbury to be prepared for her next cruise departure on 17th July.