General Dynamics NASSCO celebrated the christening and launch of the LNG-ready product tanker Constitution on 27th August in San Diego. The ship is the sixth in a series of eight eco-friendly tankers constructed or under construction for different customers at NASSCO’s San Diego-based shipyard. The 27,300gt Constitution is one of three tankers built for SEA-Vista, a partnership between SEACOR Holdings Inc. and Avista Capital Partners, and will be operated by Seabulk Tankers, Inc. The first ship in the series, the Independence, was delivered in April 2016. The new ship’s sponsor was Mrs. Cristin Thorogood, wife of Dan Thorogood, SEACOR Ocean Transport president.

INEOS Olefins & Polymers has exported the first ethane shipment from Enterprise’s Morgan’s Point, Texas terminal aboard the 22,887gt/2015 built multi-gas carrier JS INEOS Intrepid (above). The Morgan’s Point ethane export facility, which is the largest of its kind in the world, can load at a rate of 10,000 barrels per hour.

Navig8 Product Tankers took delivery of the 74,000 dwt LR1 tanker Navig8 Providence from South Korean shipbuilder SPP Shipbuilding in August. The 43,142gt Navig8 Providence is the second of four vessels contracted at SPP to be delivered to the company and is the second vessel to be delivered under the sale and leaseback agreements entered into with CMB Financial Leasing in March 2016. The ship has entered into Navig8 Group’s LR8 commercial pool. 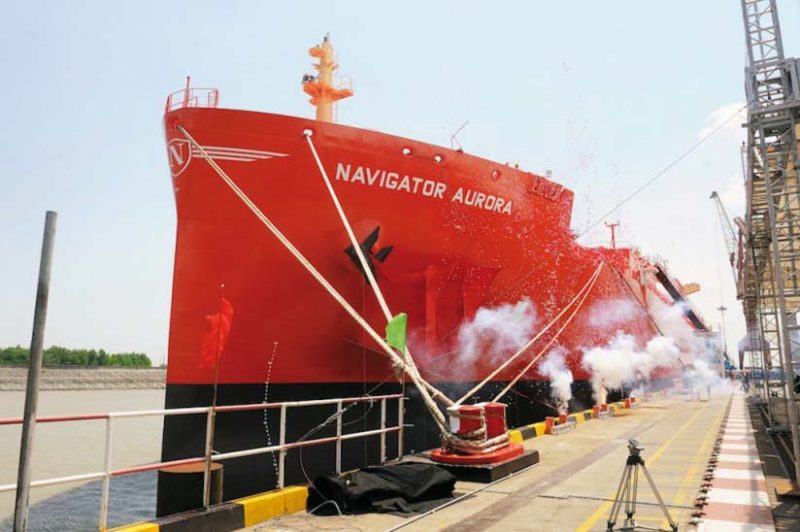 Navigator Gas’s new Navigator Aurora (above) is the world’s largest ethane/ethylene capable liquefied gas carrier and has been classed by classification society ABS. The 27,546gt ship has been delivered to Navigator Gas by Jiangnan Shipyard in Shanghai, China. The ship is the first of four ethane/ethylene midsize vessels to be delivered with ABS Class during 2016 and early 2017. She has a cargo carrying capacity in excess of 37,000cbm and is fitted with dual fuel engines that enable the ship to operate on either diesel fuel or LNG. Nordic American Tankers Limited (NAT) named two of its new Suezmax tankers, the Nordic Star and the Nordic Space, on 24th August. The 84,000gt Nordic Star was scheduled to begin operations in early September, while sister Nordic Space was still awaiting completion. The 162,000 dwt vessels, scheduled to join their owner in the third quarter of 2016 and the first quarter of 2017, respectively, are being built by South Korea’s Sungdong Shipbuilding and Marine Engineering. NAT ordered the 277m long vessels from Sungdong in December 2014 at $65 million each.

Teekay Corporation of Bermuda welcomed another Suezmax tanker, the 81,326gt/2011 built London Spirit, into its fleet on 9th August. Teekay assumed the technical management of the London Spirit at the Gibraltar Anchorage and she will be added to the Centaurus fleet. The 158,650dwt vessel is part of the acquisition of 12 Suezmax tankers from US-based Principal Maritime, announced in August 2016. The tankers were purchased for $662 million. As of 26th August Teekay Tankers owned a fleet of 45 vessels, including product tankers, Aframaxes, Suezmaxes and VLCC tankers. Including the 274m long London Spirit, the company’s Suezmax fleet currently consists of 22 vessels.