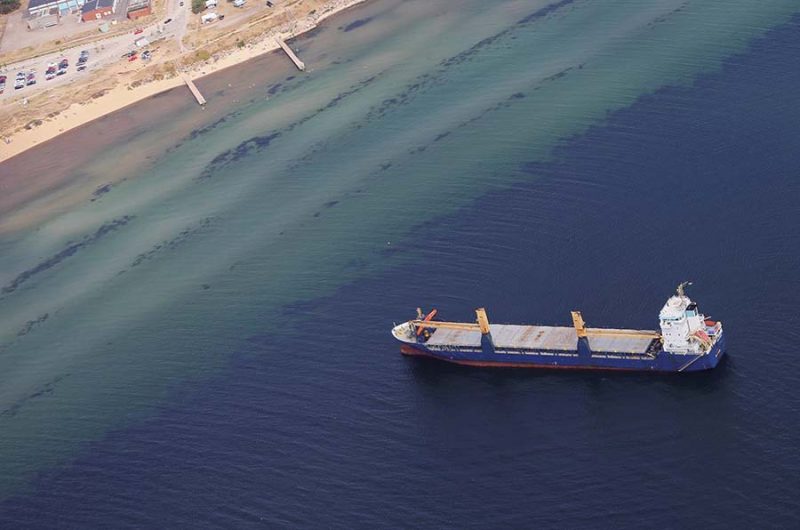 Just two days after the operation to salvage the 17,735gt/2001 built car carrier Makassar Highway from along the Swedish coastline had been completed, the 7,138gt/2012 built BBC Lagos went hard aground on a sandbank south of Helsingborg on 3rd August (above). Laden with 5,000 tonnes of wheat, the ship apparently began sailing in the wrong direction and eventually hit the sandbank. The Master was subsequently detained on suspicion of serious seagoing and gross negligence in maritime traffic. A salvage operation commenced to unload the wheat and move the ship to Helsingborg where the operation concluded. It is understood that there was no serious hull damage.

On 4th August the 39,906gt/2008 built and 52,000dwt containership ANL Wyong collided with the 4,761gt/2001 built and 5,312dwt LPG tanker King Arthur 4 miles south east of Gibraltar on 4th August. Both  vessels suffered damage but all crewmembers were unharmed and there was no pollution. The ships were underway to Antwerp and Rotterdam respectively.

The 159,383gt/2002 built VLCC Front Hakata, owned by Ship Finance International, lost power following an engine room fire on 5th August while anchored near the Chiba Prefecture, Japan, fully loaded whilst awaiting a berth to unload in Chiba. The fire was extinguished, there were no injuries to the 25 crewmembers on board, no reports of pollution and the ship was taken under tow.

On 7th August Maersk Line’s 20,842gt/1994 built and 1,827 TEU containership Cecilie Maersk collided with a fishing vessel while en-route to Le Port, Reunion, a small island near Madagascar. The 5 fishermen were rescued and no injuries were sustained. The fishing vessel, Le Puffin, was reported as having sustained hull damage. The ship was cleared to continue her voyage and a full investigation commenced. That same day two yachtsmen had to be rescued after their vessel collided with a cargo ship in the English Channel off Dungeness, Kent, at around 04.10. The two were rescued by Dungeness Lifeboat after their sailing catamaran had become entangled in the superstructure of the cargo vessel, the 1,978gt/2002 built Lady Nola. The ship had been on her way to Shoreham.

Three people were reported missing after an explosion ripped through the 161,202gt/2005 built crude oil tanker Desh Vaibhav, owned by the Shipping Corporation of India (SCI), on 14th August. The vessel reportedly suffered an explosion in one of her cargo tanks while underway off Oman. The cause of the explosion is yet to be determined and the ship had been underway from Sikka, India to Fujairah, UAE when the blast occurred. The fire was brought under control and firefighting vessels were summoned to cool the remaining tanks. 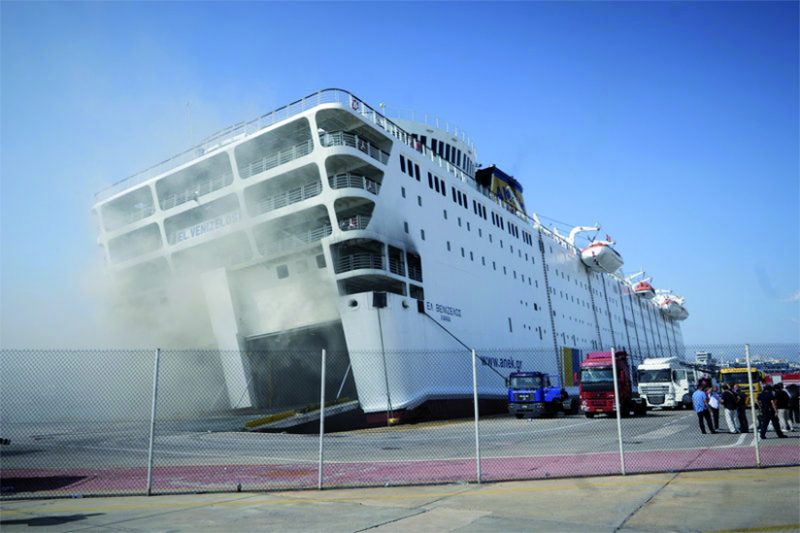 On 29th August, the 38,261gt ro-ro passenger ferry El. Venizelos caught fire off Piraeus (above). The El Venizelos was headed to Chania from Piraeus with various vehicles along with 875 passengers and 141 crew. Some 30 miles off Piraeus, a vehicle caught fire which spewed out dense black smoke. The ferry’s fire suppression system was able to contain the blaze quickly, but many compartments were filled with smoke. The El Venizelos returned to Piraeus where passengers were safely evacuated and fire fighters extinguished the fire.

Shipping accidents and incidents from around the world