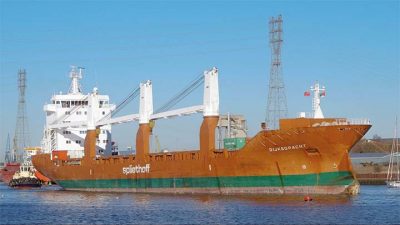 ABP Ipswich has broken records again as the port welcomed larger vessels and saw a surge in ship calls in 2016. In total, 743 ships called at the port, up 8% from 2015 figures. This increase aligns with an increase of gross tonnage, which rose by 13% to 2.6 million gross tonnes last year. Ipswich, which is the UK’s leading export port for agricultural products, has had over £5.4m invested into upgrading facilities and replacing equipment over the last 12 months, including the construction of a new bulk store which is due for completion in April. Planning and co-operation between the port and marine authorities saw the largest ship to ever call at the port in December. The 13,558gt/2008 built Dijksgracht (above), which is 156.93 metres long, arrived at Ipswich with a shipment of 10,500 tonnes of rice from Texas, USA for the Ipswich Grain Terminal. 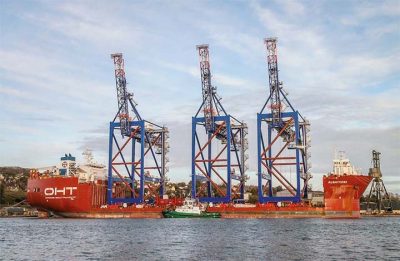 Port of Cork saw three new ship-to-shore container cranes manufactured in Ireland by Liebherr and assembled in Cork Harbour, shipped out from Ringaskiddy’s deep water berth at the beginning of March (above). Destined for delivery to Crowley Puerto Rico Services’ Isla Grande Terminal in San Juan in late March, the 34,925gt/1993 built Overseas Heavy Transport (OHT) vessel Albatross was given the task of handling the three 900t cranes. The units were secured firmly (welded) to the deck of the vessel for the voyage.

The Port of Liverpool was temporarily closed on 23rd February after Storm Doris battered the area with 100mph gusts of wind. Storm Doris was felt most as it tracked across Northern Ireland and northern England, bringing damaging winds, rain and snow to the UK.

Estuary Services Limited (ESL), a joint venture between the Port of London Authority (PLA) and Peel Ports London Medway, is continuing its fleet replacement plan and buying another new pilot boat for its pilot transfer operations serving the ports of London and Medway. ESL currently has a fleet of six vessels including two 17.1 metre ORC class vessels that carry marine pilots from the Kent coast to board ships, in the Thames Estuary.

The new vessel, which is currently in the early build stage, is a £1.3 million ORC 136.E. Designed by renowned French Naval Architects Pantocarene, the vessel is being built by Goodchild Marine Services in Great Yarmouth, who have 39 years boat building experience. The build of each of the new boats in the replacement programme is staggered to give ESL’s crew time to train and adjust as they replace the older vessels in the fleet. The ORC has proven to be ESL’s most efficient pilot boat design with 24% fuel efficiency over the older vessels in the fleet.

The most recent additions to the ESL fleet, Estuary Elan and Estuary Elite, are also ORCs, which like the new vessel feature a unique ‘beak’ bow design, which gives it unmatched all weather capability. The wheelhouse is quieter, vibration-free and more comfortable for crew and pilots.

ESL transfers pilots to more than 10,000 ships in the Thames’ southern approaches every year, including cruise ships, containers vessels, tankers and general cargo carriers. The main pilot boarding station is 8 miles from Ramsgate which the launches reach at a speed of 25 knots. Their top speed is 28 knots.

An update on the latest news from the ports