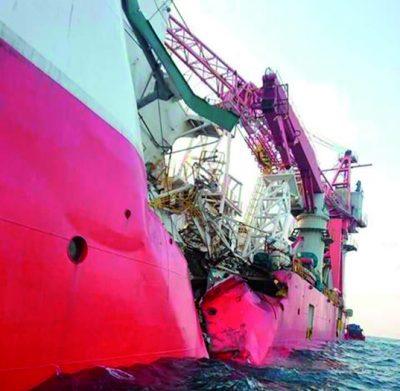 The 27,082gt/2002 built pipe layer Star Centurion, part of the Vallianz Offshore fleet (ex-Lewek Centurion/Helix Ceasar), sank on 13th January following a collision with the 25,118gt/2002 built Pertamina tanker Antea off the Indonesian island of Bintan in the Singapore Straits. The Star Centurion (above) was at anchor and capsized and sank within hours of the collision. The 20 crew on board were rescued by the Singapore authorities after the accident was reported to the International Fusion Centre in Singapore.

On 21st January two ships caught fire in the Kerch Strait near Crimea with ten crewmembers being found dead and 14 being rescued after the incident unfolded. A ship-to-ship gas transhipment was said to be the root cause of the blaze with the ships, the 3,693gt/1992 built Venice (renamed Candy) and the 4,086gt/1990 built Maestro, having a combined crew of 31. The weather was poor and such a cargo transfer is not permitted in that area. Reports suggested that both ships were barred from local ports in connection with U.S sanctions. Revised reports suggested up to 20 seafarers had been killed.

The 7,217gt/2009 built tanker Oriental Nadeshiko ran aground on the river Elbe on the morning of 21st January. The 12,500dwt ship came to grief near Cuxhaven while en-route from Bützfleth, Germany to Tarragona, Spain, laden with 9,000 tons of dangerous goods cargo. The 14,654m3 capacity and 124m long ship was later refloated.

A post-Panamax container crane boom collapsed onto the deck of the 75,246gt/2007 built containership Ever Summit (above) at the Port of Vancouver on 28th January. The ship was berthed at the GCT Vanterm terminal at Port Metro when the incident took place in the early hours.

A fire broke out in the engine room on board Maersk’s 34,202gt/ 2003 built Panamax containership Olga Maersk on 29th January while the vessel was en-route from Panama to Cartagena. The fire was quickly contained and extinguished aboard the 3,000 TEU capacity ship and she went to Puerto de Cristobal, Panama, for examination and repairs. 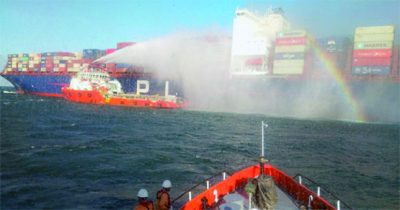 On 31st January yet another fire was reported aboard a container ship. The 109,712gt/2013 built APL Vancouver reported a fire whilst off Vung Ro, Vietnam. The source was in cargo within a container stack just forward of the ship’s accommodation block. A Vietnamese Coastguard vessel reached the scene the next day to assist with firefighting operations whilst Commercial Salvors had also been engaged and were en-route to the 9,300 TEU capacity ship, which had been under way from Shekou to Singapore at the time of the fire.

The latest incidents and accidents from around the world