On 18th July the 2,281gt/2009 built cargo vessel Priscilla (above) went aground on the Pentland Skerries of Caithness, north coast of Scotland whilst en-route from Klaipeda to Silloth. The 89m long ship sustained damage to her hull and initial attempts to free the ship with tugs failed. There were no signs of any major damage, no signs of any pollution and the crew were safe and well.

Kawasaki Kisen Kaisha Ltd. (K-Line) reported on 23rd July that the 17,735gt/2001 built Makassar Highway, operated by its European subsidiary company K Line European Sea Highway Services GmbH (KESS), ran aground off the coast of Sweden whilst inward to the port of Sodertalije from Cuxhaven laden with 1,325 vehicles. The ship has 333,000 litres of fuel oil, 38,000 litres of lubricant oil and 34,000 litres of diesel aboard and further inspections revealed considerable hull damage and some water ingress. Media reports suggested that the ship had navigated an incorrect course for some time prior to the grounding and the Chief Mate had been arrested for allegedly drinking at the helm. The ship floated free herself on 29th July, rather unexpectedly, but her damaged hull leaked around 7,000 litres of oil, most of which was caught by booms placed around the site. On 31st July the ship was towed to Oskarshamn where she arrived on the evening of 1st August after a 30 hour crawl. The emergency tow was organised as the hull damage was worse than anticipated. 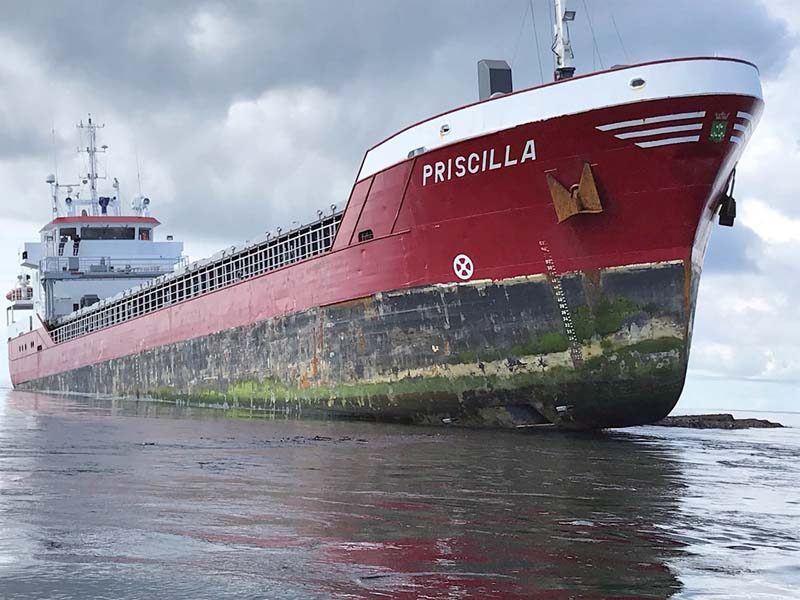 The fire-ravaged bulk carrier Iron Chieftain that suffered a fire at the Port of Kembla on 18th June is to be retired and disposed of as a result of her condition. The blaze had started when the ship was discharging a cargo of dolomite, during which the belt drive system ignited. It took 110 firefighters and two Svitzer firefighting tugs 5 days to bring the fire under control. The decision to withdraw the ship was taken on 10th July.

On 12th July 2018 the 2,194 TEU capacity containership Kea Trader had been aground on a reef in the South Pacific for a year. The ship grounded off New Caledonia during a voyage from Papeete, in French Polynesia, to Nouméa while loaded with 782 containers and flat-racks. In the year since the grounding, the ship has experienced back-to-back cyclones and all round bad weather that has prevented Salvors from boarding the vessel for more than half the time. The ship has been in two sections since November 2017 with removal of cargo and components halted by helicopter when the available deck area dwindled as the vessel deteriorated. Removal of parts of the wreck continues with the project being one of the most complex salvage operations since the Rena off New Zealand.

The Suez Canal, Egypt’s busiest waterway saw a series of mishaps on 15th July that were triggered by the grounding of the 54,182gt/2010 built containership Aeneas.The ship was the 20th vessel in a Southbound convoy of 27 vessels. Initial reports indicate that the ship suffered an engine failure prior to the grounding. Suez Canal tugs towed the stricken ship to the Suez outer anchorage on 16th July and the canal was cleared. All but four of the ships in the convoy were able to continue without much delay. However, the 38,928gt/2001 built bulk carrier Panamax Alexander ran aground that same day and had been following the Aeneas. A ship following the bulk carrier also struck her with two other bulk carriers, the 44,425gt/2017 built Sakizaya Kalon and the 31,538gt/2012 built Osios David, having to anchor in the canal area. The knock-on effects from this period of problems affected at least 70 ships.

A fire broke out once again at a shipbreaking yard in Gadani, Pakistan, on 16th July involving a tanker, the former DS Tankers ship Ada. Pakistani authorities managed to evacuate the workers and there were no casualties reported. The fire was also brought under control and trapped workers were freed. The ship had arrived there in May 2018 and it appears that cutting commenced before oil cleaning operations had been completed. Demolition of tankers and LPG carriers was banned at the country’s Gadani shipbreaking yards following incidents caused by a lack of safety measures such as the explosion on 1st November 2016 that killed at least 28 workers and a fire on 9th January 2017, which took the lives of another five workers. The ban was lifted in April 2018.

Various shipping incidents from around the world