On 18th April the 46,885gt/2013 built Crystal Sunrise, a very large gas carrier, was involved in a collision with an aframax tanker off Singapore. The 82,394m3 vessel sustained damage to a ballast tank and leaked 1,796 tonnes of butane before the leakage was stopped. The incident took place one nautical mile south of Tuas Extension at 02.30. The other vessel involved, the 57,022gt/2003 built Astro Saturn, sustained damage to her port anchor and bow.

The fire ravaged containership Maersk Honam arrived at Jebel Ali Port on 23rd April under tow with hotspots still burning on the vessel. The 15,262 TEU capacity ship was hit by a serious fire on 6th March whilst 900nm southeast of Salalah, Oman, which left four dead and one missing from a crew of 27. Work to extinguish all fires and stabilise the vessel was expected to take 4-5 weeks. 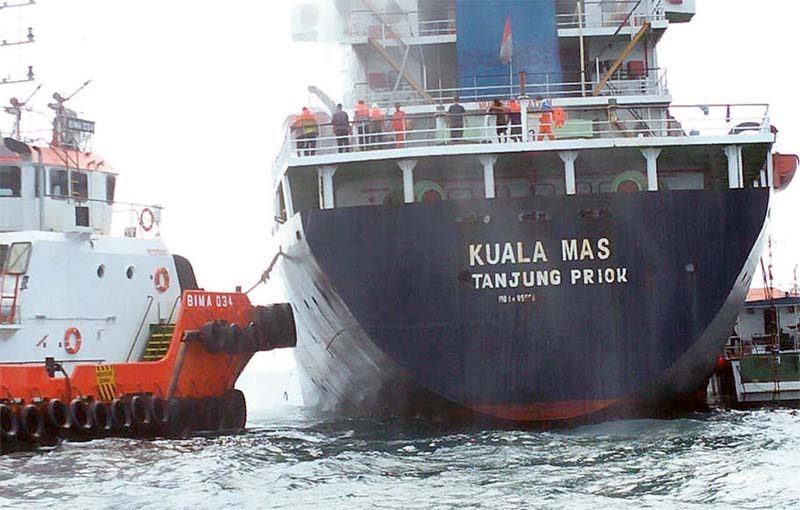 On 27th April, the 6,007gt, 116 meter long container ship Kuala Mas (above) caught fire near Nirwana Island, Kepulauan Seribu, Teluk Jakarta, Indonesia. The Kuala Mas has departed from Jakarta with 18 crew bound for Malahayati, Banda Aceh with 45 containers. An electrical short in the engine room ignited the blaze which quickly spread into additional compartments. The 18 crew on board weren’t able to extinguish the fire and requested assistance. Authorities dispatched several vessels to the scene and began a joint fire fighting effort through the superstructure. The fire fighters were able to extinguish the blaze, but the Kuala Mas sustained significant damage. There were no reports of injuries to any of the crew. 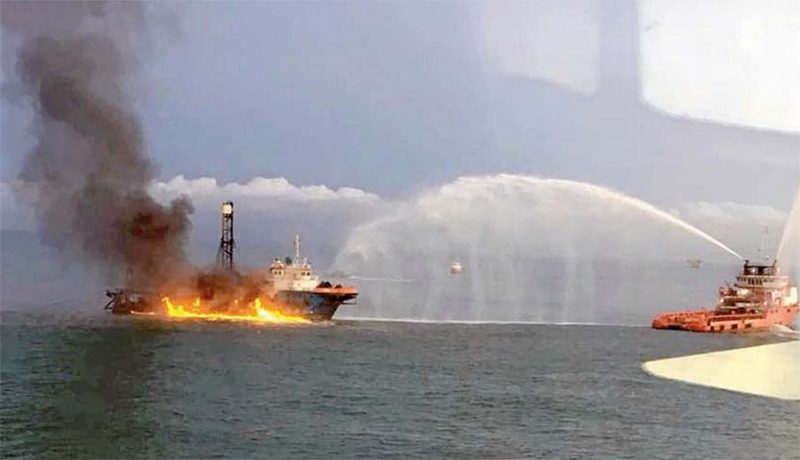 On 17th April the 60 meter long research vessel Geos caught fire off Kuala Baram, Malaysia. The fire started after an explosion in the engine room while doing offshore oil exploration. The fire quickly engulfed the vessel forcing the crew to jump overboard into the sea. Authorities were alerted and quickly launched a search and rescue operation. Rescuers arrived on scene pulled 37 of the 38 crew to safety. Two crew sustained injuries and were taken to hospital for treatment but one crew person was reported as missing.

On 2nd May, the 188 meter long, 7,885 dwt ro-ro passenger ferry Finnfellow collided with a quay at Långnäs, Åland Islands. The Finnfellow damaged a fender which broke off and sank in the harbour. No reports of injuries or pollution released from the ferry. The port of Långnäs was closed to traffic for several hours until the fender could be pulled out of the sea.

On 21st April, the 175 meter long, 27,348 dwt bulk carrier Rauli N collided with the southern lock of the Kiel Canal at Brunsbüttel, Germany. The Rauli N was headed for Bremen when its port stern struck the side of the lock wall. The vessel hit with enough force to cause part of the masonry to collapse and fall into the lock. The Rauli N sustained hull damage including several large dents and a hull breach above the waterline. The water police allowed the Rauli N to continue on to Bremen where investigations into the incident will continue. Traffic on the lock was halted until a response team can arrive on scene and begin repair work.

On 20th Apri, the 132 meter long, 4,700 dwt tanker Inzhener Nazarov became stuck in the ice on the Volga River in the Saratov Reservoir, Russia. Unable to free itself, the vessel requested assistance. An icebreaker was dispatched from Rosmorport to break free the tanker.