The 12,974gt/2010 built bulk carrier Nordika Desgagnes suffered a steering failure off Nova Scotia on 15th March. The 143m long ship was taken under tow off Cape Breton, Nova Scotia and the

On 19th March the 88,586gt/2012 built and 8,000 TEU capacity Hapag-Lloyd ship Tolten didn’t make the best arrival at the Port of Karachi when she side-swiped the 71,786gt/2009 built moored container vessel Hamburg Bay whilst manoeuvring to berth ahead of the latter ship. Several containers toppled from the Tolten into the harbour causing the port to be closed until they were retrieved. 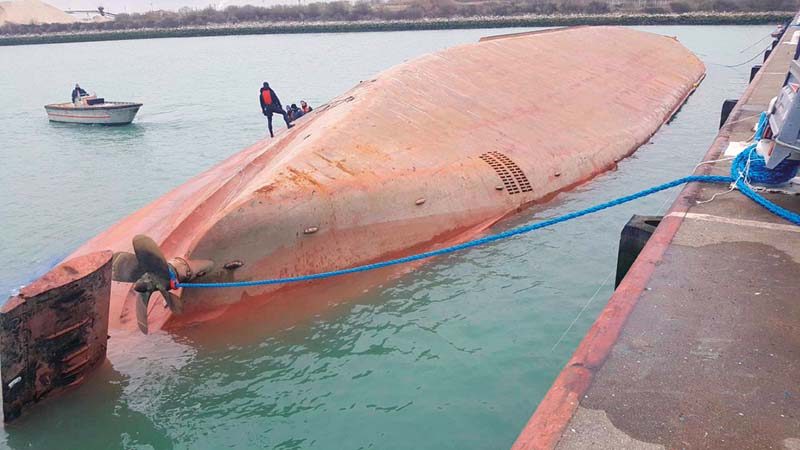 On 20th March the 1,521gt/1985 built low air draught coaster Britannica Hav was struck by the Belgian flagged fishing vessel Deborah at 1540 local time about 50 nautical miles northeast of Cherbourg, France and to the south-west of the Dover Strait. The coaster sustained a hull breach amidships on her port side and the ingress of water caused the ship to capsize. The seven crew from the Maltese-flagged freighter evacuated to two life rafts and were recovered by the fishing vessel. The wreck was drifting and the French rescue tug Abeille Liberté was dispatched to the scene and towed the upturned wreck to Le Havre (above).