On 11th February the 1,536gt/1984 built Danica Hav ran aground on the Ouse River near Goole, just off the Goole South Pier. The cargo ship remained aground until the next morning when she was refloated.

The 60,178gt/2008 built SCF crude oil tanker Zaliv Amurskiy, owned by Russian operator Sovcomflot, grounded in the Suez Canal on 13th February due to a steering failure. The ship encountered problems at the 41km mark whilst heading northbound as the 19th in a convoy of 25 vessels. Suez Canal tugs managed to refloat the 104,542dwt tanker, she was towed to Port Said and the canal traffic returned to normal the next day.

On the night of 19th February the 11,662gt/2004 built and 1,000 TEU capacity container feeder ship Akacia struck a lock at the Baltic Sea entrance to the Kiel Canal, rupturing the gate with her bulbous bow. Eyewitness reports indicated that the ship had accelerated as she approached the lock, reaching a speed in excess of 10 knots. The Akacia’s Master dropped both anchors in an attempt to slow her, but she maintained forward momentum and could not be stopped before striking the gate.

One of Europe’s other shipping canals, the Corinth Canal, was closed on 26th February after a rock fall was triggered by heavy rainfall. The debris temporarily blocked the 6.4km long transit route, used by around 11,000 ships annually sailing between the Eastern Mediterranean and the Black Sea, for around 15 days. The canal saves a 434-mile voyage around the Peloponnese Peninsula.

At the end of February, the 9,998gt/2008 built container vessel Spica was damaged by a drilling rig in the port of Tenerife. The ship was berthed at the TCT Terminal de Contenedores de Tenerife and suffered severe water ingress and a breach of the hull below the water line which was repaired by divers. The drilling rig West Taurus broke free from its mooring lines in strong winds and struck the ship plus another drilling rig, the West Eminence.

A ship pilot based at the Port of Lisbon in Portugal tragically lost his life while he was disembarking from the 54,401/2000 built containership Singapore Express. Attempts to recover the body were hampered by bad weather. The pilot, identified as Barra Miguel Conceição, died after falling from the 66,793dwt vessel into the water in Cascais Bay in the early morning hours of 28th February.

The Singapore Express continued her journey to Tanger Med, where she arrived on 1st March.

On 3rd March the 171,542gt/2008 built container ship Eugen Maersk suffered a technical issue on the River Elbe whilst outward bound from Hamburg, Germany. This closed the river and blocked ships for three hours, while tugs were used to secure the ship during repairs. Once the problem was fixed, the ship continued her voyage to Antwerp, Belgium. 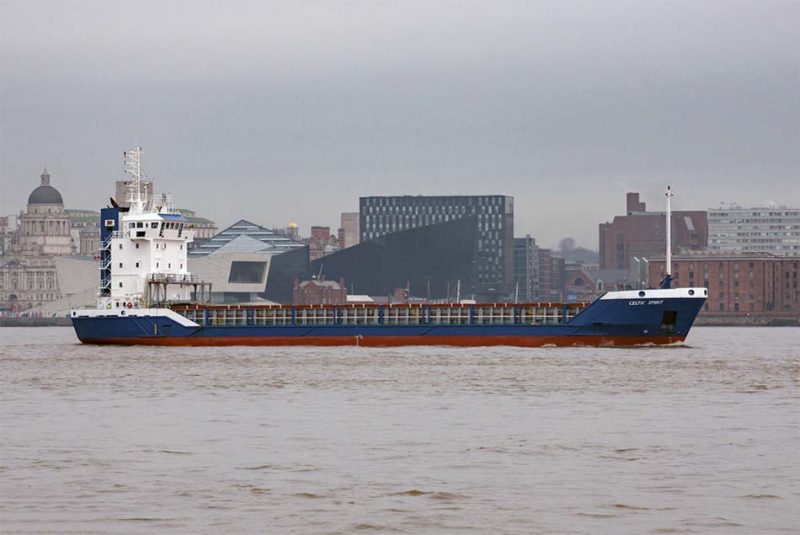 On 1st March the 2,840gt/1996 built Celtic Spirit (above) dragged her anchor and collided with two vessels in the Hawke Anchorage on the River Humber during a period of adverse winter weather.

In early March the 3,991gt/2006 built and 108m long/6,232dwt tanker Northsea Rational ran aground on the Kiel Canal near Horsten, Germany. The ship suffered a technical failure and became disabled. Unable to control her steering, the ship ran onto the northern bank of the canal and the tug Holtenau went to her aid. 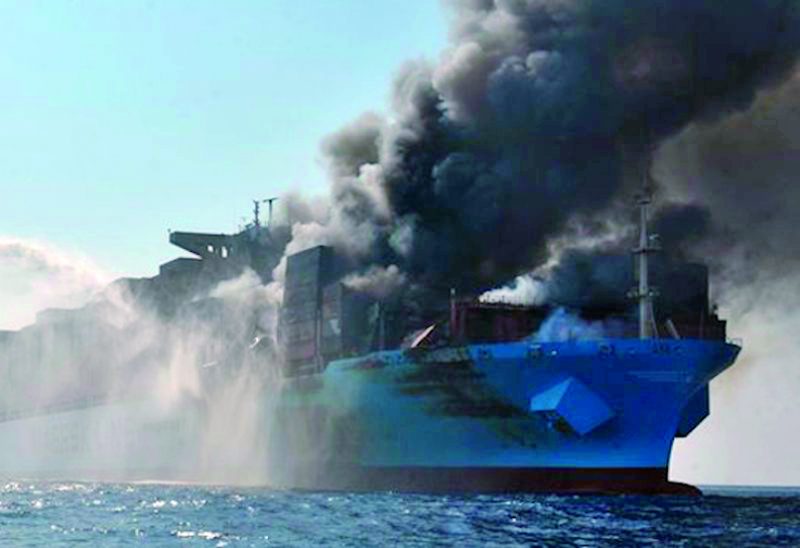 On Tuesday 6th March at 3.20pm GMT, the Maersk Line container vessel Maersk Honam reported a serious fire in a cargo hold. En-route from Singapore towards Suez (above). The vessel was 900 nautical miles southeast of Salalah, Oman. After being unsuccessful in their firefighting efforts, the crew sent out a distress signal and a total of 23 crew members were safely evacuated to the nearby 42,110gt/2010 built vessel ALS Ceres, which arrived at the scene around 1830 GMT and the following day a Thai national crewman tragically passed away. Regrettably, four crew members were missing at that time and three have since been found dead The fire aboard the Maersk Honam continued out of control and the situation of the vessel was reported as very critical. The cause of the fire was unknown at the time of writing. The fire had engulfed the bow section of the ship, covering an area of around 100m by 60m.