On 9th January the 80,942gt/1998 built Maersk Karachi collided with the 1,995gt/1985 built GT Oguz Sofuoglu in the Black Sea. Both ships were en route to Constantza, Romania, when they came into contact 14 miles off the coast.

On 14th January the burning 85,462gt/2008 built tanker Sanchi sank in the East China Sea having been ablaze since a collision with the 41,073gt/2011 built bulk carrier CF Crystal on 6th January.

Prior to the sinking, a tower of billowing black smoke had reached as high as 1,000m from sea level with flames all around the ship as well from the burning oil slick. The sinking followed another explosion on the dying ship as firefighting vessels tried to contain the flames. The tanker left behind a 10 mile long and 4 mile wide oil slick in what is the biggest tanker spill since 1991, when 260,000 tonnes of oil leaked off the Angolan coast. The ship’s last confirmed location was about 315 km (195 miles) west of Sokkozaki on the island of Amami Oshima, one of the northern islands in the Ryukyu island chain that includes Okinawa. Strong winds had pushed the ship away from the Chinese coast, where the incident happened, and into Japan’s exclusive economic zone (EEZ). At the time of writing, Chinese salvage teams had recovered three bodies from the 30 Iranian and two Bangladeshi crew members. Iranian officials said the remaining crew members were presumed dead whilst the lifeboat davits were clearly still in the upright position with lifeboats burnt away prior to the sinking. Iran’s government declared a day of national mourning to honour “the brave mariners who died in the course of their mission to advance the country’s goals and suffered a terrible disaster and joined the martyrs.” The tanker, owned by National Iranian Tanker Co., was carrying almost 1 million barrels (136,000t) of condensate, an ultra-light crude oil, to South Korea.

As the result of a storm the geared general cargo ship Diana became stranded on the beach near the port of Haifa, Israel. The 9,556gt/2007 built ship had arrived from Dunkerque and most probably dragged her anchor during a storm that hit the region 19th-20th January. The vessel remained at her unfortunate location until finally towed clear by the salvage tug Eas (1,191gt/1975 built) and other vessels on 6th February. The vessel was then towed to Israel Shipyards in Kisho.

On 23rd January the 882gt/1982 built Ocean Spirit 1 was refloated near Charlotte Amalie Harbour after grounding off St. Thomas in the U.S Virgin Islands. The Togo flagged vessel grounded just off the entrance of the harbour’s East Gregory Channel whilst laden with an estimated $1 million of cargo. 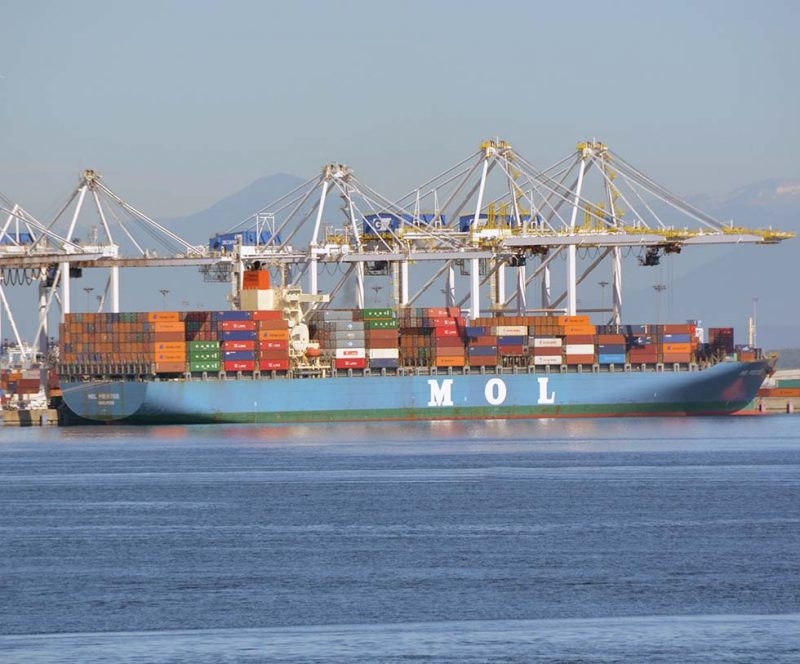 The next day, the 1,524gt/1988 built and 74m long cargo vessel Havbris ran aground near Averøy, Norway. The vessel was bound for Åheim from Trondheim when she ran onto rocks and suffered slight water ingress, but flooding was kept under control by the vessel’s pumps. A lifeboat and a tug attended the scene and the tug pulled the Havbris free, after which she continued to Kristiansand under her own power prior to undergoing a hull survey.

The 71,902gt/2006 built, 6,350 TEU capacity and 293m long containership MOL Prestige (above) was adrift approximately 207 nautical miles southwest of Haida Gwaii, British Columbia, on 1st February after suffering an engine fire which knocked out power to the vessel. Coastguard crews air lifted two crew members from the vessel for medical care and the Canadian Coast Guard Ship Sir Wilfrid Laurier was sent to assist the vessel along with other aircraft. The fire was brought under control and the tug Denise Foss took the MOL Prestige under tow destined for Constance Bank anchorage.

On 5th February came the news that the 28,054gt/2009 built product tanker Marine Express had been missing since 2nd February. The ship had 22 Indian crew members aboard and contact was lost with her in the Gulf of Guinea, sparking fears that the vessel had been hijacked. Anglo-Eastern then confirmed that they had lost contact with the ship while she was at an anchorage in Cotonou, Benin. The ship was reported as back under the command of her Captain on 6th February after Pirates had vacated the ship.

Accidents and incidents around the world