Spain’s Ministry of the Interior announced on 5th December that it had seized the largest haul of cocaine so far this century (5,800kg with a street value of €210 million), and the largest-ever involving a container ship. The ship was identified as the 26,374gt/2014 built Banak which had travelled from Medellin in Colombia and had a cargo of bananas destined for El Prat de Llobregat. The ship was seized at Algeciras on 28th November.

On 6th December the 96,801gt/2012 built containership Helsinki Bridge broke free from her moorings at the Paul W. Conley Container Terminal in Boston, USA, during strong winds and drifted into the main shipping channel before being taken in hand by harbour tugs. A Pilot boarded the vessel, and along with the container ship’s crew, they were able to safely escort the vessel to Broad Sound, where she remained at anchor prior to routine checks being made.

On 8th December came a stark reminder of the dangers faced by Pilot boat crews and Pilots when two Finnish pilot boat operators died after the boat they were on capsized and sank in the Gulf of Finland. Pilot Boat L242, a 15.4m long and 5.1m beam craft which had been in service since autumn 2015, overturned off the island of Emäsalo as she headed to pick up a pilot at the northern pilot boarding station. 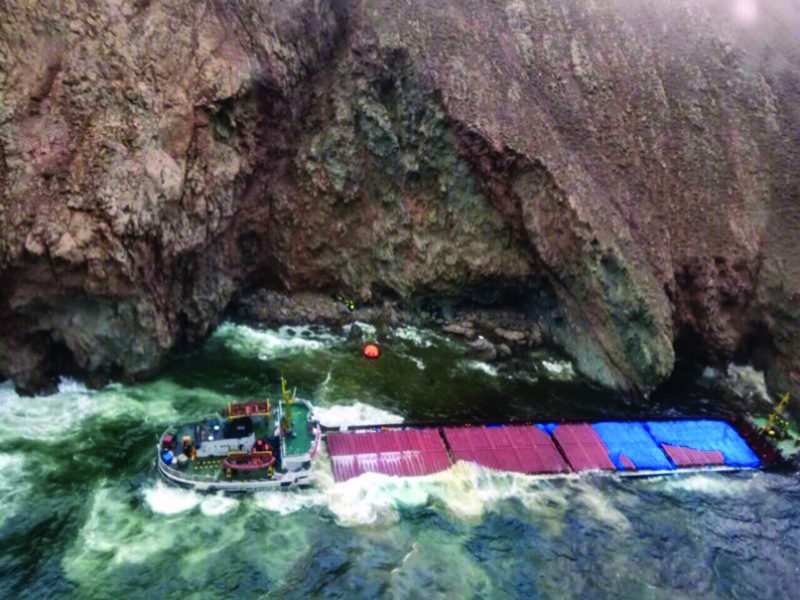 The Panama-flagged cargo ship Little Seyma (above) was wrecked on the rocky coast of the Greek island of Traganisi near Mykonos on 22nd December during a voyage from Russia to Cyprus. All 12 crew were able to scramble ashore from the 2,466gt/1980 built ship that was laden with 2,700t of sunflower seed.

On 14th December a brand new bulk carrier ran aground in the Columbia River and started taking on water in two forward compartments, not the ideal start to her working life. The 35,824gt/2017 built KM London ran aground near Crims Island at mile marker 54.5 of the Columbia River while outbound with a cargo of wheat. Crewmembers aboard the vessel were able to get the flooding under control and the ship was refloated on 15th December and assisted by three tugs to Longview, Washington. The ship is owned by Taiwan-based Kuang Ming Shipping and was only delivered in November 2017.

The 30,057gt/2005 built and 190m long bulk carrier Ocean Crown ran hard aground in Klaipeda, Lithuania, on Christmas Eve after dragging her anchor in strong winds. The vessel was bound for Klaipeda but was prevented from entering port due to the weather and had to drop anchor. Unfortunately, the anchors proved no match for the strong winds and the vessel ran ashore when her propulsion system failed to save her. 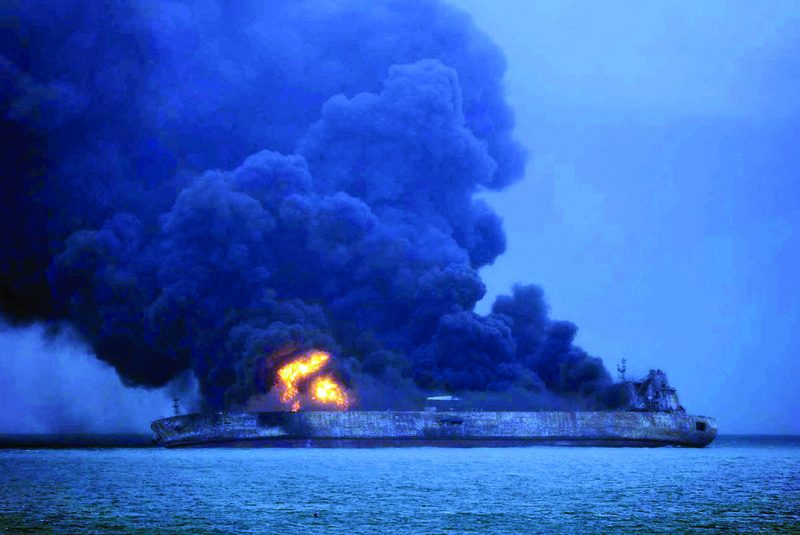 On 6th January, the 85,462gt/2008 built Panamanian registered tanker Sanchi (above) and the 41,073gt/2011 built bulk carrier CF Crystal carrying 64,000 tonnes of grain grain collided 160 nautical miles east of the mouth of the Yangtze River. The accident caused the tanker to erupt in flames, list to starboard and the crew of 32 were reported as missing. The crew of 21 of the CF Crystal were rescued. Efforts were made by the Chinese Coastguard to contain the oil spill from the burning Iranian tanker but she subsequently sank. She had been bound for South Korea carrying 136,000 tonnes of condensate, an ultra light crude oiland is managed by the National Iranian Tanker Co (NITC).