Teekay’s former Aframax tanker, the 76,824gt 1995 built Randgrid, suffered an engine room fire whilst undergoing conversion at Mekjarvik Yard, Stavanger, on 10th September. A total of 138 workers were evacuated and 20 remained on board to assist firefighters. The fire was extinguished successfully and 7 people received medical treatment.

The brand new 210,890gt 21,413 TEU OOCL Japan, being enroute from Singapore to Felixstowe, ran aground during the transit of the Suez Canal on 18th October (above). The ship was stuck on the embankment and was perpendicular to the fairway. The Maersk Kimi, which was following the container ship, was just able to stop in time. Tugs were deployed to pull the OOCL Japan clear.

The 25,145gt 2017 built containership Kea Trader, which ran hard aground on a reef off New Caledonia on 12th July, will have to be recycled according to her owner, Lomar Shipping. The decision was made following the recent damage assessments that have shown that the 2,194 TEU ship cannot be repaired with underwater inspections having identified extensive damage to the ship’s hull, rudder and propeller. There is water ingress in all five cargo holds and evidence of further structural damage within the vessel and additional deterioration being caused whilst the ship remains on the rock reef during the rough swells. Salvage company Ardent will continue to work to refloat the Kea Trader and salvage her remaining cargo, while also protecting the marine environment. On 9th October they attempted to move the ship but, although four tugs were deployed, the operation was not successful.

On 7th October the 158m long and 13,965dwt container ship Containerships VII caught fire in the Gulf of Finland. The ship was en-route to Helsinki from St. Petersburg when a fire broke out in a generator in the engine room. The crew was quickly able to contain the blaze and extinguish it. The 10,499gt 2002 built Containerships VII dropped anchor off the island of Seitskär to conduct an inspection and, after a few hours, the vessel continued her journey to Helsinki. 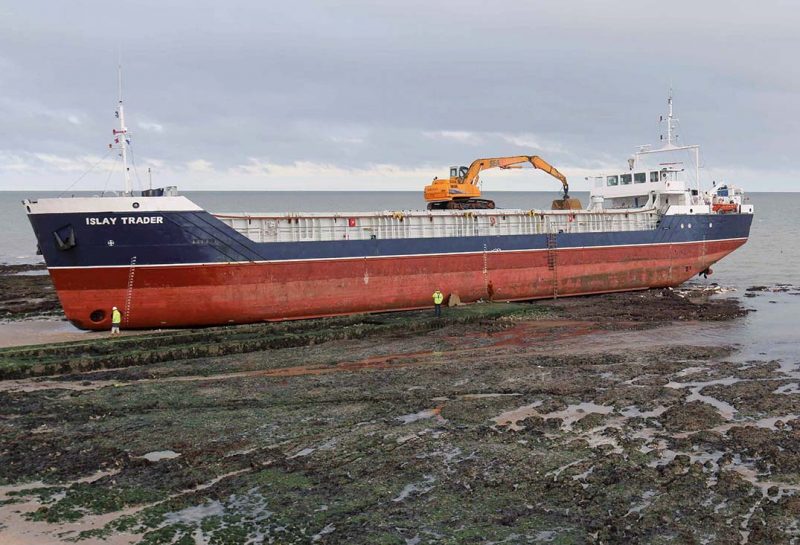 On 8th October the 1,512gt 1992 built Islay Trader (above) ran aground near Margate Harbour, some 30-50m from shore at around 0300 having been anchored in Margate Roads when she dragged her anchor and ran aground on the shoreline 100m from the lifeboat station. The 75m long ship was refloated later that day on high tide. The vessel is operated by Faversham Ships and was carrying a cargo of broken glass. 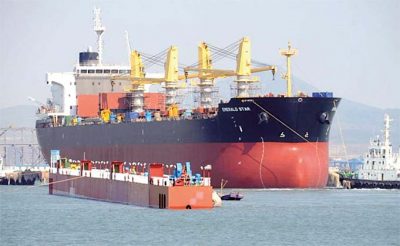 Eleven crew members of a Hong Kong-flagged bulk carrier were reported missing on Friday 13th October after their ship sank off the coast of the Philippines in what appeared at the time of writing to be a possible case of nickel ore liquefaction. The 57,000dwt Emerald Star (above) issued a distress call with 15 of the 26 crew being rescued by passing ships. The 33,205gt 2010 built ship had been underway from Buli, Indonesia, to Lianyungang, China with a cargo of nickel ore. Nickel ore, a high-risk Group A cargo in the International Maritime Solid Bulk Cargoes Code, is notoriously known to be highly susceptible to liquefaction which can lead to cargo shift and stability issues, and in the worst case can cause a ship to capsize at a moment’s notice. The Emerald Star is operated by Stellar Ocean Transport of Dubai.