Notable Incidents Wightlink’s 2,546gt/2008 built Wight Sky suffered a fire in one of Her two engine rooms upon approaching Yarmouth from Lymington in gale force conditions on the night of 12th September. The Chief Engineer was in the affected area at the time and sustained cuts and burns. He was taken to hospital upon arrival at Yarmouth and Island based fire crews assisted in extinguishing the fire. Passengers and vehicles were safely disembarked.

On 14th August the 150,853gt/2011 built container ship CSCL Jupiter ran aground near Bath on the Westerschelde. The 366m long and 13.7m draught vessel was en-oute from Antwerp to Hamburg. After the grounding, several tugs assembled at the ship and all traffic was stopped in the Nauw van Bath awaiting the first attempt to refloat the ship around high water at 8pm that evening. The ship was held in place by several tugs during the day with 17 tugs working to successfully refloat her at 9.10pm that evening. The ship returned to Antwerp for inspection after her grounding. 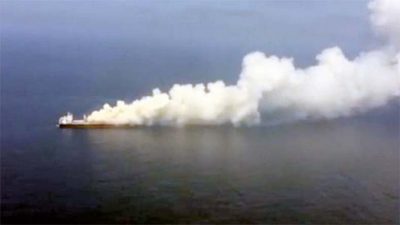 Bibby Line’s 33,042gt/2012 built and loM registered bulk carrier Cheshire (above) caught fire off the Canary Islands on 12th August and on 19th August was reported as being 95 nautical miles south of El Hierro Island, the westernmost in the Canary Islands archipelago. A salvage tug, the Red Sea Fos was escorting the ship assisted by the Spanish Marine Search and Rescue tug Miguel De Servantes. Two more tugs were also sent to assist, namely the offshore supply vessel the VB Hispania and the Moroccan-flagged port tug Jacques 2. The chemical reaction fuelled fire and explosions was reported as being out of control and growing with the toxic fumes billowing from the cargo hold making it impossible to tackle. Due to the distinct danger of a possible major explosion, considering that the cargo was 42,000 tonnes of ammo­ nium nitrate, the ship was described as a floating bomb. 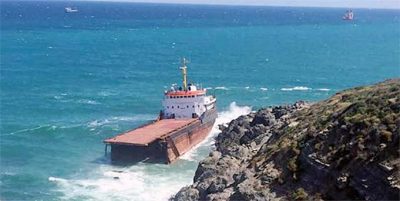 A Mongolian-flagged dry cargo vessel split in half off the coast of the Istanbul district of Sar1yer in Turkey on 26th August. The 2,466gt/1975built and 114m freighter, named Leonardo (above), was heading for repairs before she broke in two off Demircikoy. Eleven crewmembers were rescued by coastal safety units dis­ patched from eight coast guard vessels. One section of the vessel was moored in the Turkeli anchorage while the remaining section slowly sank. 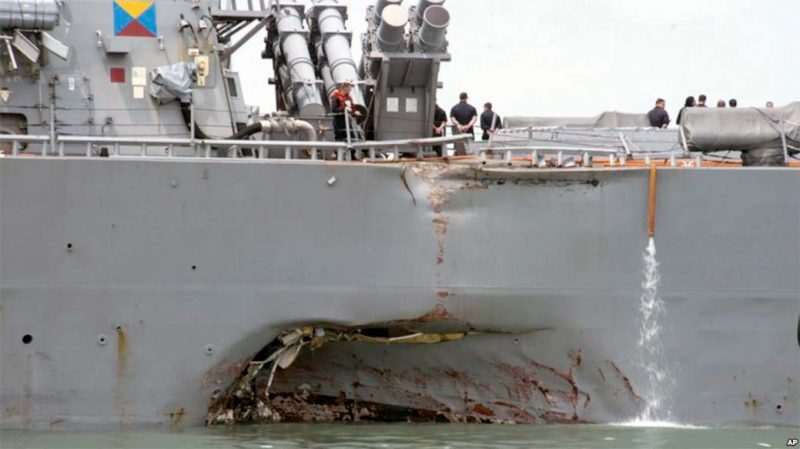 Ten sailors were missing and five were injured in a collision between the guided-missile destroyer USS John S. McCain (above) and the 30,040gt/2008 built oil tanker Alnic MC while underway east of the Straits of Malacca and Singapore on 21st August. Four of the injured were medically evacuated by a Republic of Singapore Navy Puma helicopter to a hospital in Singapore for non-life threatening injuries. This was the second collision between a US Navy ship and a merchant vessel in Asian waters in just over two months. On 17th June the Philippine-flagged containership ACX Crystal, operated by Japan’s NYK Line, and the US Navy’s guided missile destroyer USS Fitzgerald collided some 56 nautical miles southwest of Yokosuka, Japan, killing 7 US navy sailors.

Shipping accidents and incidents over the last month