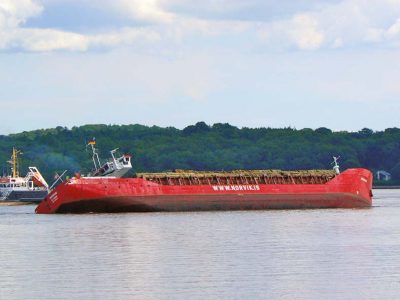 On 14th July the 2,236gt/1987 built general cargo vessel Mosvik (above) got into a spot of bother and discharged part of her cargo near the entrance to the Kiel Canal having suffered a 30-degree list. It was estimated that 25-30 bundles of wood were released from the ship’s deck in order to keep her afloat. Vessels were sent to assist and to ensure the safety of vessel traffic in the waterway. Three days later the ship was on the naughty step again when she hit a quayside at a speed of 2 knots. The 2,850dwt ship had been on her way to Riga, Latvia. The initial incident was said to be the result of ballast tank issues.

The 23,273gt/2012 built bulk carrier Pacific Cypress caught fire while berthed in Hakodate, Hokkaido on 17th July. The fire started in the vessel’s engine room and quickly spread out of control. The 17 crew were safely evacuated while local fire brigades fought the blaze, extinguishing the fire after several hours.

The 10,318gt/2012 built container ship Heinrich Schepers ran aground along the Kiel Canal near the bridge at Grünental, Germany, on 18th July. The ship was en-route to Kotka from Hamburg when she suffered engine failure. The crew attempted an emergency deployment of the anchors, but the vessel ran up onto the northern embankment and became stuck. Traffic was halted on the canal until the ship was moved as she was blocking the fairway.

On 19th July the 7,852gt/2006 built containership Samskip Courier collided with the 369gt/1977 built tug MTS Viscount in the Dover Straits between Dunkerque & Dover. The containership was able to continue her journey from Tilbury to Rotterdam but the towing equipment of the MTS Viscount was damaged although the vessel itself was undamaged. The force of the collision made the tug to release the towing cable. The tug was towing floating pipes from Rotterdam to Arzew, Algeria with other tugs, including the 100gt/1981 built MTS Taktow, being sent to assist.

In late July the 39,964gt/2004 built dry bulk vessel Melite ran aground off the coast of Pulau Laut, Indonesia. Owned by Diana Shipping, the ship reportedly suffered hull damage as a result of the grounding. The Panamax bulker is chartered to Uniper Global Commodities of Germany and had departed Singapore on 1st July for China, from where she departed on 12th July. Reports suggest that the single-hulled ship had been anchored where she grounded on 20th July. 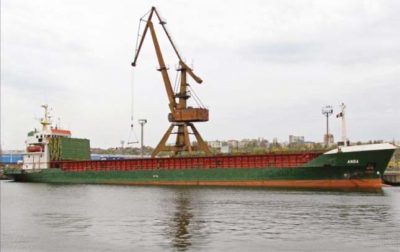 The 80m long, 2,184gt/1988 built cargo vessel Anda (above) sank in the Black Sea near Sevastopol, Crimea on 28th July. The vessel had departed from Kerch bound for Tripoli with a cargo of wheat and sailed directly into the path of a storm. The ship began to list and the 9 crew abandoned ship with some escaping in the lifeboat and others into the liferaft before the ship capsized and sank.

Tynemouth RNLI received a mayday call from the 8,691gt/2011 built dive support vessel Nor Da Vinci on 31st July when a fire broke out in her engine room. The Nor Da Vinci had left Blyth harbour and was five nautical miles from the mouth of the River Tyne. Once the source of the fault was found, the ship continued on her way and the lifeboat returned to base.

Mercosul’s 25,888gt/2009 built and 2,478 TEU capacity container vessel Mercosul Santos collided with a tug pushing 9 barges on the Amazon River near Obidios, Para State, Brazil, on 2nd August as she headed for Manaus. There were 11 people on board the tug and barges, but only 2 were reported as being rescued. The operator’s parent company is Maersk Line with Mercosul due to be sold to CMA CGM. Reports suggested that one barge broke free and strayed into the path of the ship causing the incident. This barge sank and another became entangled around the ship’s bow.

Various accidents and incidents from around the world