The oil tanker Putri Sea sank in Malaysian waters some 4.6 nautical miles southwest of Tanjung Pengelih, Johor on 15th June leaving six crewmen missing. The Equatorial Guinea-flagged tanker is believed to have suffered an explosion in the engine room and subsequently sank. On 18th June the Malaysian Navy located an underwater object, believed to be the missing Putri Sea. Divers were deployed to confirm the identity of the wreck.

The 33,239gt/2012 built bulk carrier Global Laguna suffered a fire in her cargo hold during the discharge of a cargo of steel scrap on 22nd June. The vessel, under the control of Nippon Yusen Kabushiki Kaisha, had previously called at Ghent, Belgium. She was offloading 45,000 tonnes of scrap while docked at Iskenderun, Turkey, when the fire occurred. The crew and stevedore emergency duty teams executed the fire extinguishing operation, joined by firefighters from the shore side and tugs deployed from the port. The Iskenderun Harbour Master cancelled permission for the vessel to depart until the cause of the fire was known. 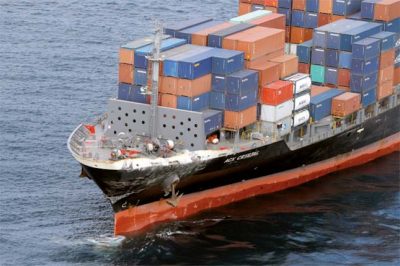 Early on 17th June seven U.S naval personnel were killed and three were injured out of a crew of 300 after the Philippine-flagged, 29,060gt/ 2008 built and 2,858 TEU capacity containership ACX Crystal (above) collided with the U.S warship USS Fitzgerald off the coast of Japan. The collision took place 56 nautical miles southwest of Yokosuka, Honshu leading to substantial damage to the warship’s forward starboard side above and below the water line. A large puncture below the water line resulted in flooding to two berthing spaces, a machinery space and the radio room. The ACX Crystal was chartered to NYK at the time. After receiving a call for assistance from the U.S naval forces, the Japanese Coast Guard dispatched two vessels to the scene, while the Japan Maritime Self Defence Force deployed three vessels, two helicopters and a search and rescue aircraft. Another U.S warship in the vicinity, the USS Dewey, and a U.S navy aircraft, also assisted with operations. Assisted by tugs, the stricken warship returned to Yokosuka where divers inspected the damage, made repair plans and continued to search for missing crew onboard. The three injured crew, including the warship’s commanding officer, were evacuated by helicopter to U.S Naval Hospital Yokosuka. Sadly, the bodies of seven missing crew were found in the flooded compartments.

On 26th June the 3,987gt/1989 built tanker Rama 2 sank in the Gulf of Aden. The ship issued a mayday call in the morning, reporting a severe list to starboard. Naval ships, a helicopter and a maritime patrol aircraft were deployed as part of the search and rescue operation some 120 nautical miles off Yemen’s Socotra Island plus three merchant ships joined the search in harsh conditions and 5 metre seas. All crew were reunited aboard the 13,122gt/2016 built tanker MTM Tortola and recovered to Salalah in Oman. 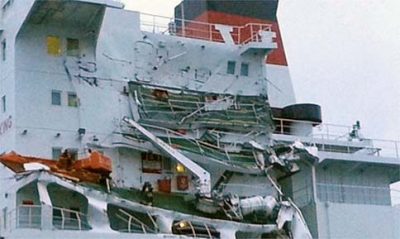 A bulk carrier and an oil tanker collided in the Dover Strait in the early hours of 1st July with both vessels sustaining damage but there was no water ingress, pollution or injuries among the crew. A French tug attended the scene. The vessels involved were the 30,341gt/2011 built tanker Seafrontier (above) and the 41,605gt/2013 built bulk carrier Huayang Endeavour. The tanker was loaded with 37,953mt of petroleum and the bulker was in ballast. The Huayang Endeavour was en route to Lagos and the Seafrontier was en route to Puerto Barrios, when they collided.

On 12th July the newly-built Maltese-flagged containership Kea Trader ran aground off New Caledonia after hitting the Durand Reef, some 100km southeast of the island of Mare. The 18 crew members on board were reported safe.