On 10th April the heavy load carrier Rotra Vente (subject of a recent Newbuild of the Month) collided with two Maersk drilling rigs at the Port of Esbjerg in Denmark. The 6,564gt/2016 built ship suffered engine failure and blackout whilst manoeuvring to leave the harbour. The failure left the vessel adrift in a strong wind and on a rising tide, which pushed the ship towards the drilling rigs Maersk Resolve and Maersk Resolute, which were docked at the port. The crew of the 141.50m long Rotra Vente dropped anchor, while the local authorities started evacuation of the rigs. The vessel dragged her anchor and collided with the helipad of one of the rigs. The rising tide caused the ship’s mast and antenna to become entangled in the platform, which hampered the salvage work. 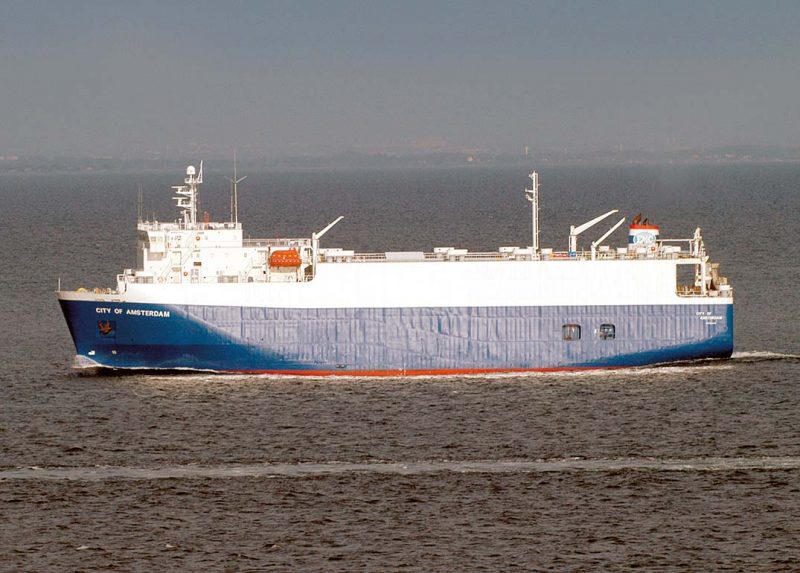 Nissan Motor Car Carrier’s 9,950gt/1999 built City of Amsterdam (above) and Conmar Shipping’s 10,585gt/2012 built containership Conmar Bay collided in the Kiel Canal in the early hours of 22nd April. A number of containers fell overboard from the Conmar Bay and the car carrier suffered a 30-50m long tear in her port side superstructure.

The 3,113gt/1986 built container ship Southern Phoenix sank in Suva Harbour, Fiji, on 5th May. The ship had completed her cargo operations around midnight and thereafter received bunkers. Upon completion of bunkering at 0800 the vessel listed rapidly to port and began to sink. To ensure the vessel did not sink at the berth, creating berth congestion, the vessel was immediately towed away by the port’s tugs and finally sank around 100m away from the King’s Wharf. The crew were unable to control the situation as the vessel continued to take in more water, further listing to the port side. All the crew members abandoned the vessel before she sank. An imbalanced load is thought to have caused the incident.

On 19th April up to 7 crew members remained missing after the Panama-flagged general cargo ship Geroi Arsenala sank in the Black sea. The search was hampered by severe weather conditions at the location and the 2,850dwt ship split in two and sank.

Knutsen OAS’ 110,920gt/2010 built Sevilla Knutsen arrived at Cebu on 24th April for repairs having been holed at the bow after hitting an uncharted reef south of Guam as she sailed in ballast from Japan to Australia. 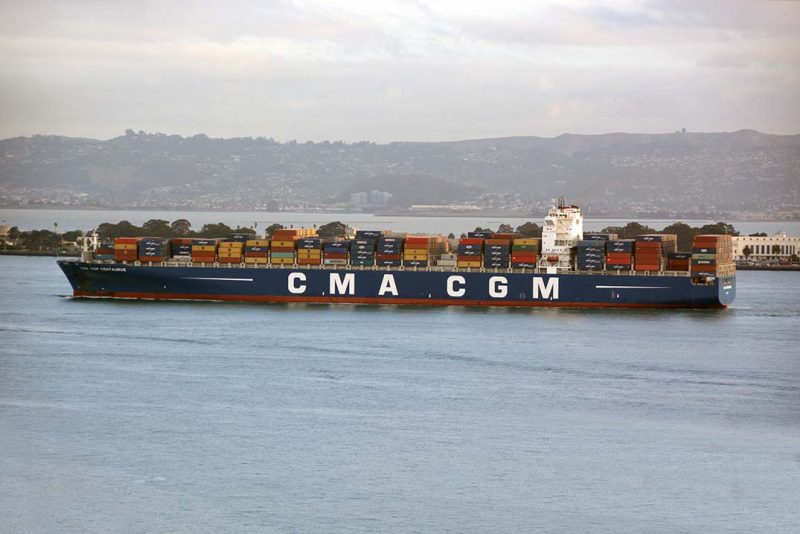 CMA CGM’s 113,332gt/2011 built CMA CGM Centaurus (above) made contact with the quay and a ship-to-shore crane while berthing at Terminal 1, Jebel Ali Port in the United Arab Emirates on 4th May, causing the giant crane to collapse. A second crane was also shifted off its rails during the incident but remained upright and stable. As many as 10 people were injured in the incident, however none seriously. The ship continued on her way a few days later.

The 10,629gt/1993 built cargo vessel Uruguay Reefer was abandoned in the South Atlantic according to reports on 8th May after uncontrolled water ingress. The vessel, which was loaded with a cargo of frozen squid and krill, collided with floating ice and suffered underwater breaches. The Master decided to alter course for the Falkland Islands and reported the accident to the local authorities. The crew tried to pump out the water from the flooded compartments, but unfortunately the attempts were not successful and the ship began to sink. The 10,629gt/1993 built Taganrogskiy Zaliv and the 9,070gt/1990 built Frio Las Palmas responded to the distress signal and tried to assist the damaged freighter by taking her in tow, but the bad weather did not permit this. All 42 crew were safely evacuated to the cargo ship Taganrogskiy Zaliv without reported injuries. The Frio Las Palmas remained at the scene of the drifting casualty as she became partially submerged.