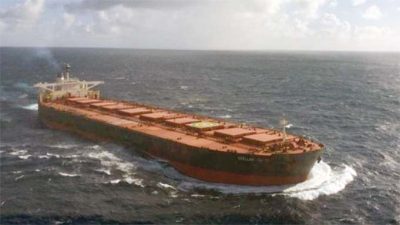 The 148,431gt/1993 built bulk carrier Stellar Daisy (above) sank in high seas on 31st March whilst laden with 260,000 tonnes on iron ore en-route between Brazil and China. The vessel was 2,000 miles off Uruguay when the ship seemingly developed a hull crack and water ingress causing her to split up and sink. Polaris Shipping was the owner/operator and the cargo belonged to Vale. 22 of the 24 crew were lost with the speed of the sinking and the high loss of life mirroring casualties related to liquefaction of cargoes such as iron ore and nickel ore. With a high moisture content, iron ore has a propensity to liquefy during a voyage, which causes serious stability problems with a high possibility of capsizing. The Stellar Daisy was originally built as a single-hull VLCC at the Nagasaki Shipyard owned by Mitsubishi Heavy Industries and was converted to a VLOC at the Cosco (Zhoushan) Shipyard in China in 2009. According to the Korean Register, the ship had undergone an annual survey on 12th August 2016 but in February the China Port State Control authorities identified six serious deficiencies relating to watertight and weathertight doors, indicating potentially leaking hatches or doors. There may be other causes of course, such as loading issues or hull stresses, but the vessel was allowed to sail without any detentions following the aforementioned inspection.

4 crew died and two are unaccounted for after the 1,900gt/1979 built general cargo vessel Tinaztepe S. sank off the coast of Libya on 16th March. A search and rescue operation ensued with 7 crew rescued as of the following afternoon. The 96 TEU capacity ship capsized at Misrata anchorage in bad weather conditions including strong storms and high waves that led to water ingress. Batu Shipping’s Tinaztepe S. was on a return voyage to Libya from the Turkish port of Dardanelle and had 23 crewmembers aboard.

A major search was underway on 20th March for 2 people missing after a Russian tanker collided with a fishing vessel off the coast of Barcelona. The 4,979gt/2014 built tanker MID Volga 2 had just sailed from the port of Barcelona when she collided with the 25m long fishing boat El Fairell (based in Barcelona) approximately 3 nautical miles from the port, causing the fishing boat to sink. 2 other crewmembers of the El Fairell were rescued and taken to a hospital ashore.

Lifeboat crews took part in a major rescue operation in the early hours of 20th March the 80m coaster Lady Alida suffered complete engine failure. The Penlee Lifeboat and Sennen RNLI were called 3 miles south of Gwennap Head, in the parish of St. Levan. The 2,544gt/2016 built ship was laden with sand and bound for Waterford, Southern Ireland. She was towed south to safer waters at a speed of 1 knot in force 6 conditions before repairs were made.

9 seafarers were missing after their 3,074dwt/2010 built general cargo vessel Hai Thanh 26 BIDV sank some 44 nautical miles off the coast of Vung Tau, Vietnam on 28th March following a collision with another ship. 2 of the crewmembers were rescued from a life raft. 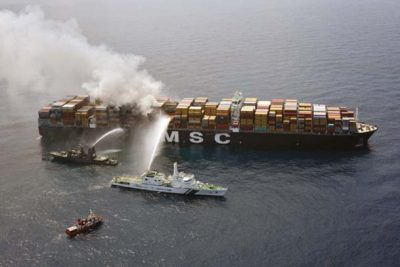 On 4th April the 151,599gt/2008 built MSC Daniela (above) caught fire in the Indian Ocean 120 nautical miles off Colombo port in Sri Lanka. The vessel was en-route from Singapore to the Suez Canal, when containers on the main deck aft caught fire. The crew tried to attack and extinguish the fire, but were unable to gain control. The ship changed course to Colombo and sent a distress signal to the local authorities requesting immediate assistance. The fire was extinguished during the morning of 5th April and the ship was towed to a distance of 10 nautical miles off Colombo for inspection once the vessel had cooled sufficiently.