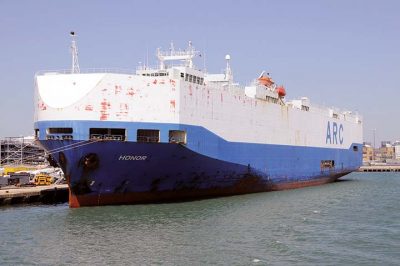 ARC’s U.S.A-flagged 49,814gt/1996 built car carrier Honor (above)suffered a fire in the English Channel in the early hours of 24th February whilst she was en-route to Baltimore from Southampton. The vessel’s fixed firefighting systems were used to tackle the fire and the cargo space was sealed. The ship’s crew monitored the cargo area and the vessel turned back towards Southampton, anchoring off the Isle of Wight. A Fire and Rescue Marine Response team was then airlifted on board the vessel by the Coastguard search and rescue helicopter based at Lee on Solent to further investigate the fire damage and determine whether or not it was safe for the vessel to return to Southampton. The crew of 21 were all safe and the Honor returned to Southampton that evening. Following inspection and repairs the Honor departed Southampton once again on 7th March.

Fiducia Rederi AB’s 1,300gt/1970 built self-loading bulk carrier Sternö ran aground on 24th February some 55km north of Gothenburg, Sweden. She began to take on water and listed. BMT Surveys was on the scene as well as mutual marine insurance company, Skuld. All shipping traffic on the Göta River was suspended until the vessel was moved. Salvagers later extracted 20cbm of diesel fuel from the ship to prevent pollution. The vessel is no stranger to incidents as she reportedly grounded twice in 2012 and hit the Kvicksund Bridge in 1998.

Julia Shipping’s 38,282gt/1989 built barge carrier Tide Carrier was at risk of going aground off Feistein Fyr, located to the south of Bergen, Norway, on 23rd February. At one point the vessel came to within 100m shore before tugs were able to connect a line to the ship. 5 non-essential personnel were airlifted off with 15 crewmembers remaining aboard along with two salvage personnel. The tugs successfully towed the ship clear and onwards to safety. 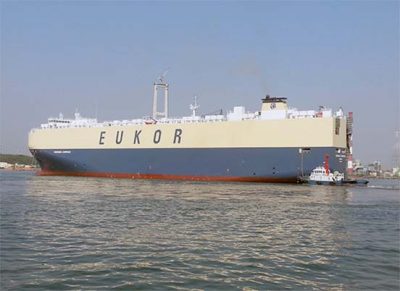 EUKOR’s 58,767gt/2013 built vehicle carrier Morning Compass (above) was seized on 18th February in eastern Libyan waters by local militants claiming that the vessel had entered a prohibited military area. The crew were unharmed and the ship was released four days later to continue her voyage to Germany.

Royal Dutch Shell’s 136,980gt/2009 built Q-Flex LNG tanker Al Khattiya suffered damages to her hull after colliding with an oil tanker off Fujairah in the United Arab Emirates. The vessel is one of the world’s largest LNG carriers and was struck by the 78,918gt/2000 built crude carrier Jag Laadki whilst anchored off Fujairah in the Gulf of Oman. The LNG ship sustained hull damage but was not breached. The Jag Laadki suffered considerable damage and both ships had to proceed to repair facilities.

Peter Doehle Schiffahrts-KG’s 17,188gt/2004 built containership Victoria was towed for repairs at the Danish Fayard ship repair facility after she suffered a 50m long and 20cm wide hull rupture on 10th February. The vessel was damaged when she ran aground near Kalundborg due to strong winds. At the time of the incident, the 178m Victoria was on her way from Antwerp to Fredericia.

A few days after this the 1,949gt/2006 built tanker Haci Telli (above), was seized at the Libyan port of Zuwarrah on 24th February following claims that the owner owes $430,000 from an oil purchase.

Transnave’s 3,079gt/2013 built and 88m long cargo ship Isla Bartolome (above) ran aground off the coast of Isla Puna, Ecuador on 25th February. The ship had departed from Guayaquil bound for the Galapagos Islands with 160 containers aboard when she struck a reef. The vessel sustained multiple hull breaches allowing uncontrolled water ingress causing the vessel to develop a strong list to starboard. The crew of the Isla Bartolome sent out a distress call before abandoning ship as they feared the cargo vessel would capsize. Authorities dispatched rescue boats and tugs to the scene. It was decided that the ship will be salvaged or scrapped and the incident impacted the citizens living on the Galapagos Islands as their supplies were aboard. Authorities subsequently airlifted supplies and perishable food to the island.

Shipping accidents from around the world