A salvage operation got underway to retrieve an abandoned bulk carrier, the 18,095gt/1999 built Antaios, from the Atlantic Ocean off the coast of South Africa on 4th December following a fire in her engine room. All 19 crew members had been evacuated from the ship and taken to Cape Town. The 170m long ship issued a distress call reporting a fire and flooding in her engine room while the vessel was underway some 860 nautical miles west of Cape Town. The call was picked up by the Japanese ore carrier Nsu Inspire, which was diverted to the scene and picked up the 19 crew members who had abandoned ship in life rafts. The Antaios was taken under tow to Cape Town.

However, South African officials prohibited the stricken bulk carrier, and her cargo of soya flour and corn, from coming within 30 miles of the coast until all fuel oil has been removed from the ship.

A small Iranian general cargo vessel was hit on 21st December by a rocket off the Yemen coast with seven Pakistani seafarers being killed. An eighth man, the Chief Officer, was able to swim to shore when the vessel exploded and sank. The 199gt/1990 built Jouya 8 was en route from Egypt to Dubai when she was attacked. Earlier that month at least six Pakistani sailors were killed when their ship was bombed by Saudi jets off the Mokha coast in the Yemeni province of Ta’izz. Growing fears of attacks in the area has seen the UK deploy Type 45 Destroyer HMS Daring off the coast of Yemen.

As Christmas approached, nine crew members were rescued from a grounded general cargo ship on the Greek Island of Andros. The 4,244gt/2007 built Cabrera ran aground on Christmas Eve in severe weather, leaving the ship partially submerged along the rocky coast in very heavy surf. All nine crew members were airlifted by a Greek Navy helicopter and transferred to local hospitals. The ship was sailing from Larymna, Greece, to Finland with 3,500 tons of ferronickel as cargo at the time of grounding. Some pollution and debris from the ship spread along the coast but Salvage Crews battled to pump as much fuel oil from the stricken ship as they could.

Glovis operated 55,680gt/1995 built car carrier Glovis Corona suffered a 15 degree list due to a cargo shift while she was sailing in inclement weather in the North Sea. At the time of the incident, which took place off the coast of Wangerooge Island on 26th December, the 21,421dwt vessel was on her way from Hamburg to Gothenburg, Sweden before continuing to the Middle East. The ship went to the Neue Weser Anchorage off Bremenhaven on 27th December to be dealt with thereafter.

The 26,681gt/2001 built and 1,662 TEU capacity container vessel Wan Hai 301 and the 43,071gt/2008 built and 4,250 TEU container vessel APL Denver collided on 3rd January off Pasir Gudang Port in Johor, Malaysia. One of the APL Denver’s bunker tanks sustained damage when the other ship’s bulbous bow punctured her hull. This resulted in approximately 300 tonnes of oil spillage. The Johor Port Authority deployed four anti-pollution craft and the ship’s owners were handed the bill for the clean-up operation.

On 10th January two capesize bulk carriers, the 91,407gt/2010 built Stella Cherise and the 93,196gt/2011 built Spartacus, collided in the East China Sea near Shanghai. The Spartacus suffered minor damage and anchored near Shanghai but the Stella Cherise’s hull was damaged and suffered water ingress. Tugs attended and the latter ship was stabilised and the crew was evacuated.

Also on 10th January, the 99,002gt/2008 built and 9,038 TEU containership Gustav Maersk ran aground as she was sailing through the Messina Strait off the coast of Torre Cavallo in southern Italy. The ship had been sailing from Rijeka in Croatia bound for Gioa Tauro in Italy when the grounding occurred and the cause was believed to involve the slowing of the ship to embark a Pilot. Three tugs attended and, after checks were made, the ship was refloated. 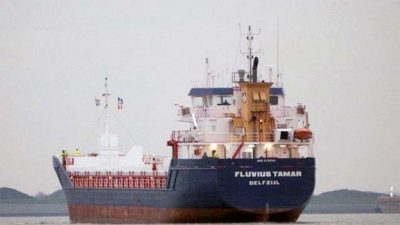 On Friday 13th January a 90m cargo ship sank 38 miles northeast of Ramsgate in force 9 conditions. The 2,876gt/2009 built Fluvius Tamar (above), formerly the Abis Albufeira, was the ship involved and her crew of 7 abandoned ship in a liferaft and were rescued by a nearby ship. The vessel lies at a depth of about 40m and was carrying 3,800 tonnes of Magnesium oxide and 80 cubic meters of diesel fuel. She had been enroute to Spain from The Netherlands. A reconnaissance flight early the next morning observed no pollution. Rescue helicopters from Lydd and Lee-on-Solent, Ramsgate’s all-weather Trent Class lifeboat, a Dutch search and rescue helicopter, and multiple merchant vessels assisted in the search and rescue effort.

Fleetmate Fluvius Otter (2,300gt/built 1996) had a minor incident that same evening upon departing Poole as reports suggest that she bumped Brownsea Pier and was escorted back to Poole Quay. This was apparently the result of avoiding action being taken when a craft strayed into her path. She departed for her intended destination of Ruisbroek in Belgium the next day.