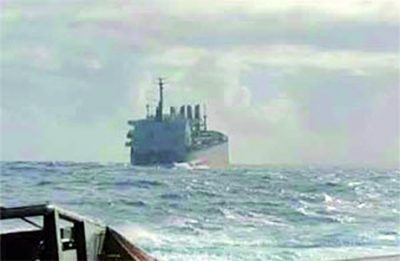 The Benita was refloated by Five Oceans Salvage on 24th July, over five weeks after the ship ran aground off Mahebourg, Mauritius. The ship was towed 20 miles off the coast where a skeleton crew assessed the ship following her grounding on 17th June after an apparent deliberate attack on the ship by one of her crew. A tow to the beaches of Alang was the vessel’s next destination, to be run aground again. However, in one final twist to this tale, the ship sank whilst under tow on 30th July in waters with a charted depth of 4,400 metres. The vessel sank by the stern having developed a severe stern trim, prompting the 2,070gt/1982 built tug Ionian Sea FOS to use the tow line quick release in anticipation of an imminent sinking.

The Dali, a 300m long and 94,730gt/111,032 dwt and 2015 built container ship’s stern struck the quayside at Antwerp as she was attempting to depart for Bremerhaven on 11th July. The ship sustained significant damage to several metres of hull and was detained for inspection.

The 174m long, 25,143gt/ 38,115dwt and 2014 built LPG Carrier Waasmunster collided with the fishing vessel Gros LouLou off Le Havre on 15th July. The LPG ship was loaded with 18,000 tons of butane gas when struck by the fishing vessel. The Waasmunster sustained hull damage below the waterline and suffered water ingress whilst the Gros LouLou sustained damage to her bow and sustained some water ingress. The salvage team was able to patch the hull of the Wassmunster a few hours after the collision.

Accidents and incidents around the world