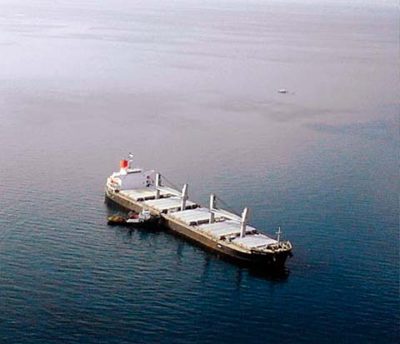 Bulk Carrier Belle Rose ran aground on 13th June on the Monad Shoal (above), a famous dive site known as one of the only places on earth where you can consistently spot thresher sharks in the wild. The reef sits on the edge of a steep 200m drop off and ranges in depth from 20m to 27m. The Philippine Coast Guard estimated that 483m of coral reef has been damaged as a result of the grounding of the 183m, 29,104gt/2011 built ship. The location of the grounding was approximately 4 nautical miles southeast of Malapascua Island in Daanbantayan, Cebu. The 50,472dwt ship was sailing from Nantong, China to Cebu when the incident occurred and was relfoated on 18th June after a two day operation, using three tugs, and then moved to an anchorage off the coast of San Fernand, Cebu under her own power. Local politicians and Greenpeace have demanded the Japanese owner of the vessel pay significant fines to help restore the damaged reef, which serves as a shark sanctuary. 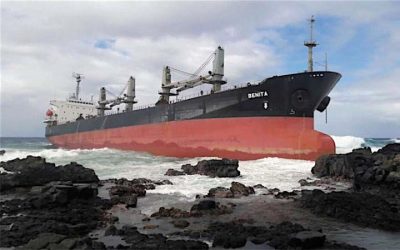 Bulk Carrier Benita ran aground on 17th June (above) after one of her crew members supposedly suffered a medical episode that led him to attack a fellow crew member and lock himself inside the engine room where he caused significant damage, resulting in the ship losing power. A number of cargo tanks were damaged and flooded when she ran heavily aground on the coast of Le Bouchon, Mauritius. The Greek salvage company Five Oceans Salvage, together with the vessel’s owners and the Mauritian authorities, then worked on removing the 145 tonnes of fuel oil on board the ship by pumping it from the fuel tanks to containers on the vessel that were then removed to shore by helicopter. The tug Ionian Sea FOS stood by in order to provide stability to the stranded vessel and afford control as needed. Refloating of the ship could take up to a month with a team of 25 welders, fitters and assistants working aboard in early July preparing the double bottom tanks and cargo holds for pressurisation for the refloating attempt. 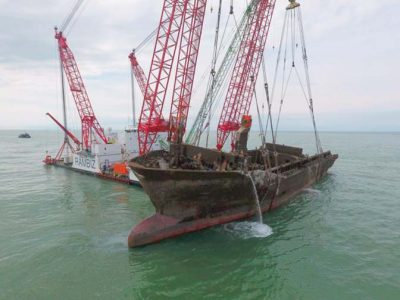 The Flinterstar (6,577gt/2002 built) sank in October 2015 off the coast of Zeebrugge after colliding with an LNG carrier. The bow section was raised from its resting place on 27th June after 10 weeks of preparation (above). Dutch shipping company Flinterstar III BV, the owner of the 9,000 dwt vessel, had signed a contract with a consortium of Belgian salvage companies headed by SCALDIS, a joint venture of DEME, Jan De Nul and Herbosch- Kiere, to remove the wreck. After the section was pumped out it was loaded onto a barge and taken to Ghent for recycling. The stern section will follow in August. 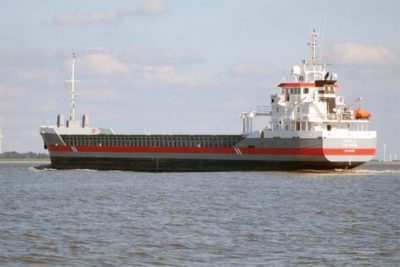 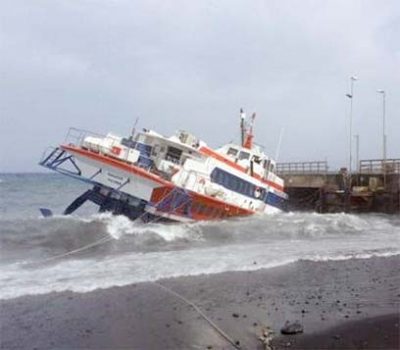 The 89 meter long, 3,150 dwt cargo vessel Hekla ran aground on the Kiel Canal near Sehestedt, Germany (above). The Hekla was headed to Bremen from Gdansk when it suffered a mechanical failure and drifted into the shallows. Traffic was halted on the canal until the Hekla was refloated by a tug. On 16th June, the 31 metre long, 21 dwt high-speed ferry Masaccio collided with a pier at Strombol (above). The Masaccio was approaching the pier when strong winds caused the vessel to slam against the pier damaging one of the starboard hydrofoils wings. The bow of the ferry swung under the pier and became wedged underneath causing the Masaccio to partially sink. The 117 passengers and six crew were able to evacuate the vessel assisted by local islanders.

Various incidents from around the world