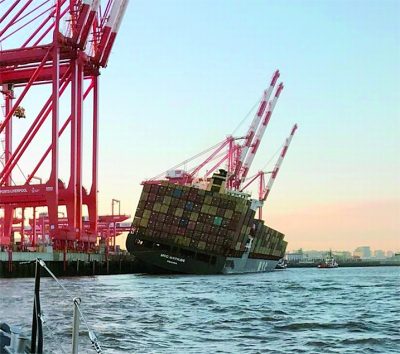 The 53,208gt/1999 built and 4,400 TEU capacity MSC Matilde (above) was reported as listing whilst at the Port of Liverpool in the early hours of 24th May. As a precaution, the captain and the crew of the 4,400 TEU boxship were disembarked from the vessel. The UK’s Maritime and Coastguard Agency sent lifeboats, tugs and a pollution response vessel to the scene after being contacted by port operator Peel Ports. Following a ballast transfer procedure, the ship returned to an even keel and the crew were all back on board several hours later. Authorities launched an investigation into the cause of the incident but the ship had also been the centre of an unrelated incident earlier in May when she suffered a main engine failure off Grondines, Quebec, on the St. Lawrence River. After the crew carried out repairs, the Post-Panamax ship resumed her voyage the same day. Additionally, in March 2019, the vessel experienced another technical failure resulting in the partial loss of power on the St. Lawrence River, limping to Montreal, Canada, for repairs.

The 51,714gt/1998 built Grimaldi Group operated car carrier Grande Europa caught fire off the island of Mallorca, Spain, on 15th May. The situation was brought under control by three fire fighting ships. The Grande Europa was en route from the Italian Port of Salerno to Valencia, Spain, at the time of the fire outbreak and is the second fire-related incident involving Grimaldi Lines’ vessels this year after the Con-Ro vessel Grande America sank in the Bay of Biscay on 12th March. The cause of the Grande Europa’s fire was not known at the time of writing.

Hamburg Süd is strengthening its product portfolio on the Europe-Central America, Caribbean and South America West Coast trade via a new stand-alone service offered in collaboration with Maersk Line. Announced on 17th May under the title SAWC1. The service will provide fast direct connections between the Chilean ports of San Vicente and San Antonio and Northern Europe using eight 4,500 TEU capacity ships, each with 1,400 Reefer plugs. In addition, Hamburg Süd will continue to have access to the existing Eurosal service (SAWC2), providing coverage for ports in Colombia and the Dominican Republic, while also maintaining a direct connection to/from the French port of Le Havre. 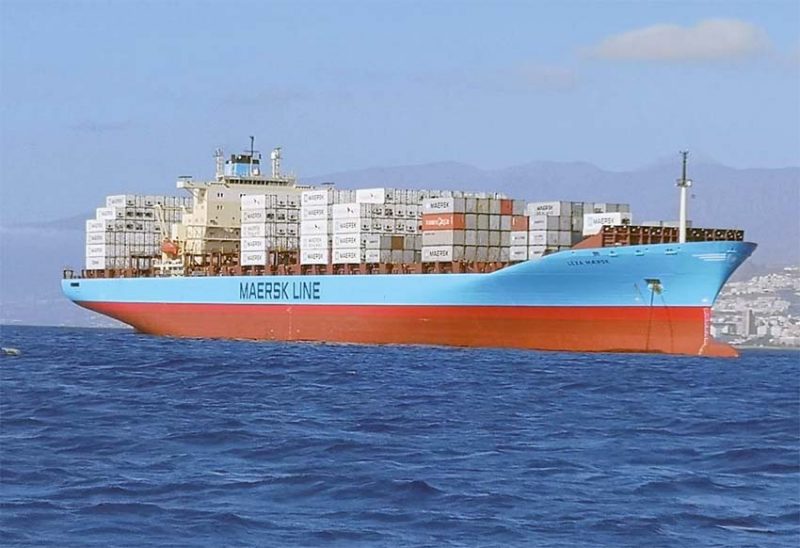 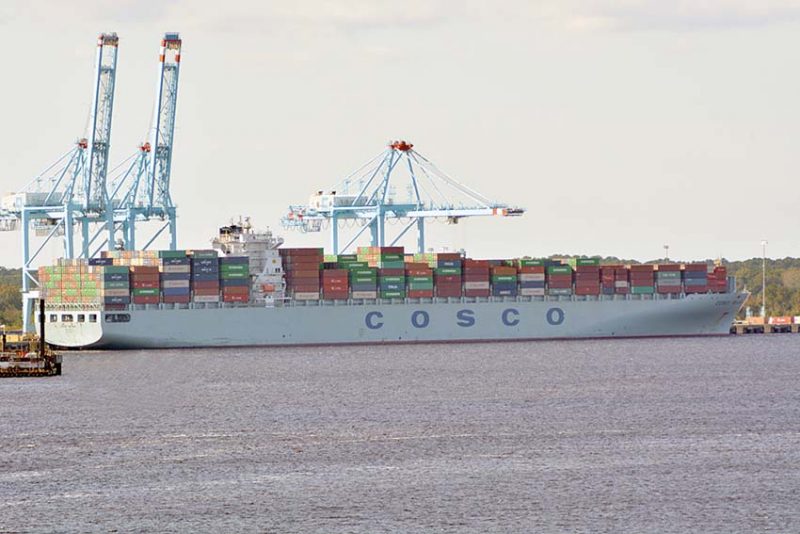 OOCL announced on 14th May that two new services, namely the Transpacific Latin Atlantic 2 (TLA2) and Transpacific Latin Caribbean 1 (TLC1), would commence in June 2019. The new services provide customers with competitive and reliable services from Asia to South America East Coast and the Caribbean with direct calls to strategic ports. The port rotation for Transpacific Latin Atlantic 2 (TLA2) is Qingdao-Shanghai-Ningbo-Shekou-Singapore-Sepetiba-Santos- Paranagua-Itapoa-Navegantes-Itajai-Santos-Singapore-Hong Kong-Qingdao whilst the Transpacific Latin Caribbean 1 (TLC1) route serves Singapore-Shekou-Hong Kong-Kaohsiung-Ningbo-Shanghai-Qingdao-Pusan-Manzanillo-Balboa-Manzanillo, PA-Cartagena-Kingston-Caucedo-Singapore. The TLA2 commenced using the COSCO New York from Qingdao on 27th June with the TLC1 commencing with the COSCO Beijing (above) from Singapore on 30th May but the Jamaica and Dominican Republic calls were phased in over the following 8 weeks.

HMM, the South Korean shipping company formerly known as Hyundai Merchant Marine, unveiled a rebrand in the second half of May. The new logo (above) is meant to represent the bow of a huge ship with the blue HMM letters in the new logo being the embodiment of the shape of the front of a large ship crossing the ocean, and the red line on top representing the rising sun on the horizon where the ship is sailing. The rebrand was unveiled in Seoul by president Jae-Hoon Bae.

Star Bulk Carriers Corp. has announced that it has entered into an agreement with a subsidiary of Delphin Shipping LLC to acquire eleven operating dry bulk vessels in June 2019 for an aggregate purchase price of $139.5 million. The Company has also secured scrubber systems for all of the vessels with attractive delivery dates. The vessels in question are the 35,517gt/2014 built Apus, the 32,987gt/2012 built Aquila, Cepheus, Columba, Centaurus, Dorado, Hercules and the 32,987gt/2013 built Hydrus, Leo, Pegasus and Pyxis.

Viking Ocean Cruises has had a Class Action lawsuit filed against it via Maritime lawyers at Lipcon, Margulies, Alsina & Winkleman regarding the Viking Sky off the Norwegian coast incident in March 2019. The law firm said that the lawsuit involves the company’s “knowing and intentional decision to sail the 47,842gt/2017 built Viking Sky into notoriously perilous waters and directly into the path of a massive weather event known as a Bomb Cyclone.” In the midst of the storm, the vessel’s engines suffered a complete failure leaving her adrift in Hustadvika, off the coast of Norway on 23rd March. 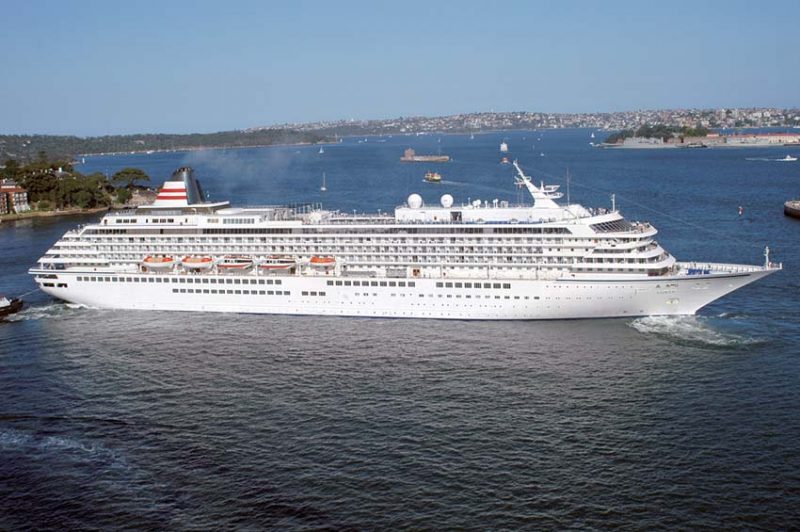 NYK Cruises’ 50,142gt/1990 built Asuka II (above) is scheduled to undergo a 45 day makeover at the Sembcorp Marine Admiralty Yard in Singapore from the middle of January 2020. The largest cruise ship flying the Japanese flag will be fitted with an exhaust scrubber during the dry docking, which will also include general refurbishing and upgrades. The NYK Group said it would continue its efforts with improving the Asuka Cruises, which operates the 872 passenger capacity Asuka II. The ship will continue offering cruise experiences emphasising traditional hospitality, known as “omotenashi” in Japan.

Seabourn announced details on 22nd May of the itineraries for the first ultra luxury purpose built expedition ship, the Seabourn Venture, launching in 2021. Between July 2021 and April 2022, the ship will visit breathtaking and remote destinations in the Arctic and Antarctica, as well as the Amazon, Caribbean, Central and South America and more. On 30th April 2022 the Seabourn Venture will return to Europe with a 12 day Western European Waterways cruise from Praia, Ilha de Santiago, Cape Verde, to Greenwich, calling at destinations in the Canary Islands, Morocco, Portugal, France and Belgium. The Seabourn Venture is scheduled to make her debut in June 2021, with a second yet-to-be-named sister ship expected to launch in May 2022. 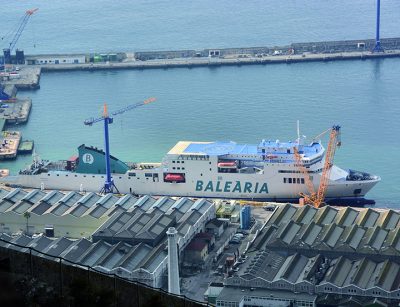 Baleària‘s 23,975gt/2002 built Napoles (above) completed a major refit on 10th May at Gibraltar’s Gibdock that included converting the vessel to LNG fuel. The three-month conversion project was one of the largest ever undertaken by the shipyard, located on the Mediterranean side of the Strait of Gibraltar. The 186m long Napoles, which has capacity for 1,600 passengers and 1,430 lane metres of freight, is the first of five ships that Baleària plans to convert to dual fuel operations to comply with IMO’s 2020 sulphur cap regulations. Gibdock has already secured a contract to convert a second vessel, the 24,409gt/2002 built Sicilia, which is due to arrive at the yard later this year.

Grimaldi Line’s 56,738gt/2003 built Grande Amburgo ran aground on the Western Scheldt bank at Walsoorden on 26th May whilst inward to Antwerp from Dakar, Senegal. She managed to float free after around an hour without damage. 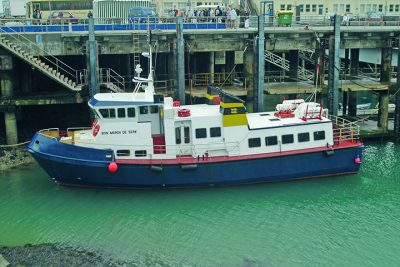 Sark Shipping’s 187gt/1983 built Bon Marin de Serk (above) returned to Guernsey on 22nd May after a prolonged 5 year major refit at Saxon Wharf on the River Itchen, Southampton. Her propeller shafts were found to be worn according to the local media reports, and the sourcing and fitting of replacements caused the delays in returning the vessel to service.

For much more see our August 2019 issue.