K-Line of Japan, the country’s third-largest shipping company, is reportedly planning to halve the fleet of its smaller bulk ships. Kawasaki Kisen, which owns around 100 Panamax and handymax sized ships, plans to make the reduction by returning vessels to shipowners. The company reported a preliminary net loss of $457m for the year ended March 2016, partly because of impairment losses on dry bulk ships. K Line operates 375 bulk carriers, 70 container vessels and 49 ships to ship oil and gas, according to its website.

Noryards BMV, a sister company of Norway based Noryards AS, has filed for bankruptcy having failed to reach a compulsory debt settlement with its creditors. Rickmers Holding AG and E.R. Capital Holding GmbH & Cie. KG are reviewing a potential merger of their ship management units, Rickmers Maritime Services and E.R. Schiffahrts, into a global joint venture. The companies have signed a declaration of intent to create a new company that would manage around 220 vessels. Based on the current assessment, the merger would not require modifications to be made to the forecast for financial year 2016. 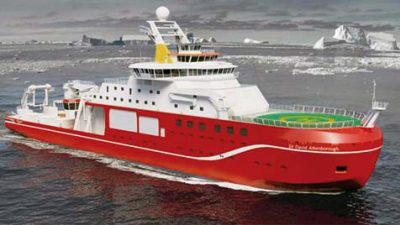 The Polar Research ship (above) that looked destined to be christened “Boaty McBoatface” after a public naming competition got wildly out of hand is to be named RRS Sir David Attenborough, despite the “Boaty” title previously topping a vote. Days before Sir David turned 90, it was announced on 6th May that the £200m vessel will be named after the world-renowned naturalist and broadcaster. 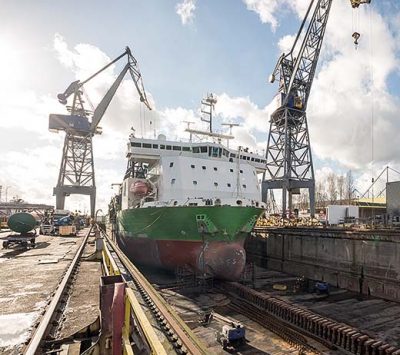 Damen Shiprepair Amsterdam completed a maintenance programme for fallpipe vessel Flintstone (above) in April. The 21,401gt/2011 built ship underwent a six-week programme of maintenance and repairs together with her first Special Survey. Owned and operated by the Tideway group of companies, a division of the Belgian dredging, environmental and marine engineering group DEME, the 155- metre, DP2 Flintstone is the flagship of the Tideway fleet. Her equipment includes an active heave compensated ROV with state-of-the-art survey equipment and a 200 kW mass flow excavation tool for the removal of seabed materials.

Hyundai Mipo Dockyard has agreed to delay the delivery of a total of six pure & car truck carriers (PCTCs). At the request of the (undisclosed) owners of the new vessels, the first delay saw two in a series of four ships, ordered in September 2015, postponed. The vessels, signed under a $324.8 million deal with an Asian owner, were scheduled for delivery by the end of June, 2019. The new delivery date has not yet been set for the two car carriers. The second delay was agreed between a Marshall Islands-registered company and the shipbuilder for a series of four PCTCs, also ordered in September 2015 through a $304 million agreement. The car carriers are now scheduled to join their owner by the end of February 2020 instead of 2018.

Mitsui O.S.K. Lines (MOL) revealed in April that it is introducing a Flexie bow design with a rounded bow on its new vehicle carriers to reduce wind resistance and cut emissions. Four such ships are on order from Usuki City-headquartered Minaminippon Ship-building Co. with delivery due for 2017 and 2018. The bow form was developed through a joint research project by MOL, MOL Techno- Trade, and Akishima Laboratories (Mitsui Zosen). The four 14-deck newbuilds will be 199.95m long with a 32.2m beam, and have capacity for 6,800 standard cars