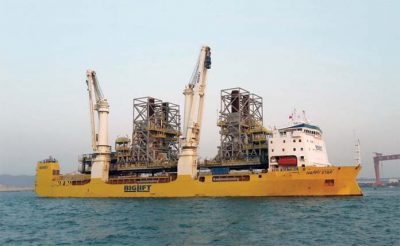 BigLift ordered a third 1,800 tonne capacity Heavy Lift Vessel at the end of June, namely a further Happy S-type vessel identical to BigLift’s flagship Happy Star (above) featuring two 900mt Huisman Heavy Lift Mast Cranes. With high crane pedestals and lengthened jib, the newbuild will have a lifting height only matched by Happy Star in the worldwide fleet of heavy lift vessels. The new ship will be named Happy Sun and will be built by Ouhua Shipbuilding in Zhoushan, China. Delivery is expected in the first quarter of 2018. The Happy Sun will be 156m long and will have a 29m deck and a 18,374dwt. The length and the forward position of the superstructure will offer a single, large cargo hold and a wide, open deck area. The vessel will also be fitted with pontoon type hatch covers and a large poop deck which will leave the full deck area available for cargo stowage. The Happy Sun’s ‘tween deck will be adjustable in height and BigLift says the ship will be allowed to sail with open weather deck hatches at a draught of up to 7.50m. The vessel will also have Finnish/Swedish 1A Ice Class notation, and a service speed of 15 knots. Upon delivery of the Happy Sun, BigLift’s fleet will comprise 16 state-of-the art heavy lift vessels with lifting capacities up to 1,800mt.

China Cosco Shipping Group and the Hellenic Republic Asset Development Fund signed a confirmation letter in early July for the sale of a majority stake in Piraeus Port Authority to the Chinese conglomerate. The letter, signed on 4th July in Beijing, confirmed that all terms in the April agreement regarding CCSG’s purchase of a majority ownership stake in Greece’s largest port have been approved by the two parties. The signing was witnessed by Chinese premier Li Keqiang and his counterpart Greek Prime Minister Alexis Tsipras. In April, Greece agreed to sell a 67% stake in PPA for €368.5 million to the Chinese shipping company, created by the merger of Cosco Group and China Shipping Group earlier in 2016. Under the deal, CCSG will firstly acquire the 51% stake for €280.5 million and then the remaining 16% for €88 million after five years and, once it completes, will invest €350 million over the next decade. The Cosco Group has already been investing in the port’s container terminal since 2009, after winning a 35-year concession to operate the facility. Total container throughput in the port has increased to 3.36 million TEU in 2015 from 880,000 TEU in 2010. CCSG said its investment has also increased the Greek government’s financial income, with 1,200 local jobs being created during the period.