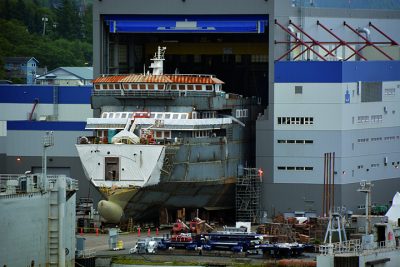 Alaska Marine Highway System’s newbuild, the Tazlina (being built above), was launched mid-May is now being fitted out. A sister vessel is expected to arrive in the spring of 2019.

ANEK Lines’ 31,804gt/1991 built Asterion II (formerly the Japanese vessel Grand Spring) was due to replace the Asterion on the Patras-Venice sailings from 21st June following refit at Perama. However, her debut was delayed by a week.

Bay Ferries’ The Cat entered service for the 2018 season between Yarmouth, Nova Scotia, and Portland, Maine, on 8th June. There are 108 daily round trips scheduled for this season, which runs to 8th October. 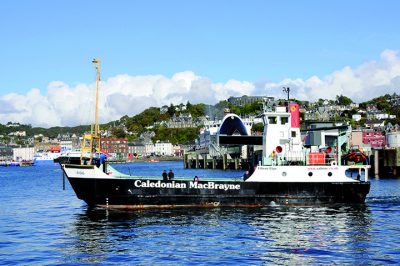 Clare Island Ferry Co. welcomed their latest vessel, the 69gt/1975 built former CalMac ferry Eigg (above), to Clare Island on 30th June. The Island Class vessel joins former fleet mate Clew Bay Queen. The latter was built in 1972 as CalMac’s Kilbrannan and went to Arranmore, County Donegal, in 1992 as the Arainn Mhor before moving onto Clare Island in 2008. The Eigg differs from her sister by being slightly longer and received an elevation to her bridge deck to permit the carriage of an HGV.

CLdN will expand their Ro-Ro network from mid-September with a new direct shortsea shipping service to Santander in Northern Spain from Zeebrugge with two calls per week. The rotation of the new service will be the following: Zeebrugge-Santander-Zeebrugge-Purfleet-Zeebrugge. With this new service CLdN will not only be able to offer the Santander to Zeebrugge service but also offer customers the choice of onward travel on other CLdN to the U.K, Sweden, Denmark and Ireland. 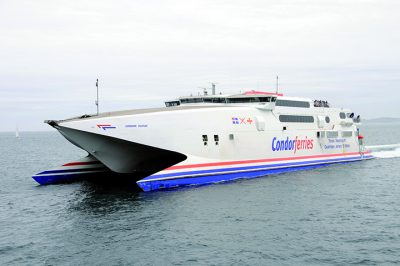 Condor Ferries’ 5,007gt/1997 Condor Rapide (above) suffered a cracked waterjet in June and was sent to the synchrolift at Cherbourg for repairs. SMS, a Southampton based ship repairer and marine engineering services provider, completed this, the company’s first ever major high speed craft (HSC) refit in France on 22nd June. The work took a week and the Incat built vessel required repairs to her Wartsila waterjet propulsion system on the port outer main engine, minor structural repairs and planned electrical upgrades. The Condor Liberation covered both the Poole and St. Malo schedules in the absence of the Condor Rapide with the latter returning to service on 23rd June. A day later the 11,166gt/1996 built Commodore Goodwill went to A&P Falmouth for dry docking. The 14,000gt/1999 built Commodore Clipper took over the overnight sailings from Portsmouth that same day with the chartered 7,606gt/1998 built Arrow covering to ‘Clipper’s normal rota.

DFDS announced on 13th June that it has ordered an additional Ro-Ro newbuilding for delivery in the first half of 2020 from the Jinling Shipyard in China. The newbuilding is similar to the four previously ordered ships and  offers the same 6,700 lanemetre/450 trailer freight capacity. DFDS’ fleet renewal programme also includes two Ro-Pax ferries to be delivered in 2021 for deployment in the Baltic route network. In addition, one chartered Ro-Pax (from Stena RoRo’s E-Flexer fleet) will be delivered in 2021 for deployment on the Dover-Calais route, replacing the Calais Seaways. DFDS has also entered into an agreement with Ukrainian operator Ukrferry to sell two combined freight and passenger ferries, the 25,606gt/1989 built Kaunas Seaways and the 22,341gt/1987 built Vilnius Seaways. Delivery of the ferries was scheduled for July 2018. The ferries have been on time charter to Ukrferry for several years and deployed on routes in the Black Sea. The sale will affect the employment of around 70 crew members who DFDS will seek to employ on it’s own route network to the greatest possible extent. The sale of the ferries is expected to entail a profit of around DKK 20 million. UKrferry already owns the 24,084gt/1988 built sister vessel Greifswald, which was arrested in April following deficiencies.