Baleària and Peregar began a new joint service between Melilla and Málaga on 18th July under the operating name Compañía Marítima Alborán (CMA). There are six Ro-Pax round trips a week plus one weekly Ro-Ro service. CMA will also operate services Malaga-Ceuta/Tangier Med with Ceuta served twice weekly for freight and Tangier Med by Ro-Ro only Mon-Fri and Ro-Pax at weekends. The company is employing the 19,308gt/1992 built and 430 car capacity Ro-Pax Denia Ciutat Creativa and the 6,419gt/1979 built and 1,000 lanemetre capacity Festivo. The Spanish ferry operator is to also invest €60 million in switching to LNG engines in five of its ferries over the next two years. This project is an addition to the two ‘smart ships’ being built in Italy that will be LNG powered. The ferries concerned are the 24,409gt/2002 built sisters Nápoles and Sicilia plus the 29,670gt/2010 built Abel Matutes (above), 20,238gt/2009 built Bahama Mama and the 24,760gt/2008 built Martin i Soler. The first of the ships in the fleet to be adapted for LNG power will be the Nápoles during her scheduled winter overhaul.

Color Line is to purchase the 12,433gt/1998 built Ro-Ro vessel Finncarrier and deploy her on the Oslo-Kiel route from January 2019. A freight only sailing is a new business offering from Color Line. The ship currently operates for Finnlines on the Hull-Helsinki service.

Condor Ferries’ Commodore Goodwill returned to Portsmouth on 27th July fresh from overhaul at A&P Falmouth and with a new steering system installed to enhance manoeuvrability. She also has a new funnel profile. Gone is the unsightly extended funnel to accommodate exhaust scrubbers in favour of her original funnel size. The process to install scrubbers has seemingly been abandoned for the time being. The chartered 7,606gt/1998 built Arrow had operated to the Channel Isles in her absence. Meanwhile the 325gt/2006 built monohull fast ferry Granville of Manche Iles Express was off service for part of July and August, returning to service on 12th August after awaiting parts following a breakdown. During this time the company could not serve Sark, Alderney, Dielette and Carteret. Two substitute sailings to Sark via Guernsey were organised for 5th/8th August.

DFDS had to suspend crossings between Newhaven and Dieppe on 8th/9th July and cancelled the first service on 10th July. The reason was a problem with the ramp in Newhaven. The ship that arrived at Newhaven when the fault arose was forced to return to Dieppe. 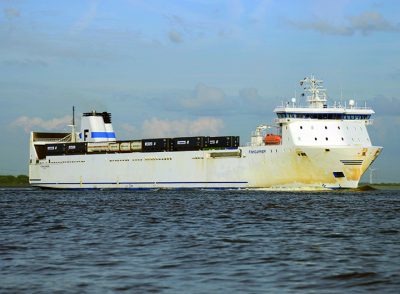 Fjord1’s second of the two all-electric/plug-in ferries built by the Turkish Tersan shipyard arrived in Norway during July under tow. Built to a Multi Maritime design, the 3,618gt and 112.5m long Horgefjord has capacity for 399 passengers and 120 cars. The newbuild is slightly shorter than her 122.1m/3,853gt sister vessel Mokstrafjord, delivered earlier in 2018 and also operating on the Krokeide-Hufthamar route.