Africa Morocco Link (AML) ferries, and also Intershipping, appeared to be on the brink of insolvency at the time of writing in early January. The company operates the 16,071gt/1980 built former Scandline ferry Morocco Star (above) on the Tanger Med-Algeciras service. 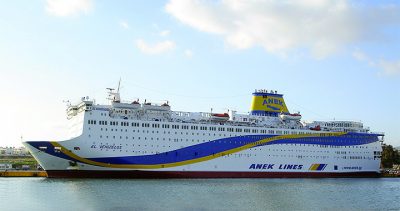 ANEK Lines has, according to the Russian and Greek media, reached an agreement with Russian cruise company Smolny (Petroupoli) to form a large passenger transport company, which initially will operate in the Baltic Sea. Two more companies are expected to participate, namely the Litinus Group and Prime. The Russian company will hold a 51% share and ANEK lines will most likely contribute their 38,261gt/1992 built cruise ferry El. Venizelos (above) with a start date as early as April 2019 if the plans comes to fruition.

CalMac’s 3,040gt/1985 built Hebridean Isles (above) departed the Garvel Dry Dock on 9th December following a prolonged refit and headed back to Port Ellen following trials the next day. The Scottish Government has dropped the tender process for the Gourock-Dunoon service and awarded it to CalMac.