Acciona Trasmediterranea’s new vessel will take the name Villa de Teror. The ship started life as the Viking Line Viking ADAC (a sister for the 35,918gt/2008 built Viking XPRS) but was abandoned when only partly built. Delivery is now expected in June when originally scheduled for April. The vessel is at the Vulcan Shipyard in Vigo and her name comes from the town of Teror, a municipality in the province of Las Palmas. 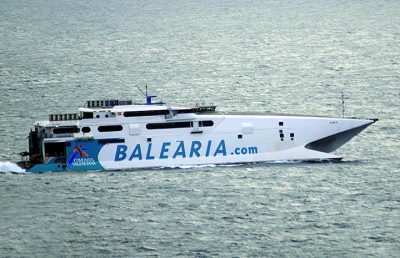 Baleària is employing the 4,112gt/1996 built Jaume II (above) this summer to connect Majorca (Alcudia) and Menorca (Ciutadella) with Barcelona.

Bay Ferries’ The Cat will resume service between Portland, Maine and Yarmouth, Nova Scotia in June 2018 after the company and the Government of Nova Scotia agreed to pay for upgrades to the ferry terminal in Portland to meet US Customs & Border Protection Agency demands.

Brittany Ferries’ new 27,414gt/2007 built Connemara arrived at Santander on 23rd April for her refit and to receive her Brittany Ferries branding on a white livery. She completed her maiden voyage overnight from Cork on 8th May but was diverted from Roscoff, to Brest to avoid a Union protest at the original destination.

CalMac’s new Brodick Ferry Terminal was officially opened by Cabinet Secretary for Finance and the Constitution Derek Mackay on 12th April following a £30 million infrastructure upgrade project undertaken by CMAL, which has transformed the harbour area. The project has created a flagship harbour for the Isle of Arran and provides 21st century facilities that will boost the local economy.