BC Ferries issued a Request for Expressions of Interest (RFEOI) on 5th October for the procurement of five new major vessels. The competitive bidding process is open to local, national and international shipyards, including consortiums, and BC Ferries is encouraging local and national companies to bid on these projects. The new ships will replace the Queen of Alberni, Queen of New Westminster, Queen of Cowichan, and Queen of Coquitlam, and will introduce an additional vessel to the fleet to address forecasted increases in vehicle and passenger traffic in the coming years. 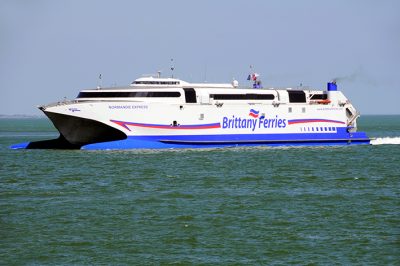 Brittany Ferries’ 6,581gt/2000 built Normandie Express (above) concluded her season with a bad weather cancellation having operated extra days as cover for the 35,586gt/2002 built Mont St. Michel as the latter needed an emergency dry docking in Brest. She proceeded to Cherbourg and then went on to the sycrolift for annual overhaul week beginning 24th September. The Mont St. Michel was in trouble again on 7th October when she suffered an electrical fire and remained alongside at Ouistreham. The 27,541gt/1992 built Normandie was diverted to Cherbourg daily until 11th October when services returned to normal.