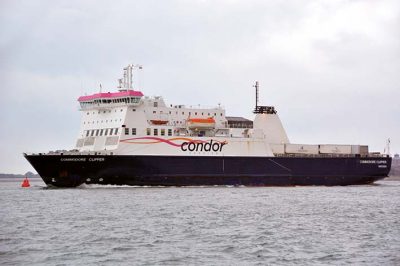 Dredging work in and around Portsmouth Harbour in preparation for the new 65,000gt aircraft carriers has thrown up a few surprises in the form of unexploded ordnance. The most disruptive occasion to date was on 16th November when an unexploded WWII 500lb bomb was discovered in the harbour. The timing of the find prevented the early morning arrivals of the Commodore Clipper, Normandie, Bretagne and Cap Finistere from accessing the Continental Ferry Port. All waited in the eastern Solent until late morning when their passage to the port was cleared. At this point the Isle of Wight and Gosport Ferry services were unaffected. However, the harbour was then completely closed to all services and Gunwharf Quays was evacuated among other areas just after midday. The ordnance was then towed out into the eastern Solent and to 1.5 miles off the Island where a controlled explosion took place. The outward sailing of the Commodore Clipper (above) was cancelled due to the disruption. Wightlink Ferry services recommenced from 1500 following the closure that came into force from 1209. Because of the closure, the 1147 Wightlink catamaran service from Ryde Pier Head to Portsmouth Harbour returned to Ryde with its customers. 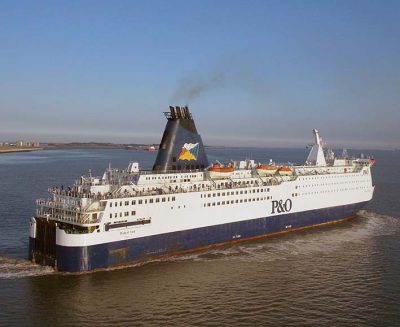 In a major boost for the service, P&O Ferries announced on 28th November that it will spend £8.5 million on upgrading the two ships on its Hull-Zeebrugge route in a move which guarantees the future of the Ro-Pax service into the next decade. The 31,785gt/1987 built Pride of York (above) and the 31,598gt/1987 built Pride of Bruges, each with a capacity of 880 passengers on their overnight sailings to and from the continent, will benefit from the major investment in their physical infrastructure and passenger areas. The objective is to provide first class dining, drinking and shopping areas for freight customers and tourist passengers to enjoy during the 12 hour voyage. The upgrade refits will be undertaken by the Remontowa shipyard in Poland. In the cabins, upgrades will include the lighting, bedding and en-suite bathrooms in addition to installing enhanced temperature control and ventilation so that passengers have a comfortable night’s sleep. The premium Club class cabins will benefit from a complete refurbishment, including new carpets, curtains and furniture. The Kitchen dining area, which hosts an all-you-can-eat buffet, will be given an informal, family friendly feel whilst the Brasserie will be refurbished to provide a premium dining experience at affordable prices. The onboard retail areas will also receive a revamp. P&O Ferries formally opened its expanded terminal at Zeebrugge on 16th November which doubles capacity so that the ferry and logistics company can meet rising demand from continental exporters to Britain. From its Zeebrugge hub, P&O Ferries operates services across the North Sea to Tilbury, Hull and Teesport respectively. It also operates incoming rail services to the Belgian port from Central and Eastern Europe. The terminal has now been enlarged by 14 hectares, comprising a fourth berth and significantly enhanced rail infrastructure. P&O will have the capacity to conclude new partnerships such as the existing one with Swedish Orient Line, which links the Zeebrugge hub to Gothenburg, and by extension Gothenburg with the east coast of Britain. P&O Ferries this year celebrated the 50th anniversary of its operations in the Belgian port.