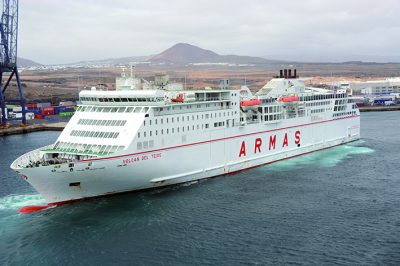 Fred. Olsen Express and Baleària have joined forces to link the Spanish mainland and Canary Islands with a ferry service by the end of the year. The two companies will initially run three weekly services for passengers and freight between the port of Cadiz or Huelva and the Canary Islands under the Canary Bridge Seaways (CBS) project, from mid-November 2018. Seatruck’s Clipper Pennant is one of the two vessels chartered for the new venture. Following the sale of Trasmediterránea to ARMAS the latter had operational limits imposed upon it by CNMC (National Commission of Markets and Competition). The CBS Project takes advantage of these limits but FRS has a had start as they opened a Huelva-Canary Isles service on 7th July using the 29,514gt/2011 built ARMAS ship Volcan del Teide (above). Baleària has recently received a grant of €11.8 million from the European Commission to retrofit five of its ferries to run on LNG. The funding represents 20% of the total sum of €59 million needed for the project. The project is entitled LNGHIVE2 and will be implemented from late 2018 to 2021 and involves the ferries Nápoles, Abel Matutes, Sicilia, Bahama Mama and Martín i Soler. 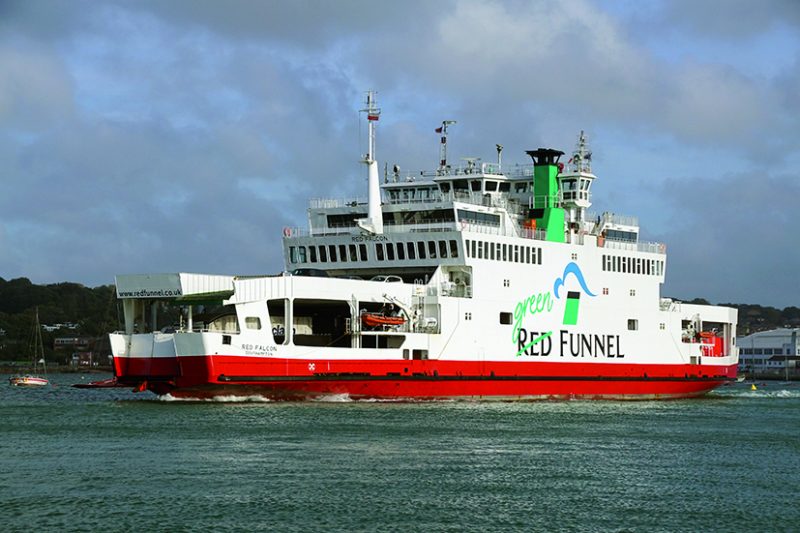 On 17th September Red Funnel Ferries announced a long-term environmental strategy under the heading Red Goes Green. This strategy seeks to showcase the environmental successes of recent years and highlight a wide range of new green initiatives, including measures to change consumer behaviour in line with the company’s commitment to operate in an environmentally sustainable and sympathetic manner. The 4,128gt/1994 built Raptor Class vehicle ferry Red Falcon (above) is being used for this purpose. To raise public awareness, the ship has been rebranded with a green funnel and logo. A series of mishaps beset the Red Funnel fleet starting with the 342gt/ 2003 built Red Jet 4 suffering a technical failure on approach to Cowes Harbour on 21st September. The vessel needed assistance to her berth and the service was then suspended as the catamaran could not move without tug assistance. On the morning of 27th September, the 4,075gt/1996 built Red Eagle came into contact with moored yachts at West Cowes after departing East Cowes in dense fog. The reason for the vessel’s deviation off course was unclear but an investigation was launched and the ship was withdrawn for the remainder of that day. Two days later the 4,128gt/1994 built Red Falcon was involved in a collision with a small motor vessel as she crossed the Solent between Calshot and Cowes at around 1640. The vessel was withdrawn from service for an investigation but there was no damage done to the ferry.

Then, on 21st October, the Red Falcon was in trouble again. On entering Cowes Harbour in fog the ferry collided with a number of yachts, sinking one before running aground.  Search and rescue lifeboats were launched after a member of the public called 999 reporting that he had heard cries for help within the harbour. The UK’s marine accident investigation branch (MAIB) is investigating the case and the captain and first mate of the vessel have been suspended from duty.