Originally, construction was scheduled to start in 2019 on a new Alaska ferry, but now contractors could begin building the new ship as early as 2017. The Alaska Department of Transportation wants to replace the 4,593gt/1964 built ferry Tustumena as soon as possible The vessel was one of the original four ships in the Alaska Marine Highway System fleet, and she has one of the longest routes of any state ferry, travelling between Homer, Kodiak and Unalaska, calling at 13 ports along the way. While the Tustumena is still safe to operate, the old girl is becoming very expensive and time consuming to maintain. In days gone by the ship was known as the Blue Canoe! Building the new ferry will cost around $240 million, but the state only has to cover 10% of this thanks to federal funding. The new Tustumena will look similar to the original ship, but she’ll be longer so as to boost capacity and provide enhanced comfort during inclement weather.

Rederij Doeksen Newbuild Technology Heinen & Hopman of Singapore has secured a contract with Strategic Marine to deliver the complete heating, ventilation & air conditioning (HVAC) system for two 70m Aluminium RoPax ferries for Dutch ship owner Rederij Doeksen. Strategic Marine is an Australian based shipbuilding company with shipyards in Australia, Singapore and Vietnam. Both new vessels will be deployed on services in the Wadden Sea between Harlingen and the islands of Terschelling and Vlieland. 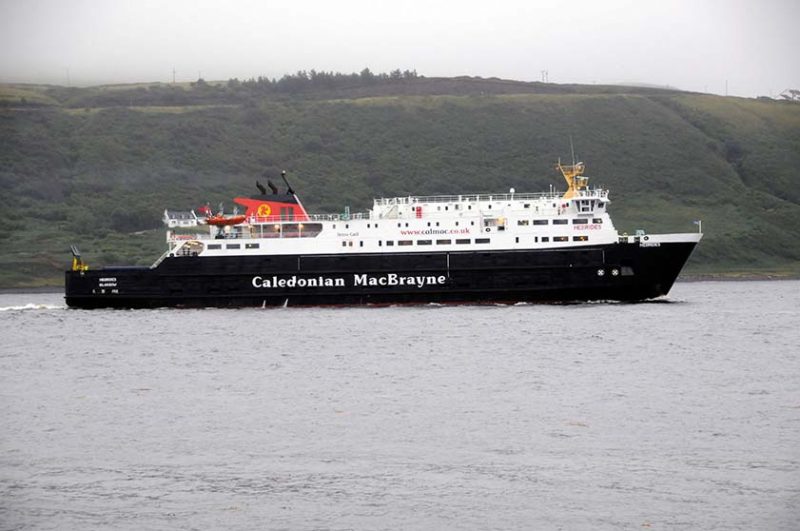 On the morning of 25th September CalMac’s 5,506gt/2001 passenger and vehicle ferry Hebrides (above) experienced a technical failure that rendered the vessel unable to reduce speed sufficiently for the routine docking procedures and she subsequently struck the seabed and then two pontoons in Lochmaddy harbour when freeing herself. The vessel had been approaching the North Uist port from Tarbert on Harris with 76 passengers and crew aboard and the incident took place at 11.05am. No-one was injured and the vessel’s hull remained intact. A total of 76 passengers and crew were on board, as well as 13 cars, one lorry and one motorhome. The ship was later safely moored at the Lochmaddy terminal and all passengers and vehicles were disembarked. Services were cancelled for the remainder of the day whilst a team of divers awaited to carry out underwater investigations of the hull, and a full inquiry into what happened was launched. The Hebrides sailed to Greenock for dry docking where she arrived on 1st October and entered the Garvel Dock. She had arrived on one engine as a mooring chain from one of the pontoons that she struck was wrapped around the starboard propeller shaft. Leaving the dry dock the morning that she arrived was the TS Queen Mary, looking resplendent in a fresh coat of paint, a far cry from the condition that she left Tilbury in.

In September, DFDS celebrated the latest cohort of apprentices to complete its apprenticeship scheme, with a 100% pass rate. A ‘passing out’ ceremony took place on board the 35,923gt/2006 built Dover Seaways and was attended by family, friends and industry representatives. The event saw the company’s first engineering apprentices and the second group of deck apprentices qualify since the programme started in 2012. The ceremony was the first of its kind, in an industry which has seen a decline in new ratings entering, particularly among the younger generation, with statistics showing that more than 70% of ratings currently employed in the UK maritime sector are aged 40 or over. The number of UK seafarer ratings was 30,000 in the 1980s but currently stands at less than 9,000.

DFDS offers two apprenticeship schemes: the Deck Scheme which sees students qualify as Able Seafarers, working in the deck department as a watchman and assisting with loading and unloading the ship, and the Engine Scheme which sees apprentices work towards becoming Marine Fitters within the engineering team, which is responsible for maintaining and repairing the ships. The apprenticeships are offered in partnership with the Merchant Navy Training Board (MNTB), the shipping industry’s central body for promoting and developing sector- specific education and training skills. The schemes last between 18 and 24 months and are aimed at 17 to 24 year olds with a minimum of Grade C Maths and English at GCSE level. From September, DFDS saw nine new apprentices start their journey to become qualified Seafarers.

DFDS’ acquisition of the freight and passenger route between Paldiski, Estonia, and Hanko, Finland was approved by the Estonian competition authority on 28th September 2016. The 21,856gt/1997 built Liverpool Seaways will be transferred to the route. In 2017 DFDS is expected to take delivery of two new Ro-Ro vessels that are being built in Flensburg. Also, the agreement on technical operation of the St. Peter Line ferries Princess Anastasia and Princess Maria is set to expire. DFDS will relocate the Lithuanian crews from these ships to the newbuilds, which will be registered in Lithuania. The 4,100 lanemetre capacity ships will receive flower names in line with the 6 Ro-Ro ships already in service. St. Peter Line’s Princess Anastasia will be refurbished and re-chartered to her present operator for continued trading in the Baltic Sea. Moby and St. Peter Line have formed a joint venture and as Moby is already renowned among the German clientele, they will be in charge of the marketing in Germany, while St Peter Line will continue handling sales in Russia. The Princess Maria will transfer to the Mediterranean services of Moby Lines and is to start trading to Sardinia in her current condition. The Princess Anastasia and Princess Maria were sold to Moby for €22 million and €15 million respectively.

DFDS announced on 30th September that it had finalised an order of two freight ships (Ro-Ro) new buildings. The order is part of DFDS’ ongoing fleet renewal to accommodate the growth of freight traffic, increase operational efficiency and reduce the environmental impact. The two ships will be built by Jinling Shipyard in China for delivery in the beginning of 2019. DFDS has options for four additional ships. The newbuilds are designed to each carry 6,700 lane metres of freight equivalent to around 450 trailers. The ferries represent a new generation of environmentally friendly and exhaust scrubber equipped Ro-Ro ships as they comply with the latest environmental rules of the new IMO-standard EEDI (Energy Efficency Design Index). The investment in the two new ships totals around DKK 1.0bn, to be paid during the period from ordering to delivery in 2019. From 2nd October the Rotterdam- Immingham route benefitted from the addition of the 10,471gt/1999 built Friedrich Russ as the fourth vessel on the service.

Thames Operator Orders UK Newbuilds The largest fast passenger ferry order for a UK shipyard in over 25 years was confirmed by MBNA Thames Clippers on 10th October. Two new 170 capacity passenger catamarans will be built at the Wight Shipyard Co. in East Cowes on the Isle of Wight, and will join London’s growing river transport network in summer 2017. Representing an investment worth over £6.3 million, the order will see the creation of 75 new jobs across the Isle of Wight and London, and the involvement of over 100 businesses in the South of England as part of the delivery supply chain. When the two new fast ferries join the MBNA Thames Clippers’ river bus service in central London they will add 14 per cent additional capacity to the company’s network. They swiftly follow the addition of two vessels in late 2015, in total adding an additional 30 per cent capacity in two years. MBNA Thames Clippers will become the biggest commercial passenger fleet operating solely in English waters when the two newbuilds are delivered. The rebranded Wight Shipyard Co. delivered Red Funnel’s Red Jet 6 in July.

CalMac, DFDS and various other news