Aran Ferries has been awarded the new contract to provide a passenger service between the three Aran Islands and Ros an Mhíl on the mainland, along with a road transport service between Ros an Mhíl and Galway city for the period 2017-2022. This contract was effective from 1st December 2017 to 30th November 2022. Under the contract, return sailings will be provided between Inis Mór and Ros an Mhíl and Inis Meáin/Inis Oírr and Ros an Mhíl every morning and afternoon, seven days a week, with additional early afternoon sailings on Sundays from May to September. In addition, the price of a return ticket for islanders will be capped at €10 (adult fare). The total cost of the contract is €5.9 million. 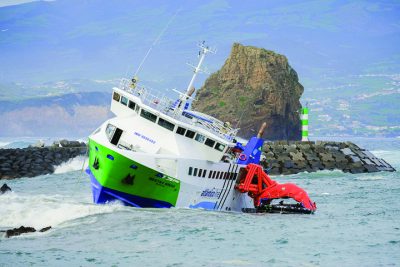 Atlantico Line’s 748gt/2013 built Mestre Simao ran aground off the port of Madalena on the island of Pico in the Azores on 6th January in bad weather (above). The vessel was arriving from Faial prior to continuing on to Sao Jorge but came to grief after a suspected engine failure when heavy seas subsequently pushed her ashore. The 61 passengers and 9 crewmembers were safely evacuated but the ship suffered considerable hull damage on the rocky coastline.

This will be the fifth vessel that Austal has delivered to French Polynesia since 2002. Austal has previously designed and built four vessels for the Groupe Degage comprising two 69m monohull cruise vessels, a 56m vehicle passenger catamaran ferry, and an 80m vehicle passenger catamaran ferry. This Austal design features seating capacity for 620 passengers and garage space for up to 30 motorbikes, small vehicles and cargo. With a top speed of 36 knots it will be fitted with Austal’s Ride Control System to improve seakeeping and provide greater passenger comfort on the Papeete-Moorea route in French Polynesia. The new ferry will be designed in Australia and construction of the vessel will commence at Austal Philippines during 2018, with delivery scheduled for July 2019. 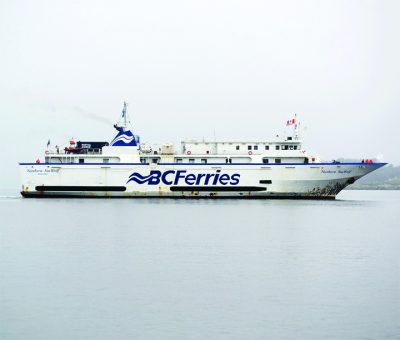 BC Ferries’ 2,679gt Northern Sea Wolf (above), the vessel acquired for the new route from Port Hardy to Bella Coola, transitted the Panama Canal on 1st December having departed from Piraeus, Greece, on 3rd November on the 10,097 nautical mile delivery voyage. The ship’s next call was Manzanillo, Mexico. The Northern Sea Wolf was built in 2000 and will accommodate a minimum of 35 vehicles and 150 passengers and crew. Upon arrival in British Columbia the ferry will undergo a major upgrade at Esquimalt Drydock from December 2017 to April 2018, following a competitive bidding process. BC Ferries has awarded two major contracts to Esquimalt Drydock, the first is a $2 million docking contract for underwater components and the second is an $18 million contract, also involving other local contractors and suppliers for the interior and safety upgrades. The major upgrade will include dry docking, interior and exterior painting, overhauling the propulsion engines and gearboxes, installing new electrical generators, upgrading the switchboards, installing new navigational equipment, and upgrading shipboard safety equipment and systems. BC Ferries will also update crew and passenger areas and amenities by adding a full galley, a dedicated dining area, a newly configured seating lounge and prime outdoor viewing areas on the upper outer decks.

Blue Star Ferries has developed a 145m long, 1,400 passenger and 1,000 lanemetre capacity LNG-fuelled newbuild design that employs cutting-edge technology to achieve reductions in total propulsion energy demand. HydroComp of the U.S.A has been co-operating with NAP Engineering, Helengi Engineering and Blue Star Ferries. The project, co-funded by the EU, has the name Poseidon Med II.