Balearia’s first of two LNG-powered Ro-Pax ferries was floated out on 30th March. Named Hypatia De Alejandria she is expected to enter service on the Balearic Island services in early 2019. The pair of NOAS designed/Visentini built ships will be the first LNG ferries of this size in the Mediterranean. They each have a capacity of 2,100 freight lanemetres, 810 passengers, and 150 cars. Recently the Spanish company cancelled the order for another LNG vessel to be built by La Naval, a shipyard in financial trouble. Balearia is to employ the 33,958gt/1999 built Finnclipper in May, when the latter is replaced by the 45,923gt/2007 built Finnswann on the Naantali-Kappelskär route.

Brittany Ferries’ 27,414gt/2007 built Cork-Santander vessel Connemara concluded her previous career as the Asterion serving Venice on 8th April. The 33,635gt/1998 built Elyros replaced her from 9th April with the latter being replaced by the 38,261gt/1992 built El. Venizelos from 3rd April. The long-term replacement, the 31,804gt/1991 built Grand Spring (to be renamed Asterion II) was due to be delivered to Greece from China in April. 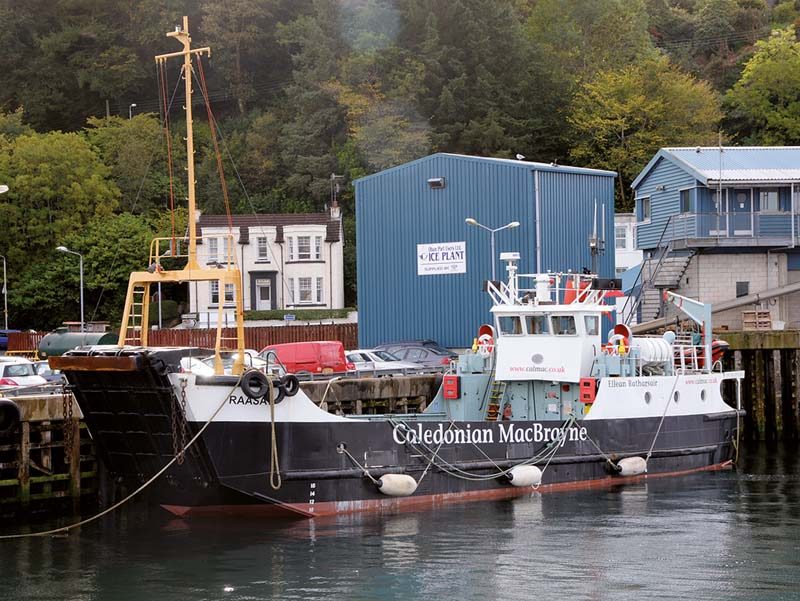 CalMac has said farewell to one of its longest serving vessels which has retired from west coast service. The 69gt Raasay (above) served the Sconser to Raasay route for 21 years from her launch in 1976 until increased traffic from the island made her unsuitable. She was the last of eight ‘Island class’ ferries launched and is capable of carrying six cars and up to 75 passengers.

Meanwhile the Summer 2018 schedule got off to a troubled start with the 6,753gt/1995 built Isle of Lewis having problems, the 4,719gt/1988 built Isle of Mull covering the Coll/Tiree run with an as required stop at Craignure on the return and the 1,599gt/2003 built Coruisk serving Oban-Mull on a shuttle service running as a first come first served basis. The 5,499gt/1998 built Clansman was also still sidelined at Greenock awaiting a new propeller, sourced from Scandinavia. A wire rope became entangled in the propeller as she proceeded to dry dock, causing much damage.

Brittany Ferries, DFDS and Stena are amongsd the news this month