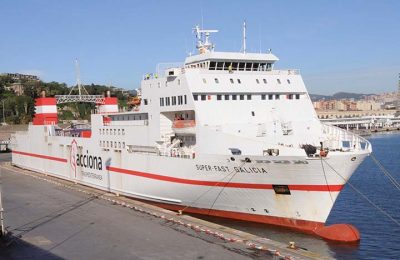 Acciona Trasmediterranea’s 16,686gt/ 2003 built Super Fast Galicia (above) finished her Trinidad & Tobago service on 14th April prior to returning to Europe for further operation with her owners. Her passenger capacity is due to be increased from 120 to 300 before re-entering service. The ship had been on charter for 3 years and with no replacement arranged. The company has also negotiated the purchase of the incompleted ferry Viking ADCC (sister to the 35,918gt/2008 built Viking XPRS). The new ferry will be delivered before the peak season of 2018 and will have a capacity of 1,500 passengers, 450 vehicles and 600 lanemetres for freight.

Atosim Lampung Pelayaran PT’s 151m long Ro-Ro passenger ferry Mutiara Persada III caught fire in the Sunda Strait near Palau Tundra Island, Indonesia on 9th April. The ferry was en route to Panjang from Jakarta with 76 passengers when a fire broke out on the car deck. The crew requested assistance and attempted to put out the blaze as it spread across multiple vehicles. ed up to the upper deck to wait for rescue. Rescue ships arrived a short time later and assisted in extinguishing the blaze. The 15,380gt/1991 built Mutiara Persada III was escorted back to Tanjung Priok. 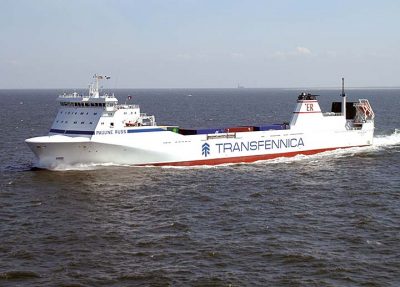 Baleària has chartered the 10,488gt/1999 built Pauline Russ (above) to operate the freight only Algeciras-Tánger Med service. She replaces the 14,398gt/1994 built Llevant.

CalMac’s new ferry is the subject of a public naming vote. The shortlist has been put forward by the CMAL Board and the Scottish Government with help from the Clyde River Steamer Club to reflect the ferry’s Scottish roots. The ferry, currently known as Hull 801, is earmarked for Arran so all names are inspired by Arran’s history and geography. The shortlisted names are – Glen Sannox, Goatfell, Hutton, Glen Iorsa. The two new 102.4m long dual-fuel ferries being built will have a beam of 17m, a 3.7m draught, 3.7m, a service speed of 14.5/16.5 knots plus capacity for 1000 passengers, 127/132 cars and 16 HGVs. 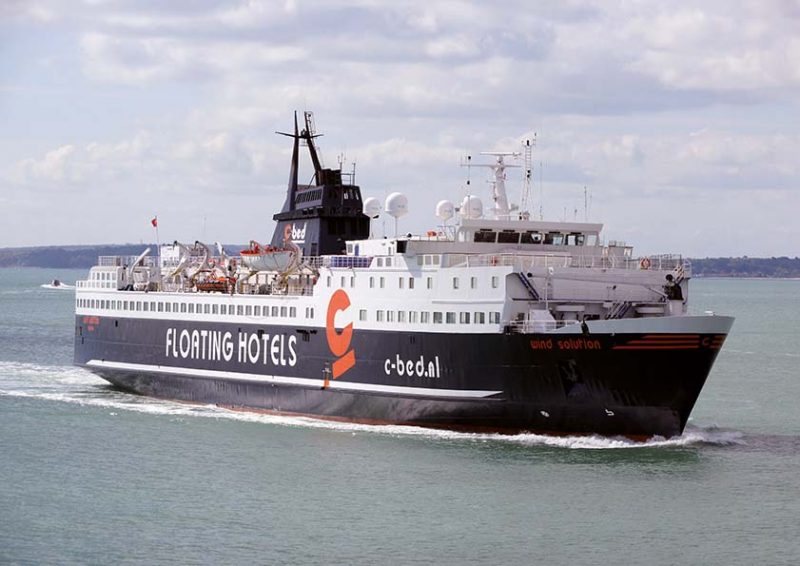 C-Bed’s 8,893gt/1969 built Wind Solution (above) has been assigned to the Rampion Wind Farm project off Worthing, West Sussex, for floating accommodation. The vessel made her first visit to Portsmouth for stores on 25th April having arrived from Rotterdam.

Cobelfret’s first 60,000gt and 7,800 lanemetre capacity newbuild from the Hyundai Mipo Shipyard has been named Celine and will be delivered in summer 2017 for service on the company’s North Sea routes.

Elb-Link recommenced again on 22nd May across the River Elbe between Cuxhaven and Brunsbuttel using only the 5,233gt/2010 built Muhumaa (operating as the Grete) with the other vessel having gone on charter elsewhere.

Various news for Balearia, HH Ferries, Seaspan and much more