Cobelfret’s 74,273gt newbuild Celine arrived at Rotterdam on 20th October after her delivery voyage. As well as operating weekly on the Rotterdam-Zeebrugge-Dublin route, it is expected that the ship will also sail to Purfleet and Killingholme from Rotterdam. The second ship will be christened Delphine and is due for delivery later in 2017.

Condor Ferries’ conventional freight and passenger ship, the 14,000gt 1999 built Commodore Clipper, resumed normal service on 11th October after a month spent in dry dock undergoing a planned £2.7 million maintenance programme. The company chartered in the 7,606gt 1998 built Arrow to cover the ‘Clipper’s freight commitments and she was retained whilst the 11,166gt 1996 built Commodore Goodwill entered dry dock for three weeks on 12th October for routine and remedial repair work.

Corsica Ferries is to serve the Balearic Islands as from 21st April 2018 for the first time. The new route will open between Alcudia (northeast Majorca) and Toulon. Two departures per week will be offered, both day (from Alcudia) and night (from Toulon), with a voyage time of 9 hours. Corsica Ferries’ high market share in Corsica is fuelling the company’s diversification into other services. The ship earmarked for this service is the recently acquired 36,299gt 2008 built Pascal Lota (ex-Superstar of Tallink).

Finnlines has sold the 30,144gt 1999 built Ro-Pax vessel Finneagle to the Grimaldi Group as part of a strategy aimed at optimising the use of the company’s vessels and routes in order to improve profitability. The 2,459 lanemetre and 835 passenger capacity Finneagle was chartered out to the Grimaldi Group from June 2017 and delivery of the vessel to her new operator took place in October when she was renamed Euroferry Corfu. In September, Finnlines sent its first 28,002gt Breeze Class ship to the shipyard for lengthening as part of a programme to be undertaken on the Finnsky, Finnsun, Finntide, and Finnwave. 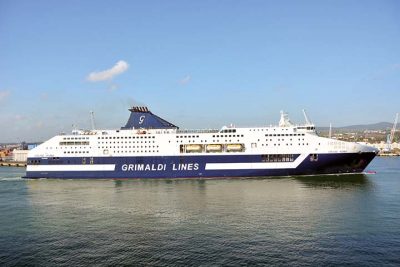 Also, the 54,310gt 2008 built Cruise Roma (above) and Cruise Barcelona will be lengthened at an estimated cost of €60 million. The passenger capacity will be increased through the addition of 500 extra seats and 50 cabins. Space will also be created for an extra 50 trailers and 50 cars on the vehicle decks. Four mega batteries will also be installed in the lower section of the new sections of ship to enable the ships to switch to zero-emission mode while in port.

Hellenic Seaway’s 30,882gt 1996 built Ariadne started a 6-8 week charter to GNV in October on the Genoa-Tunis & Palermo-Civitavecchia routes with the 30,694gt 1988 built Nissos Samos replacing her. The 14,610gt 1987 built Nissos Rodos is on charter to Caronte & Tourist/TTT Lines on the Salerno-Messina and Genoa-Tunis links whilst the 13,955gt 2007 built Nissos Chios has concluded her long charter to Baleària and returned to Greece. 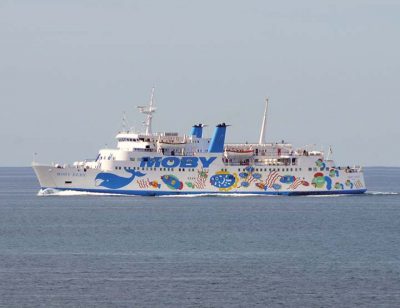 Med Lines is reportedly the operator that has acquired the 5,435gt 1975 built Moby Love, to be renamed Aiolos and the 5,667gt 1966 built Moby Baby (above), to be renamed Anemos, but there is no news of where they will operate thus far. Both ships were towed to Greece for refit.

Moby Lines’ 34,093gt 1981 built Moby Dada plus the 44,307gt 1996 built Rhapsody and 30,318 1981 built GNV Azzurra were chartered to the Spanish Government in September for use as temporary barracks for Guardia Officers drafted into Catalonia during the unrest there. As a result, the ageing 12,187gt 1974 built Moby Vincent covered the Moby Dada’s schedule whilst the 9,279gt 1974 built Moby Niki assumed the Vincent’s sailings.

Molslinjen is upgrading the fastcraft Max Mols (5,617gt/1998) and Express 1 (10,504gt/2009) with work including an extensive mechanical overhaul for the ageing Max Mols and a new lift between the car deck and accommodation. The vessel was dry-docked until 5th November and returns to dry-dock again in May 2018 for a complete refurbishment of her accommodation. The Express 1 (ex-Norman Arrow) was dry-docked from 6th November to 15th January to receive additional accommodation fitted to seat 400 more passengers and will have her accommodation refurbished in April 2018. 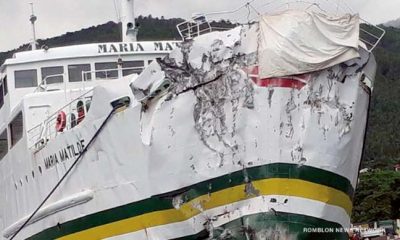 Montenegro Shipping Lines Inc.’s 1,266gt 1971 built ferry Maria Matilde ran aground on rocks and hit a cliff at around 0430 on 26th September on the coast of Calatrava City area, northern Tablas Island, Tablas Strait, Philippines with 87 passengers being injured. The ferry was en route from Odiongan port, southeast Tablas, to Romblon Island, with 2,151 passengers and vehicles on board. Officials said the grounding was caused by restricted visibility in heavy rain, but passenger statements contradict the official version.

Polferries’ newbuild contract project for the construction of a new shuttle ferry was signed on 16th October and will be built by the Gryfia Shipyard in Szczecin. The ship will be 200m long with a 30m beam.

Seabourne Freight is the name of the company that is rumoured to be planning to operate an Ostend-Ramsgate route, six sailings per day, using 3 ships, from March 2018. It will initially be freight only with a passenger service potentially following in the summer. 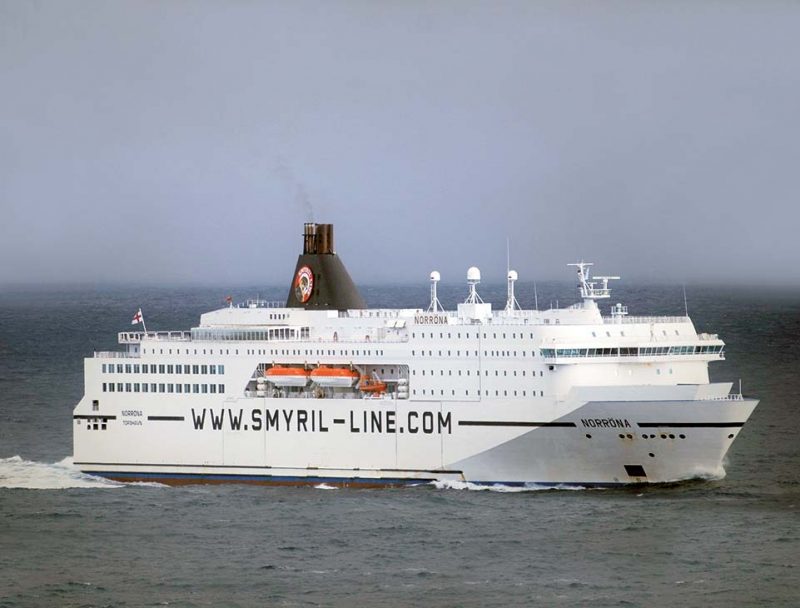 Smyril Lines’ 35,966gt 2003 built Norrona (above) was stranded off Hirtshals on 14th October with engine problems. There were approximately 700 passengers aboard and at around 2300 a tug went to the ship’s aid to take her in to port several hours late. Repairs were to be undertaken prior to the ship proceeding to the Faroe Islands.

St. Helena Line announced in October that it is planning to withdraw the 6,767gt 1990 built passenger cargo ship RMS St. Helena from service in 2018. Scheduled passenger flights finally began on 14th October, providing the main passenger access to the Island. London shipbroker CW Kellock & Co Ltd. have been appointed to handle the sale of the faithful and much-loved ship. The ship is expected to finish her last voyage in Cape Town on 15th February 2018. 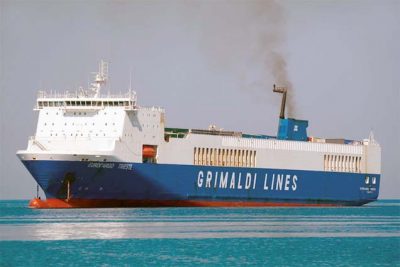 Valiant Shipping’s 26,536gt 1997 built Eurocargo Trieste (above) got into bother on 7th October whilst manoeuvring to leave her berth at Patras in Greece. She struck the tanker Aegeas III which was moored against the 25,757gt 2008 built Superfast 1 during bunkering operations. All three vessels suffered damage but the tanker bore the brunt of it, sustaining a 1m x 0.35m hull breach on her portside stern 2m above the waterline. 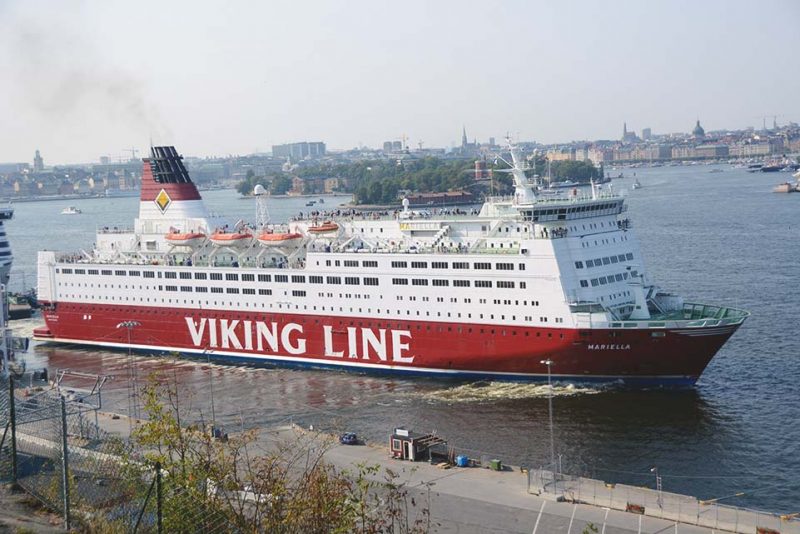 Viking Line continued the refurbishment of the 37,860gt 1985 built Mariella (above) 10th-22nd September when the ship was withdrawn from service for the renewal of both the Coffee & Joy café adjoining the children’s play area and the tax-free shop. The ship also underwent several technical upgrades. The Viking FSTR’s Helsinki-Tallinn season ended on 17th October instead of 22nd October as planned due to technical issues that caused a string of cancellations. One wonders if she will have a 2018 season with Viking Line?

Zhongshan Hong Kong Passenger Shipping Co-op Co., Ltd. signed a contract with Norwegian ferry builder Brødrene Aa, Hyen on 12th October for three high-speed carbon fibre catamaran ferries intended for the Chinese market. The construction of the vessels was expected to begin at the shipyard in Hyen in November 2017. To be completed and delivered by June 2019, the ferries will operate between Hong Kong and Guangzhou. With a capacity of 300 passengers, two of the vessels will be 42m long with a maximum operating speed of 40 knots. The third vessel will also be 42m long but will have a capacity of 230 passengers and a maximum operating speed of 37 knots. In 2015, Chinese Chu Kong Shipping made an equity investment in Brødrene Aa. The objective was to establish a joint composite manufacturing facility in China as well as to provide market opportunities for completed vessels from Brødrene Aa’s yard in Norway.