Alternative Transport, Turkey’s rapidly expanding Ro-Ro operator, has secured a €27.5 million loan from the European Bank for Reconstruction and Development (EBRD) to finance the acquisition of a new Ro-Ro ship. Alternative Transport is investing in a new €55.5 million-vessel, the 32,770gt/2017 built Meleq (above), with a capacity of 283 trailers to convey wheeled cargo such as cars, trucks, trailers or railway wagons. The new ship will enable the firm’s much-needed expansion on the route serving Haydarpasa (Istanbul) and the Italian port of Trieste. In addition, the EBRD will provide a €4.5 million junior loan under its Green Logistics Programme, which is funded by the Global Environmental Facility. Separately, Turkey’s Isbank is extending a parallel loan of €16 million. Alternative Transport was established in 2013. 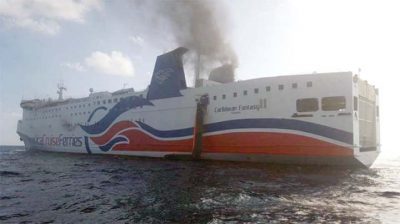 America Cruise Ferries’ 27,362gt/1989 built Caribbean Fantasy (ex-Chihuahua Star/Victory) was reported as being sold for scrap in July for $1.52 million. This is no surprise as the fire damaged ship has been laid-up at Freeport since her major fire in August 2016 off Puerto Rico (above). Balearia’s new cruiseferry due for delivery from the Spanish La Naval-CNN shipyard in 2019 could be in doubt following reports that the yard appears to be suffering something of a financial crisis following recent years of losses. Re-financing efforts were underway in July with cash advances on ships being built also requested. Balearia is also the Spanish shipping company that is interested in re-opening the Gijon-Nantes (Montoir) Motorway of the Seas route abandoned by LD Lines in 2014. The service would be subsidised by the Spanish Government, the Principality of Asturias and the City of Gijón for two years to cover initial losses. The Ro-Pax service could resume in 2018 if talks prove fruitful. 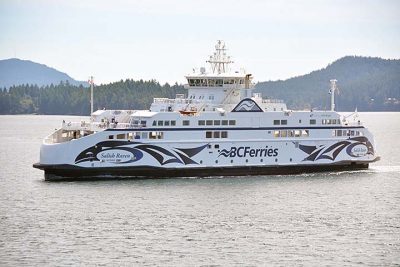 BC Ferries revealed the wrap that now adorns the hull of the newly delivered 8,728gt/2017 built Salish Raven (above). In July at the company’s Richmond refit facility. The unveiling was made by Musqueam First Nation’s Thomas Cannell, who designed the artwork. Coast Salish artist Thomas Cannell’s design depicts the beauty of the powerful, intelligent raven. His vision of this majestic bird certainly engages his audience with a new style of Coast Salish art. The Salish Raven will enter service on the Tsawwassen to Southern Gulf Islands route in autumn 2017. The vessel has recently completed a 10,440 nautical mile journey from Gdansk, Poland. She features two car decks and has a service speed of 15.5 knots, powered by three dual-fuel Wartsila 8L20DF engines. On 28th July BC Ferries announced that the 4,939gt/1964 built Queen of Nanaimo had been removed from service on the Tsawwassen-Southern Gulf Islands route due to a mechanical problem on the starboard controllable pitch propeller. The 8,728gt/2017 built Salish Eagle will continue in service and a replacement vessel, the smaller 1,476gt/1965 built Bowen Queen, was brought into action. The repairs to the Queen of Nanaimo were completed by the end of July. Upon the debut of the Salish Raven, the Salish Eagle, which entered service in June, moved to Long Harbour on Salt Spring Island to sail in the Southern Gulf Islands. 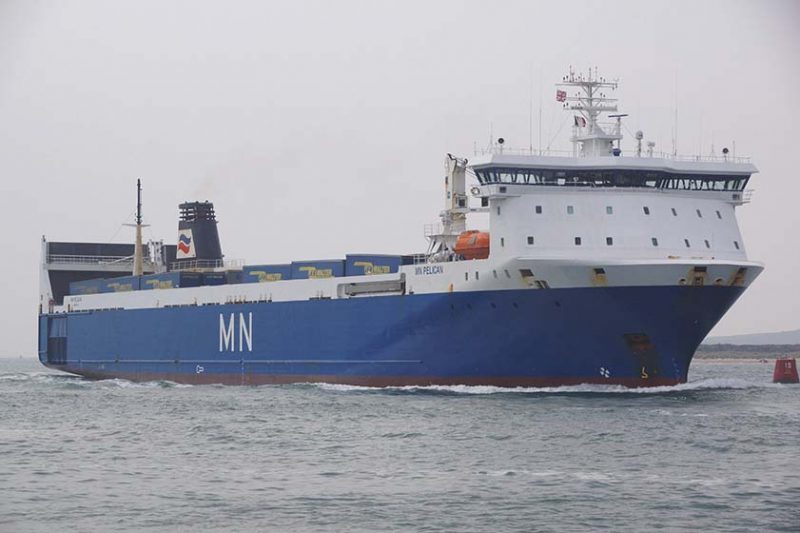 Brittany Ferries announced in mid-July that the charter of the 12,076gt/1999 built Ro-Ro ship MN Pelican (above) had been extended for a further two years. The 155m long and 72 trailer capacity ship has been operating between Poole and Bilbao twice weekly since February 2016.