Baleària carried 10% more passengers and cargo in 2016 compared to 2015 and over the next five years the shipping company’s strategic investment plan will account for 450 million Euros. The funds will be invested in three new LNG-powered ships and terminals that use smart technology solutions (Barcelona, Valencia and Palma). The new ferries will be built at the LaNaval shipyard and at Cantieri Navale Visenti whilst existing ships will also be brought in and existing fleet members will be modernised. In the period November 2015-October 2016 the Baleària Group’s turnover totalled 329.5 million Euros, which is 13% more than the previous year thanks to an increase in ships and services. In total, 3.5 million passengers, 750,000 vehicles and more than 5 million linear metres of cargo were carried across the route network. The fleet of 25 vessels travelled more than a million miles in 2016 on 18 routes, which accounts for 20% more than the year before, mainly due to the opening of new connections with Melilla and Algeria and expanded services for the Balearic Islands routes.

The 18,345gt/1980 built Regina Baltica has been refitted at Bremerhaven and departed the German port on 4th March bound for Vigo. Reports in Spain suggest that she is to join the Balearia fleet having most recently acted as an offshore accommodation vessel. 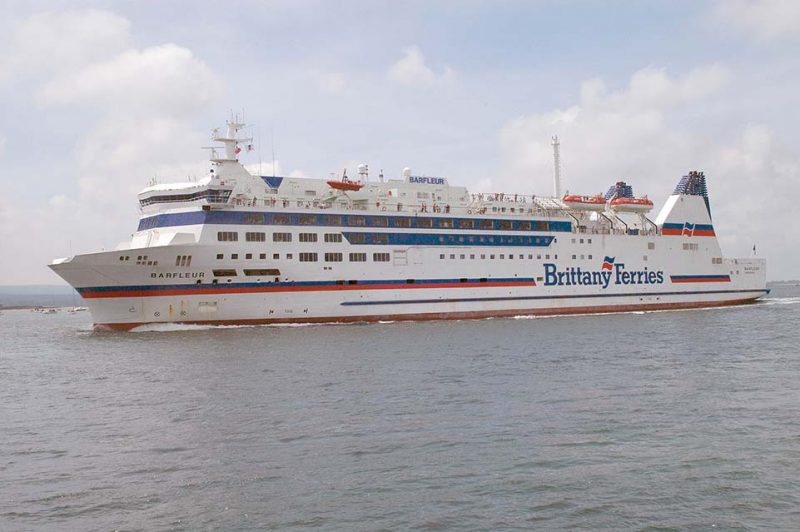 Brittany Ferries’ 20,133gt/1992 built Poole-Cherbourg Ro-Pax ferry Barfleur (above) will offer a new premium lounge known as the Barfleur Club Lounge from 1st July. Accessed by boarding card, access to the lounge will include USB charging points, newspapers, complimentary tea, coffee and cold drinks, as well as a sleep kit for overnight crossings. The new 20-seat lounge will cost £18 for daytime crossings and £25 for overnight sailings. This year the Barfleur celebrates 25 years in service, most of which have been at Poole. Brittany Ferries recorded a 3% rise in its overall passenger numbers, reaching over 2.67 million passengers in 2016. The company’s turnover for the year was also up by 5.2% to 454.9 million Euros. The increase, recorded for the fourth consecutive year, represents the company’s best performance in a decade. In addition to growth in passenger numbers a rise in freight carried was also recorded, 204,000 units in total in 2016, up by 6.7%.

Elb-Link ferries Anne-Marie, formerly Saaremaa/5,233gt/2010 built, and Grete, formerly Muhumaa/5,233gt/2010 built, were laid up at the Steubenhöft on the evening of 28th February thus closing the Cuxhaven- Brunsbüttel service across the River Elbe in Germany. Reports suggest that the financial backers had withdrawn their support owing to the operation encountering financial difficulties. The revival of this operation sadly appears to have been short-lived. A few days later the Muhumaa departed for a charter in Norway. Repots since have stated that the Estonian shipping company Saaremaa had chartered the two ferries via a bank and then further chartered them to Elb-Link. The charter was suddenly terminated without warning. Financial issues go back to 2016 when, in July 2016, losses were around 1.41m Euros and have clearly worsened since. The regional government has confirmed talks to re-start the service.

IoMSPCo. announced on 13th February that the 12,747gt/1998 built Ben-My-Chree was ready to resume sailings following inspection and repairs. The ship had made contact with King Edward Pier on arrival in Douglas harbour on the evening of 12th February after encountering significantly stronger than forecast easterly winds. There were no reported injuries to passengers or crew but shore side equipment and railings on the ship’s upper deck etc. were damaged.

A few days later on 24th February came the news that the 5,743gt/1998 built Manannan will commence her 2017 season on 31st March. After spending the winter in Manx waters, where a variety of annual maintenance procedures were undertaken, the vessel was scheduled to sail to Merseyside on 1st March for dry docking, which she entered on 3rd March. Prior to returning to service the Manannan will conduct berthing trials at Larne. Similar to the trials conducted at Holyhead in 2016, this is part of the Steam Packet Company’s ongoing assessment of the suitability of alternative facilities to allow for flexible and robust contingency planning. The Steam Packet Company has previously operated sailings between Larne and Douglas during the annual Isle of Man TT festival, using the charter fast craft P&O Express. In April sailings from Douglas to both Dublin and Belfast will commence. 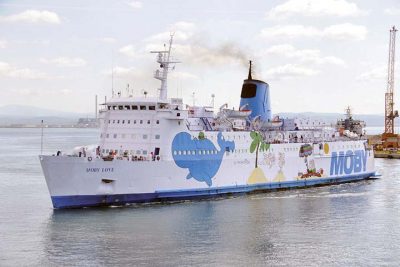 Moby Line’s 5,435gt/1975 built Moby Love (above), built as Sealink SNCF’s St. Eloi, has reportedly been sold and will become the Chrysa, operating in the Azores in place of the previous charter vessel, the Express Santorini. The latter was also built as a Sealink SNCF vessel, namely the Chartres.

Naviera Armas’ new Ro-Pax ferry, to be built at the Armon shipyard in Gijon, has been redesigned, along with the proposed sister vessel, to operate on a dual system for LNG. In early March the steel cutting for the newbuild was due to begin ‘soon’ for the 182m long, 28.4m beam, 1,800 passenger and 246 vehicle/109 truck capacity ship. With a speed of 26 knots, the new ferry is expected to cost 125m Euros.

Pentland Ferries announced on 3rd March that it has ordered a new £14m ferry to replace the 2,382gt/2008 built Pentalina on the Gills Bay (Caithness)-St. Margaret’s Hope (Orkney) service. The 85m long newbuild will be built at a shipyard in Vietnam and will carry 450 passengers, 100 more than the Pentalina. Delivery is scheduled for 2018.

Searoad’s new 25,409gt/2016 built Searoad Mersey II lost much of her silicon underwater coating during the delivery voyage from FSG in Germany. The coating was applied by subcontractors to builders FSG while the ship was in drydock at Fayard, Odense, Denmark. This has to be replaced under warranty and the job is likely to take 22 days as, after application, it has to cure. So the Searoad Mersey II was sent to the Captain Cook Dry Dock at Garden Island, Sydney on 25th February. The original Searoad Mersey will return to the Bass Strait service to cover during this period.

Seaspan Ferries Corporation announced the arrival of the second new LNG fuelled ferry on 27th February. The 4,810gt/2016 built Seaspan Swift arrived at the SFC Tilbury Terminal in Delta after an eight-week journey that spanned a total of 10,661 nautical miles following her construction at the Sedef Shipyard in Istanbul, Turkey. Sistership Seaspan Reliant arrived in December and entered service in January. The 148.9 metre ferry, which can accommodate up to 59 HGV trailers, then underwent a series of regulatory inspections and crew training programs throughout March before entering operation in April. Seaspan Ferries Corporation currently operates a fleet of seven ferries out of five terminals in British Columbia, Canada, and supplies more than 50% of all cargo to Vancouver Island. 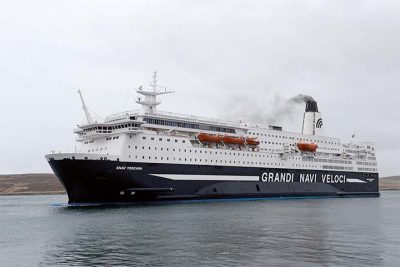 SNAV’s 30,318gt/1981 built SNAV Toscana (above) suffered a fire whilst approaching Palermo on 19th February with 113 passengers and 75 crewmembers on board, none of whom were hurt. The fire started in the engine room while the ferry was still a mile from port. The Captain took immediate action to manoeuvre the ferry into port in order to help rescue services tackle the issue. After the event the Palermo prosecution was considering whether or not to open an investigation as there was a chance that the fire was caused by arson. The 33,336gt/1989 built SNAV Lazio (formerly the Pride of Portsmouth) has been renamed GNV Atlas. The renaming appears to be the first of three as the 33,336gt/1989 built SNAV Sardegna (formerly Pride of Le Havre) is set to become the GNV Cristal and the SNAV Toscana (formerly the Peter Wessel) will be renamed as the GNV Azzurra. 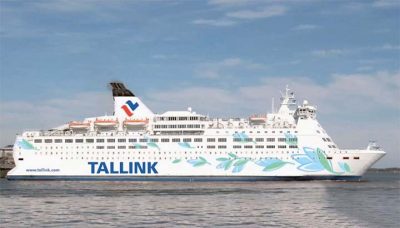 Tallink’s 35,154gt/1989 built Isabelle emerged from her 2017 overhaul resplendent in a white livery (above). The ship operates Stockholm-Riga and has done since purchase from Viking Line in 2013.

Brief ferry news from around the world