Basto Fosen’s new 142m long vehicle ferry Basto IV was launched in late July, becoming one of the longest double ended ferries in the world. The ship was built at the Sefine Shipyard in Turkey and will serve the Horten- Moss route in Norway from 1st January 2017. 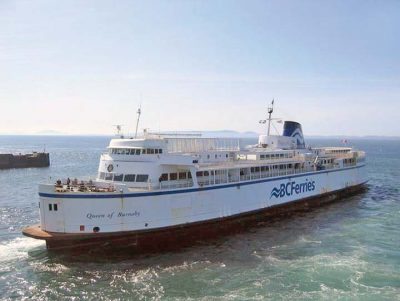 BC Ferries announced on 28th July that the elderly 4,903gt/1965 built Queen of Burnaby (above) would be back on the Comox-Powell River the next day following the required repairs to her propeller hub. This released the Island Sky back to the Saltery Bay-Earls Cove route whilst the North Island Princess resumed her Texada Island-Powell River route with a modified schedule. The Queen of Burnaby is in the twilight of her career and will be replaced by the first of the three new LNG fuelled vessels, the Salish Orca, early in 2017. 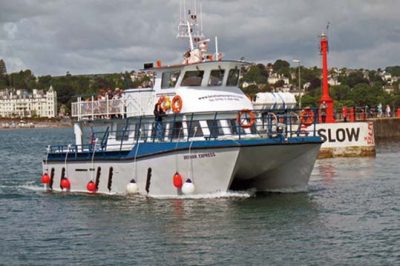 Brixham Express: The long-awaited Brixham Express catamaran (above) finally carried her first passengers across Torbay on 24th July. The £1.5million ferry, which was custom-built from an existing hull in Ireland, arrived in Torbay on 18th June, which was 19 months after the company began to operate crossings. Once crew familiarisation was complete the craft took over from the stand-in vessel Brixham Vitesse. The Brixham Express is able to cross the bay in 15 minutes and accommodate 40 passengers in winter and 100 in summer. The company has received £543,939.80 so far in subsidy payments from the Department for Transport via Torbay Council. No subsidy has been paid since the end of March last year as the vessel used did not comply with the seating capacity and on-board toilet requirements in the contract. However, subsidy payments will resume now that a suitable vessel is being used.