C-Job Naval Architects has delivered the concept design for a series of five sustainable car and passenger ferries to the City of Amsterdam. The vessels will operate 100% on electricity, thus providing an emission-free urban transport solution.

CalMac’s new duel-fuel ferry Glen Sannox, launched in November at the Ferguson Shipyard on the River Clyde, is set to have her bulbous bow replaced during a visit to the Garvel Dry Dock. The shipyard is unhappy with the current profile so a new bulbous bow has been fabricated. Ferguson’s confirmed that the date for the ferry to be delivered remains the winter 2018/19. 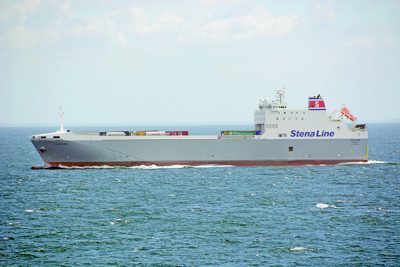 CLdN’s 16,342gt/2011 built Capucine (above) is currently on a 12-month charter to the Italian Ministry of Defence. The company’s second 74,273gt newbuild has been named the Delphine, sister to the Celine.

Condor Ferries has withdrawn from talks to commence a dedicated inter-island passenger ferry service, blaming the States of both Jersey and Guernsey for being too slow in moving the project forward resulting in the two vessels earmarked for charter being deployed elsewhere. Concerns had also been raised that the terms of the tender for the trial had changed from a one-year service to five years. Condor Ferries is the second operator to withdraw their interest, after marine services firm the Bachmann Group pulled out following concerns over costs. By 10th February it emerged that Manche Iles Express was the preferred bidder for the service.

Doolin2Arran Ferries will take delivery of a new 26m ferry in May. The €3 million vessel, which will sail from Doolin to the Aran Islands and offer Cliffs of Moher cruises, has been ordered by County Clare’s Garrihy family who run Doolin2Aran Ferries. The vessel is being built by OCEA Shipbuilding in La Rochelle, France. The 200 seater vessel, yet to be named, will include custom-built seating, air-con and an advanced computerised stability system aboard.

Fjord1 of Norway has taken delivery of two battery powered ferries from the Tersan Shipyard in Turkey. The Ro-Pax newbuilds Eidsfjord and Gloppefjord will operate the Anda-Lote route in Nordfjord on the west coast of Norway.

Finnlines, via subsidiary, Rederi Aktiebolaget Nordö-Link, has bought back the 45,923gt/2007 built Star Class Ro-Pax ship Nordlink from the Grimaldi Group’s Grimaldi Line. Back in 2013, the ship was sold by Finnlines to the parent company because of insufficient volumes in the Baltic. However, volume trends have reversed and the vessel initially served on the Malmö-Travemünde route as refit cover prior to moving to her assigned Naantali-Långnäs-Kapellskär schedule. Exhaust scrubbers will be fitted in March plus the 4,215 lanemetre and 554 passenger capacity ship will undergo refurbishment of her public areas. The ship has also been renamed as Finn Swan.

The Breeze Class Ro-Ro ship Finntide was lengthened by 30m in November and the second vessel, Finnwave, was completed in the New Year. The 28,002gt/2012 built Finnsun and Finnsky will be so dealt with by late May 2018.

Grimaldi Ferries has taken the Tirrenia vessels 36,825gt/2002 built Amiscora and 36,825gt/2001 built Bonaria into its fleet and the ships have been renamed Mykonos Palace and Cruise Bonaria respectively. Tirrenia’s 35,736gt/2003 built Athara is the latest in the fleet to receive a themed livery, this time featuring Superman. 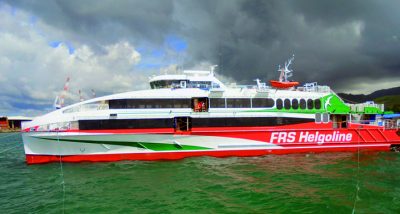 FRS Helgoline’s new 56m catamaran for the Hamburg-Helgoland service was launched at 0700 on 7th January at the Austal Shipyard in Cebu, the Philippines. The 108dwt vessel (above) will be able to carry 692 passengers and will undergo extensive sea trials prior to shipment to Germany. Meanwhile the former Halunder Jet has arrived in Seattle to begin her new career as the Clipper V. The 52m, 440 passenger capacity craft will operate Seattle-Victoria, B.C from spring 2018.

IoMSPCo’s Ben-my-Chree completed 2017 with a reliability record of more than 99%. The ship, which operates services throughout the year, including daily sailings to Heysham, seasonal crossings to Ireland and weekend services to Birkenhead during the winter months, operated 1,375 sailings, and travelled more than 83,000 miles in 2017. She also had a 99.49% technical reliability record, with only seven trips cancelled during 2017. Overall reliability was 97.01% once weather cancellations were taken into account. The 12,747gt/1998 built Ben-my-Chree is scheduled to go to dry dock for her planned biennial overhaul 17th April-8th May, when £1.6 million will be spent on her. While the ship undergoes overhaul, the 5,743gt/1998 built Manannan will operate the morning sailings to Heysham.

Merseytravel has drawn up plans for a new £6 million Mersey ferry and commuters will be asked what type of facilities they want on board. Naval architects have prepared initial plans and there will be a period of public consultation. It would be the first new ferry on the Mersey for nearly 60 years and would be ready for service before 2021. The current Mersey ferries, the Snowdrop, formerly Woodchurch, and the Royal Iris, formerly Mountwood, are both nearly 60 years old. In spring 2017 the cross river ferry service was hit by a series of technical problems, which highlighted the need for a new vessel. 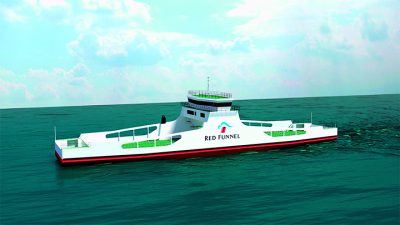 Red Funnel announced on 14th February a £10 million order for a new ro-ro freight ferry from UK shipbuilder Cammell Laird at Birkenhead. The new ship (above), to be delivered in Spring 2019, is designed to provide additional year-round freight capacity for Red Funnel’s Southampton-East Cowes route which currently handles 53% of all freight movements across the Solent. At 74m in length with a 17m beam, she will provide 265 lane metres of roll-on/roll-off freight capacity and will carry up to 12 passengers plus a crew of 6-7. The hull shape has been designed specifically to reduce wash and a propulsion package has been selected to make her highly fuel efficient whilst meeting the latest Tier III emission regulations. The use of proven azimuth thrusters, supplied by Rolls Royce, will also make the ship very manoeuvrable. Power will be provided by two Cummings Tier III diesels and the service speed will be 12.5 knots @ 85% MCR. The crossing time of 55-60 minutes will be identical to Red Funnel’s existing Raptor Class ferries and the newbuild will use the existing berths in Southampton and East Cowes. The fourth ferry will ease pressure on the main service vessels and, at the time of the announcement, the Red Eagle was receiving additional passenger capacity for March completion whilst the new Red Jet 7 is being built for a May debut representing £20 million of investment.

Viking Line announced on 1st February that it had decided not to exercise the option to construct another vessel included in its shipbuilding contract with Xiamen Shipbuilding Industry Co. Ltd. The option has expired. The company continues to modernise the fleet with both the Viking Grace and Amorella (Turku-Stockholm service) being taken out of service briefly during January and February. The 57,565gt/2013 built Viking Grace returned to service on the 21st of January and the 34,384gt/1988 built Amorella did likewise on 4th of February.