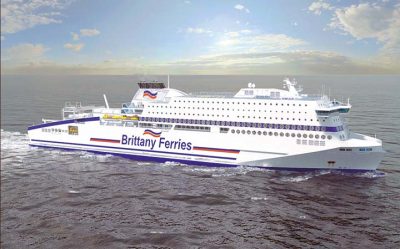 On 21st June Brittany Ferries confirmed the construction of a new cruise ferry to join its 10-ship fleet. The new ship is to be named Honfleur (above), following a long tradition of naming ships after destinations served by the company. The Honfleur promises to be the most environmentally friendly ship regularly operating in UK waters when she takes to the seas in June 2019. But she will also be a ship that presents a canvas of modernity, comfort and relaxation for passengers on the company’s busiest route, operating from Portsmouth to Caen. The Honfleur will be built at the Flensburger Schiffbau shipyard in Germany over the next two years and will be powered by LNG (liquefied natural gas).

The vessel will be 187.4m long with a beam of 31m, a maximum draught of 6.6m and a gross tonnage of 42,400. The service speed will be 22 knots, there will be 5,200m2 of passenger arras over the 11 decks, 257 passenger cabins and 2,600 lane metres of vehicle capacity (130 freight trailers, or 550 cars and 64 freight trailers). She will carry up to 1,680 passengers and will offer passengers two cinemas, restaurants, boutique shopping and expansive passenger lounges. The Honfleur will operate alongside Brittany Ferries’ Mont St. Michel on three daily return sailings. The Normandie, the cruise-ferry she replaces, will move east to serve the Portsmouth to Le Havre route.

On 6th July came the news that the 22,382gt/2003 built Baie de Seine will be returned to her owners, DFDS, in April 2020. The ship currently operates from Portsmouth to Spain and Le Havre and was formerly the Harwich-Esbjerg ship Dana Sirena/Sirena Seaways. Various reports suggest that haer replacement in the Brittany Ferries fleet will be the third or fourth representative of the new Stena EFlexer Ro-Pax ferries on order from China.

The Danish company ordered two additional Ro-Ro newbuildings from Jinling Shipyard in China on 16th June. The new ships are scheduled for delivery in early 2020 and are planned to be deployed in DFDS’ route network on the North Sea.

The ships are similar to the two ferries ordered in September 2016, for delivery in early 2019, and are likewise designed to each carry 6,700 lanemetres of freight equivalent to around 450 trailers.

DFDS and Eurotunnel entered into long term bareboat charter agreements for two Cross-Channel ferries in June 2015, namely the Rodin (33,796gt/built 2001) and Berlioz (33,800gt/built 2005), which are now the Cotes des Dunes and the Cote des Flandres. The agreement included a purchase option and this was exercised and announced on 23rd June 2017.

Infracapital, the infrastructure equity investment arm of M&G Investments, announced on 30th June that it had agreed to sell its 100% equity stake in Red Funnel to a consortium of UK and Canadian pension schemes led by the West Midlands Pension Fund and the Workplace Safety and Insurance Board of the Province of Ontario. Infracapital has owned Red Funnel since 2007 and has invested significantly in the business over the last 10 years to enhance both service and capacity. The fleet has been considerably upgraded, and both the on-board facilities and customer service have markedly improved with 93% of customers rating the Red Funnel services as Excellent or Good. In 2016, Red Funnel carried over 873,000 vehicles and 3.4 million passengers, compared to 555,000 vehicles and 3.0 million passengers in 2006. Financial terms of the deal have not been disclosed, nor who else is part of the consortium, however the transaction was expected to be completed soon after the announcement. The company will continue to operate as normal and there will be no change to its day to day operations

Caledonian Maritime Assets Ltd. (CMAL) has awarded a £200,000 contract to build a replacement ferry for the island of Kerrera to Malakoff Ltd. of Lerwick in Shetland. The ferry, which will maintain the link between the small island of Kerrera and the mainland south of Oban at Gallanach, will be built in Lerwick and delivered to Calmac Ferries Ltd. in August 2017. The 12m long vessel will be called the Carvoria and will replace the existing ferry Gylen Lady.

The 500m crossing had been operated for 22 years by Kerrera Ferry Ltd., run by local man Duncan MacEachen, who, along with three crewmates, have now become CalMac employees since the route was added to the CalMac network from 1st July.