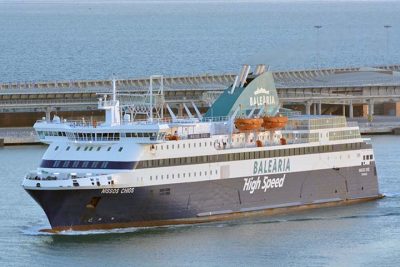 On 20th June, Baleària began operating its fourth international line linking the city of Nador (in Morocco) with the Port of Almeria. The service will depart from both ports twice daily (except Tuesdays and Thursdays, when there will only be one departure from each). The vessel allocated to the route is the 13,955gt/2007 built Nissos Chios (above), 1,200 passenger/350 vehicle capacity, which will cover the route in four hours. The vessel features a wide range of facilities such as a self-service and a-la-carte restaurant with halal-certified food, a bar, a store, a prayer area, specific family-oriented services and an area for pets. The vessel transferred from the Melilla/Almeria/Malaga services with the 3,454gt/1992 built Pinar del Rí­o operating in her place. 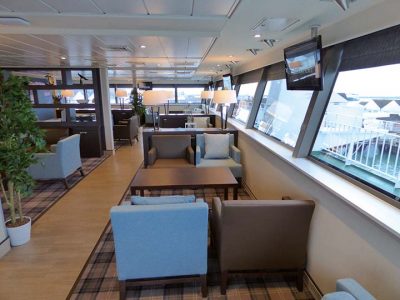 Red Funnel Ferries has refitted and upgraded the two year old South Lounge on A Deck of the 4,128gt/1994 built Red Falcon and Red Osprey to create the club class style Signature Lounge (above). The new facility opened on 10th May and was unveiled to local media on 23rd May. The new premium facility on the Southampton- East Cowes service is a cross-Solent first, giving travellers the opportunity to enjoy an exclusive travel experience. The Signature Lounge is available daily on the Red Falcon and Red Osprey sailings and can be purchased in advance or on-board from £10 per person per crossing. Accessed by boarding card, the new lounge is fully airconditioned and offers panoramic views of the Solent for up to 42 guests, although capacity will usually be capped at 30. 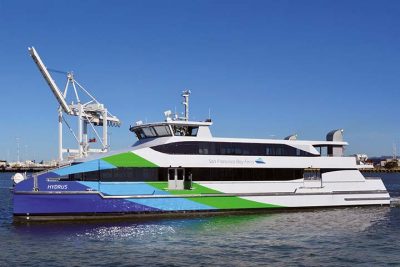 On 19th May the Hydrus, the first in a series of 400 passenger catamaran ferries for WETA, the Water and Emergency Transportation Authority in San Francisco, was delivered and entered service. Built by Vigor in Seattle, Washington, the Hydrus is the first of four sister vessels. The 41m craft is powered by a pair of MTU 12V4000M64 EPA III main engines, each producing 1453kW. One of the earliest passenger vessels to enter service with advanced exhaust after treatment, the system ensures that the Hydrus complies with the latest US emissions regulations and is one of the lowest emission ferries currently operating in North America. Incat Crowther worked with suppliers to create an efficient layout for the system that minimises noise ingress to the cabins and has minimal effect of passenger flow and operations. The ferry has a top speed of 29 knots and a service speed of 27 knots under full load at reduced MCR. The vessel also demonstrates low wake wash characteristics. The Hydrus will be joined mid-2017 by a second vessel, the Cetus, with a further two vessels due in 2018. Four days later Incat Crowther revealed the christening of the first ferry in NYC Ferry’s fleet, as a subsequent pair of vessels arrive in New York. The first vessel was named Lunch Box, following a naming competition held amongst New York school students. The Lunch Box is the first vessel in a fleet of 26m catamaran ferries commissioned by Hornblower Cruises to form NYC Ferries, a government initiative to bring an affordable, city-wide ferry network to New York. Over the coming year, the fleet will grow to some 20 vessels and the network will grow to 6 routes.