Technical Gremlins For The Ben

IoMSPCo.’s 12,747gt/1998 built Ben-my- Chree suffered a cylinder head sheared stud on the morning of 9th April which required a replacement to be fitted before returning from Heysham that afternoon. The situation snowballed during the repair process so the 5,743gt/1998 built Manannan was brought in to take the Ben-my-Chree’s scheduled sailing at that evening with a revised departure time from Douglas at 2245. The overnight departure at 0215 on the Monday was also be operated by the Manannan. The Ben’s 08:45 departure to Heysham and the return sailing from there at 1415 on the 10th was cancelled with the ship resuming service with the 1945 to Heysham that evening, that departed just under 30 minutes late. The Manannan was held on standby when not operating her own sailings and the 7,606gt/1998 built relief vessel Arrow also left lay-up at Larne to operate a round trip Douglas-Heysham-Douglas that day. The entire problem was caused by a failed cylinder head-securing stud on one of the two main engines. The stud, nearly 1 metre in length, is one of six per cylinder and had fractured leaving a section deep in the engine block which had to be removed prior to a new replacement stud being fitted. The technique to carry out the removal is difficult and time-consuming so a specialist contractor, using specialised equipment, assisted Steam Packet Company engineers. The work also required the fitting of a new piston and cylinder liner, which was carried in the Steam Packet Company’s Island-based stock to minimise repair time. Once the stud removal was completed, the replacement cylinder head was fitted, the engine filled with coolant and an engine trial undertaken alongside in Douglas. The Ben-my-Chree’s 2017 round-the-Island cruise will take place on 24th June.

The Italian operator received the Shipping Company of the Year award in Naples on 5th April in the majestic surroundings of the Ritz- Carlton Hotel in New Orleans. The ceremony was held during the third edition of the North America Automotive Global Awards, an event organized by Three6Zero, an editorial group specialising in the automotive industry with various publications distributed in America, Asia, India and Europe. On 18th April the Grimaldi Group announced an important enhancement of its overseas maritime services: a new direct service to Mexico, dedicated to the transport of cars, rolling freight and project cargo, has been recently launched. The link is an upgrade of a regular service between the Mediterranean and North America, already performed by the Group with great success since 2015. The new extended service connects the Italian ports of Civitavecchia and Savona and the Turkish port of Gemlik with the North American ports of Halifax (Canada), New York, Baltimore, Jacksonville and Houston, as well as Veracruz in Mexico. The service has a weekly frequency for destinations in North America and a fortnight frequency for Mexico. The service performed by the Grimaldi Group is the first direct and regular link between the Mediterranean and North America for rolling freight. Thanks to the deployment of Ro/Ro Multipurpose vessels with a loading capacity of 3,000 lanemetres of rolling freight and 3,000 cars, the regular service ensures a transit time of only 12 days between Italy and North America and 20 days for Mexico. 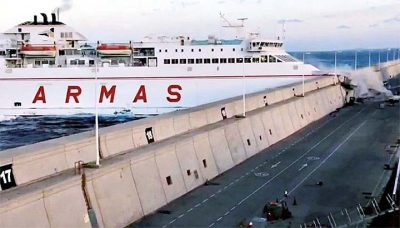 On 21st April 13 passengers were injured when the 17,343gt/2004 built ARMAS ferry Volcan de Tamasite (above) ploughed headon into the breakwater at Puerta de la Luz, Gran Canaria. The ship suffered a loss of electrical power according to reports. The impact sent chunks of the concrete wall tumbling down onto a service road and quayside. A 3km oil spill was caused when the impact and resulting debris ruptured fuel lines running along the breakwater. The ship appeared to hit the breakwater having already departed the port, bound for Santa Cruz. A full investigation followed. The Volcan de Tamasite returned to port safely, disembarked passengers and vehicles and went to the Astican Shipyard, situated in Las Palmas for bow repairs. This was expected to take two weeks with no other damage reported to the rest of the ship’s structure. Four days later the 2,123gt/1981 built Giraglia, managed by Moby Lines, crashed into the wharf at Bonifacio upon entering the commercial port. The vessel was arriving from Santa Teresa di Gallura in Sardinia, but suffered engine failure and was unable to stop. The ship collided with the pier and suffered hull breaches and damage, but fortunately there were no injuries among the passengers. The errant ship was prohibited from sailing until further repairs, a special survey and a port inspection had taken place.

Following on from the highly successful contract to build Red Funnel IoW Ferries’ latest fast ferry, the 363gt Red Jet 6, which was delivered in July 2016, Wight Shipyard secured a £6.3m contract in October 2016 for two more fast ferries. The contract was awarded by MBNA Thames Clippers which provides fast leisure and commuter services on the River Thames.

The Cowes Floating Bridge service resumed service on the afternoon of 13th May using the brand new Floating Bridge No.6. There had been no vehicle service since 3rd January, only a passenger launch. Unfortunately the angle between the brand new slipways and the prow ramps caused several cars to ground at the front end. Following this, the vessel broke down completely the next day just off the East Cowes slipway meaning that passengers had to wade or be carried through a small area of water back to dry land. The MCA then insisted that the vessel be withdrawn until the issues were addressed. Meanwhile, on the River Thames a ferry veteran bowed out on 29th April when the Tilbury-Gravesend vessel Duchess M (built as a Gosport Ferry) was retired.

This months news for IomSPCo, Grimaldi and others