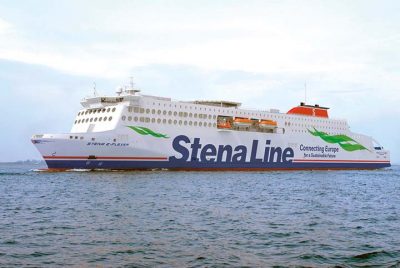 In 2016 Stena Line announced a newbuild contract of four Ro-Pax ferry vessels with a planned delivery schedule during 2019 and 2020. The contract also contained an option for another four vessels to be ordered. The newbuild quartet are being built at the AVIC Shipyard in China and, as announced on 15th February, the plan is to locate the vessels on the Irish Sea, specifically on Stena Line’s routes to and from its expanding Belfast hub. 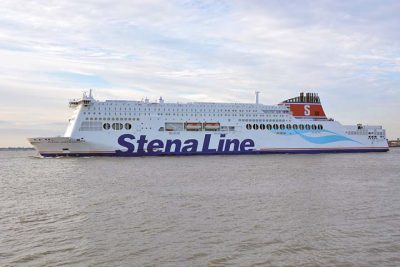 Stena Line’s 64,039gt/2010 built Stena Hollandica (above) proceeded to dry dock at Rotterdam on 25th February and was replaced by the 33,690gt/2011 built Killingholme-Hoek van Holland ship Stena Transporter until the Harwich ship resumed service on 9th March. The ‘Transporter’ was replaced at Killingholme by the 13,017gt/1996 built Stena Scotia. The latter was herself replaced by the ubiquitous 7,606gt/1998 built Arrow on a sub-charter from the IoMSPCo, following winter lay up in Larne, on the Killingholme-Europoort service. The 20,028gt/1982 built former Stena Line train ferry Trelleborg (now the Sunny) was scheduled to leave Greece in early March to start a new life in the Arabian Gulf.

The Helsinki-Tallinn route is becoming increasingly popular and attracts leisure and business travellers as well as foreign tourists. Viking Line is responding to this strong demand by adding a new service option in the form of the 5,902gt/1998 built Viking Faster, or FSTR, which will serve the route during the period 10th April-22nd October. The ‘new’ vessel is a 91m catamaran that will cross the sea between Helsinki and Tallinn in 1hr 45mins and may be more familiar to readers as P&O Ferries’ Portsmouth Express/Cherbourg Express/ Express. She served Portsmouth- Cherbourg 2000-2004 having been built as the Catalonia for Buquebus. The vessel then moved to Cairnryan-Larne 2005-2015 and was sold to Gotlandsbåten for further service in 2016. The latter venture was unsuccessful so Viking Line has now taken the craft on.