Armed French police have begun patrols on cross-Channel ferries in a bid to prevent terrorist attacks.

The scheme commenced on 1st August but, without any agreement in place for French police to patrol vessels in UK waters, the Sea Marshalls arrived by helicopter and boarded the Mont St. Michel at around 17.30 local time as she approached the French coast. According to the Marine Police in France, the UK and French governments are in talks about French officers patrolling for complete crossings whilst the Home Office said security plans were under constant review. The Marine Police unit in France has deployed a permanent unit to carry out high-visibility random but regular patrols on passenger ferries. The French police can patrol in French and international waters only until any agreement is reached with the UK. It is not clear whether the plan includes non-French vessels, such as UK-flagged ferries arriving in France. In July there were very lengthy delays for UK passengers heading to the port of Dover due to increased security checks at French border posts, instigated by the French authorities without sufficient manpower to cope with the volumes of traffic. 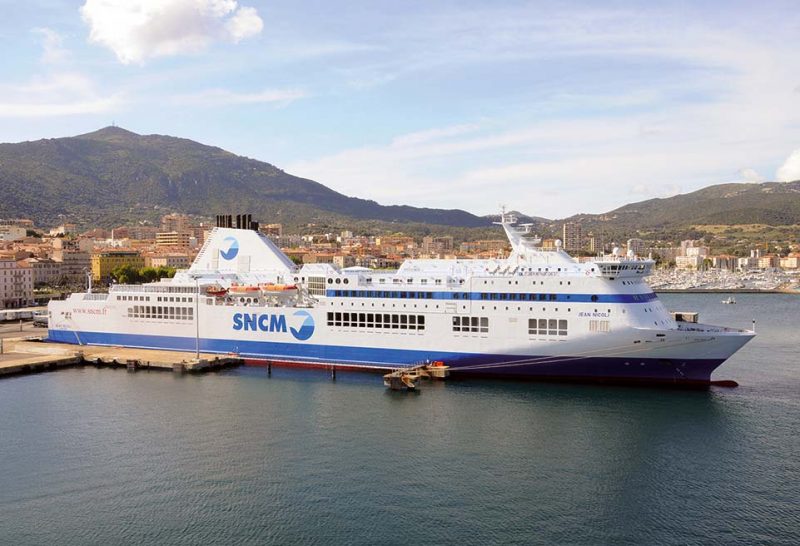 Amid the heightened security and awareness in France following terrorist attacks, 77 passengers and crew were evacuated from Corsica Linea’s 29,968gt/1998 built Jean Nicoli (above) at Joliette, Marseille, on the morning of 31st July. An explosion had been heard as the ship was loading but, after the Bomb Squad and Dogs Unit had arrived, it was discovered that some World War Two ammunition had detonated in the seabed. France had already drafted in heavily armed soldiers and police to its ports in fear of suicide attackers boarding ferries. Thankfully this occasion was a harmless false alarm.