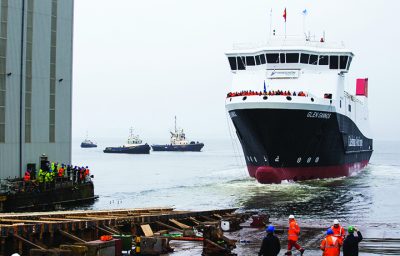 The Ardrossan-Brodick (Isle of Arran) newbuild Glen Sannox has, in a sadly predictable manner, been delayed from a May 2018 delivery to 2019. The ship’s keel was laid at the Ferguson Marine Shipyard on the Clyde on 17th February 2017 however the ship’s hybrid technology and a yard with little recent experience of building larger ferries could add further delays. The deferral of the delivery of the Glen Sannox (Yard No.801) will have a knock on effect on the delivery date of Yard No. 802, destined for the Uig Triangle service and originally scheduled for late 2018. The 102m long and LNG powered vessels represent a £97m contract and building got underway at a time when the shipyard was also investing in a modernisation programme. The yard says that the scale of the necessary upgrade has made day-to-day operations at the yard more complicated, impacting on achieving key milestones for the vessels. The Glen Sannox was launched at 1345 on 21st November with First Minister Nicola Sturgeon participating in the ceremony at Port Glasgow (above). The 1,273dwt and 14.5 knot ship is 102.4m long with a beam of 17m and a draught of 3.4m. Power will be provided by two Wärtsilä 34DF diesel engines plus the vessel is fitted with Twist Flow Costa Bulb Flap rudders, three 620kW bow thrusters and a 480kW stern thruster, making her highly manoeuvrable. An innovative stern ramp will slide transversely, allowing the ships to operate on several routes across the Clyde and Hebrides Ferry Service network. The ship’s LNG tank is over 20m in length, 4.5m in diameter and weighs over 80 tonnes, making it the largest and heaviest single component on the new vessel. The tank has an internal volume of 149m3 and can hold approximately 70 tonnes of LNG. Capacity will be provided for 1000 passengers, 127 cars or 16 HGVs.

On 7th November Damen Shipyards Group and Belgian ferry operator Aqualiner signed a contract for the delivery of three additional Damen Waterbus 2407 vessels, for operations on the Scheldt in Antwerp. The Waterbus 2407 is a new composite design from Damen, first unveiled just over a year ago. Lightweight, low maintenance and fuel efficient, it can carry up to 100 passengers at speeds up to 21 knots. Aqualiner, founded in 1999, is contracted by the Port of Antwerp to provide water-based public transport services in Antwerp and has operated the first such vessel, Aqua Diamond, since June 2017. The vessel’s success has led to Aqualiner formally confirming the order for three more, enabling Aqualiner to expand services to the north. The Aqua Diamond was built at Damen Shipyards Antalya, as will the three new additions. The Antalya yard specialises in composite vessels and builds a wide range of fast boats using the latest vacuum infusion techniques. All three ferries are scheduled for delivery next year, with the possibility of further orders coming thereafter.

The company, a subsidiary of American maritime group TOTE Inc., has recently contracted MAN PrimeServ (MAN Diesel & Turbo’s after-sales division) to convert the 65,314gt/2003 built North Star and Midnight Sun to dual fuel operation on LNG. The roll on/roll off ships are currently both powered by four MAN 58/64 engines and will be retrofitted to MAN 58/64 units. The contract, originally signed in April 2017, covers the design, development and testing of a first-of-its-kind dual-fuel outfit, which will serve as foundation for the largest LNG conversion in North America. The new components that the ships receive during conversion will significantly extend their working lives and will prepare the ships for the IMO sulphur emissions cap in 2020.

On 20th November P&O Ferries reported carrying 14,804 lift units on its new dedicated container freight service between Zeebrugge and Hull since the launch in May 2017. October has been the most popular month to date with 2,771 units handled. P&O Ferries has chartered the 118m Elisabeth to serve the route. The 5,067gt/ 2000 built container ship makes three round-trips per week between Zeebrugge and Hull, complementing P&O Ferries’ existing combined tourist and freight service between the Belgian port and the Humber. The ship carries all types of lift units on the new service including containers and swap bodies, with popular cargoes including household goods, wine, chemicals and food products.

The Staten Island Ferry is one of the most famous ferry services in the world. Two of the ferries are to be replaced with three new ferries over the next few years being built by Eastern Shipbuilding. For their propulsion system the latest generation of Voith Schneider Propellers was selected. Their high reliability and excellent manoeuvring characteristics were decisive for the award of this contract. The Voith Schneider propulsion unit has been in use with passenger/vehicle ferries’ since Southern Railway’s new ferry Lymington was fitted with them in 1938 for the Lymington-Yarmouth (Isle of Wight) service. Each new Staten Island Ferry will be fitted with two VSP36RV6 ECS/285-2 Voith Schneider Propellers (VSP), the latest evolution of this propulsion concept. The VSP not only offers efficient propulsion, but also efficient control. Their excellent manoeuvrability is a primary reason why the NYC DoT decided to use this type, because in the very busy New York Harbour, the ferries must be able to react promptly to traffic situations. Besides this, the ferry service has to deal with difficult conditions like strong currents, waves as well as ice conditions in winter, which is why Voith Schneider Propulsion was selected as the best available technology. Founded in 1867, Voith today has around 19,000 employees and earns 4.3 billion euros in sales. It has locations in more than 60 countries and is one of the largest family-owned companies in Europe. In addition, Voith will supply four fill-controlled VTC 1150 TPZSRL turbo couplings that allows the engine to be started and warmed without engaging the propulsion system when the coupling is empty. When filled, the fluid couplings eliminate torsional vibrations and provide the option of single engine operation mode when only one coupling is engaged. A single shaft then transmits the power to the VSP plus Voith Turbo will supply each ferry with an Electronic Control System. The ferries are equipped with two separate control stands, one at each end of the ferry. This provides captains with an excellent view of the surroundings and river traffic at all times. Each ferry is equipped with a total of four diesel engines that are arranged mid-ship. Two engines with a power of 1,863kW at 750rpm are assigned to each VSP. The engine redundancy ensures minimal ferry disruption if a failure occurs and, given the high frequency of the ferry service schedule, failure of one of the vessels would significantly impact the city’s commuter traffic. Approximately 22 million passengers a year use the ferries that connect Staten Island and Manhattan more than 100 times a day.

The lengthening programme of Finnlines’ vessels is in full swing at the Remontowa S.A. shipyard in Gdansk, Poland. Finnlines has finished the first Breeze Class Ro-Ro ship lengthening project. The first ship to be so treated, the 28,002gt Finntide, was delivered in 2012 from the Chinese Jinling shipyard and arrived in Gdansk on 25th September 2017. As planned, the vessel was cut in two and a 30-metre section was inserted between the sections. The hull sections were then welded together again, thus adding an additional 1,000 lane metres of capacity representing a 30% increase. After the modification, the Finntide is 217.77m long and has a capacity of 4,213 lane metres. 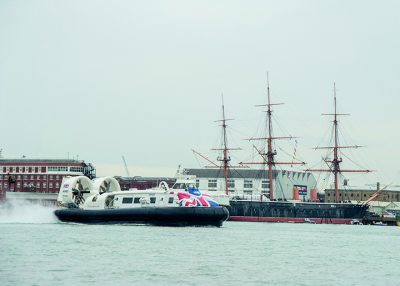 Hovertravel’s 2016 built 12000TD hovercraft Island Flyer visited Portsmouth Harbour for the first time on the morning of 24th November (above). Sister craft Solent Flyer and Island Flyer are normally to be found crossing the Solent between Southsea and Ryde, but the Island Flyer flew into the harbour for an inaugural visit and trial to see how the craft would perform at the slower speeds required for such an environment as a port. After performing several manoeuvres and pausing at Portsmouth International Port the Island Flyer returned to Ryde via Southsea. Hovertravel is aspiring to expand its service portfolio so a Portsmouth Harbour-Ryde or Portsmouth-Southampton service cannot be ruled out.