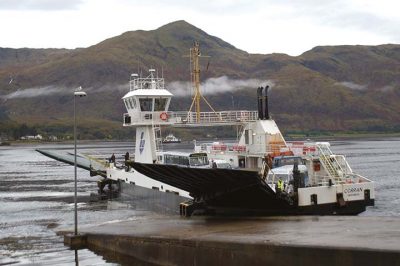 On 19th July came reports that divers were checking Lochaber’s Corran Ferry vessel, the 351gt/2001 built Corran (above), for hull and propeller damage after she broke down and made contact with rocks. The incident forced the Highland Council to suspend the service. The Corran Ferry allows access to and from the communities of Ardgour, Morvern and Ardnamurchan via a narrow stretch of Loch Linnhe. It is also used by people and businesses on Mull, who first travel to the mainland on the Fishnish-Lochaline ferry. The Corran Ferry and Fishnish-Lochaline services also offer tourists an alternative to the Oban to Mull ferry. Typically, the 166gt/1975 built back-up ferry Maid of Glencoul was moored at Rothesay awaiting a part, meaning that ferry users had a lengthy road diversion. The service resumed on 20th July after five days of disruption once the Corran had been repaired.

Clydelink’s Kilcreggan-Gourock ferry service was hit by more disruption on 17th July due to a technical fault. Instead, a free replacement bus service operated the 50 mile road link between Kilcreggan and Gourock in place of the 13-minute ferry trip. Back in June the Island Princess, previously operated by Puffin Cruises at Lymington, was off service for a week after inspectors identified 30 separate faults with the vessel. The vessel returned to service on 27th July after a new engine was fitted. The service suspension was prolonged when the Island Princess failed two subsequent MCA inspections due to heat exchanger/water pump faults. 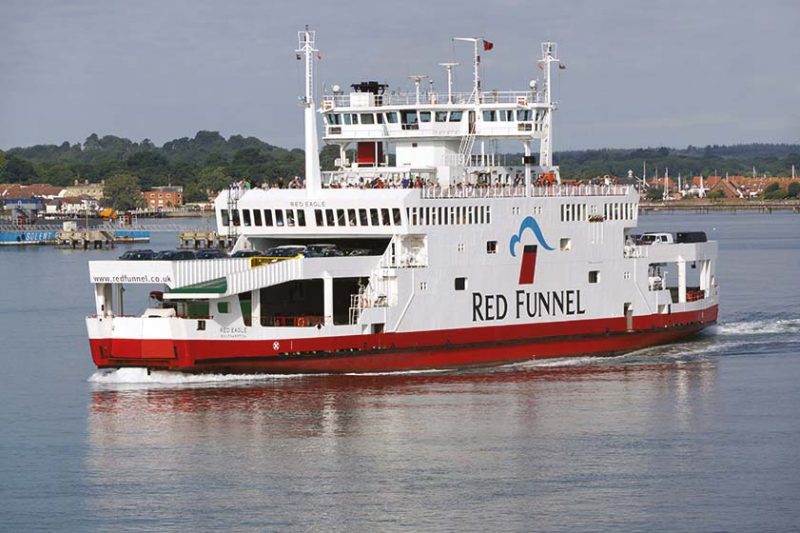 It was also Red Funnel’s turn for gremlins on 17th July when the 4,075gt/1996 built Red Eagle (above), suffered a CO2 fire suppressant system fault. The vessel resumed service on 21st July after considerable delays and disruption had been experienced on this busy cross-Solent service. On 25th July the MCA announced an investigation into the unintentional release of the CO2 gas into the CO2 room aboard the ferry. That same day more woes struck the Red Funnel East Cowes-Southampton service when the linkspan at the Southampton Royal Pier terminal suffered a hydraulic failure. The issue was discovered when the 0715 ferry from East Cowes arrived at the mainland port. The issue prevented cars from unloading from the upper vehicle deck so they had to remain aboard, be taken back to East Cowes, unloaded and reloaded on to the main vehicle deck. Then services switched to a relief single deck Ro-Ro berth in Southampton’s Empress Dock (Berth 25). Services from Southampton were delayed by up to 2 hours and by up to 4 hours from the Island. Non-essential travel was discouraged as the ferries struggled with a much reduced car capacity. The fault was rectified later that day. It was generally a bad day for cross-Solent ferry services on 18th July as the St. Clare was off service (Portsmouth-Fishbourne), the Wight Ryder I had broken down (Portsmouth-Ryde with relief vessel Ali Cat covering) and Hovertravel’s Freedom 90 was the only one of three craft available for part of the day. 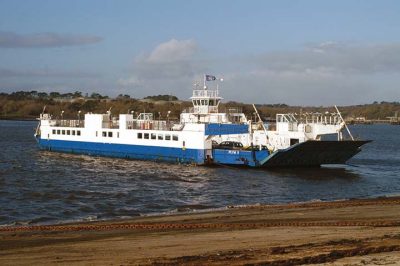 The Torpoint Ferry across the River Tamar between Plymouth and Torpoint suffered issues on 15th July when a water pipe failed aboard the chain ferry Plym II (above) and water leaked into electrical systems. A temporary repair then failed, leading to a prolonged period of just two of the three ferries being in service.

The new Cowes Floating Bridge (Floating Bridge No.6) is also still experiencing issues including yachts snagging her chains and the noise levels of the vessel requiring a service suspension after 2230 daily until the matter is rectified.

On a more positive note, the new double deck linkspans at Wightlink’s Fishbourne and Portsmouth terminals became fully operational on 27th July. These are part of the L45 million investment in the Portsmouth-Fishbourne route and only the modified St. Clare will be able to benefit from the new facilities until the new ferry arrives in 2018. From now on, cars and small vans will use the upper ramp and lorries, coaches and other larger vehicles will use the lower ramp. 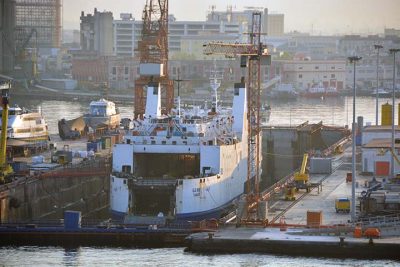 The former Galloway Princess/Stena Galloway has received a €6 million overhaul at Naples (above) having been purchased by Detroit World Logistics Maritime. The 12,175gt/1980 built ship is expected to return to service in September across the Straits of Gibraltar between Tangier Med and Algeciras. She retains the name given to her when operated by IMTC, Le Rif. IMTC ceased trading in 2013 with most of the discarded vessels going to scrap. The vessel now sports an almost Sealink-esque livery of blue hull, white superstructure and red funnels. Her built in bridge wings do look a little odd however.

Meanwhile the former nightclub ship Tuxedo Royale, which was moved from Gateshead to Middlesborough in 1999 after an 11 year career as a nightclub, appeared to be in the early stages of demolition in early August. The ship had been pretty much abandoned since 2006 when her owners went into liquidation having used her as a floating casino, and she began to sink on the River Tees in 2011. Since then she has sat on the river bed and also suffered a suspected arson attack in June 2017. The ship was built as the Dover in 1965 and the 1961 built Caledonian Princess (Tuxedo Princess, which replaced the Tuxedo Royale) was scrapped in Turkey after withdrawal as a nightclub in 2008. The Tuxedo Royale had been placed on the National Historic Ships register but alas the campaign to save her always had a massive mountain to climb.

Clydelink, Red Funnel and Torpoint are some of those featured in this month's ferry news