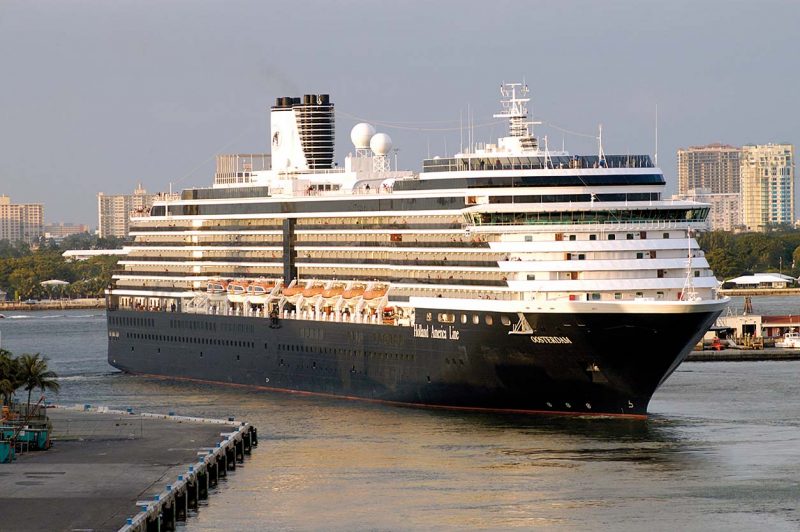 Holland America Line’s Oosterdam (above) and Prinsendam have undergone refits to their navigation bridges. The bridge refit on board the 82,820gt/2003 built Oosterdam was concluded in Palermo, Sicily in early May. Then just days later the contractors, Radio Holland, continued with a bridge upgrade project for the 39,051gt/1988 built Prinsendam, which took place in Freeport, Grand Bahama. The latest projects follow refit work on the Noordam and Westerdam in 2014 and 2015. Both bridge retrofits for the Oosterdam and Prinsendam were highly customised assignments which each required their own specific approach. The expertise and project management skills of Radio Holland ensured completion within a limited time frame during each ship’s two week dry docking. Radio Holland and Holland America Line’s relationship goes back many years, and Radio Holland technicians are therefore familiar with the Holland America Line vessels due to conducting maintenance on the Nav/Com equipment. The bridge retrofit work on the Oosterdam included, removal of the existing integrated bridge, all antennas and ECDIS computers, as well as design and installation of new console tops including wing consoles to accommodate new Furuno radars, ECDIS (Main and Backup), EMRI designed Furuno Autopilot with two controlling heads with track control, EMRI AZIPOD propulsion interface, Satellite Speed Log, two AIS and two GPS systems. The scope of work for the Prinsendam was more extensive. The bridge layout was modified so that it is in line with that of the Vista Class ships, which included moving equipment and installing an echo sounder and speed log. Additionally, Radio Holland carried out an extensive cable ‘clean up’ and modernisation, removing some 250 redundant cables. This makes servicing much easier. The bridge layout was also changed to accommodate a pilot station so the pilot can have their own radar on board plus an ‘Officer on Duty’ position, whereby the officer can oversee the entire bridge. The next ship to be handled will be the Westerdam as part of Radio Holland’s 16-ship maintenance agreement that was awarded in 2015.

Royal Caribbean International has confirmed its intention to invest in the construction of a new cruise terminal and the waterfront at La Spezia, Italy. MSC Cruises has also pledged its involvement in the port. Two main construction projects in the Marseille harbour area of French port Marseille Fos were also nearing completion in July, following the final stage of works costing almost €64 million that will cater for the largest cruise ships. The Passe Nord port entrance has been enlarged to 240m and dry dock No. 10 recommissioned. The port authority approved the scheme in June 2012 and is contributing almost half the €32.7 million cost alongside state and regional funding. Drydock 10, the third largest in the world after Lisbon and Dubai at 465m x 85m, was primarily rejuventated as a result of the growing world fleet of mega-cruiseships, 65% of which operate in the Mediterranean. The facility will also provide a minimal-deviation repair and maintenance option for giant container, gas and bulk carriers as well as offshore platforms In 2015 the port handled more than 170 vessels over 300m in length and is now braced for regular calls from cruise ships exceeding 360m such as the Harmony of the Seas. Costa Cruises, part of Carnival Corporation, has since decided to buy a 33% share in Chantier Naval de Marseille shipyard, as the company signed an agreement for the development of a ship repair and conversion centre with Genoese San Giorgio del Porto company. The agreement between the duo calls for an initial investment of €10 million aimed at increasing the efficiency of the Giorgio del Porto’s shipyard, which operates three dry docks. Carnival said that an expansion is planned due to the delivery of seven new ships, three for German AIDA Cruises brand, two for Costa Crociere and two for Costa Asia. RCI has reported an adjusted net income of $235.2 million, a notable gain on the $185 million reported in 2015. The result is better than predicted due to lower fuel expenses. The sale of 51% of the Pullmantur Group resulted in increased yields and costs metrics for 2016, as they’re lower than the fleet average. For the six months ending 30th June operating increased from $13.1 million to $2.56 billion while the company brought in a total revenue of $4 billion, an increase of $149 million on the prior corresponding period.