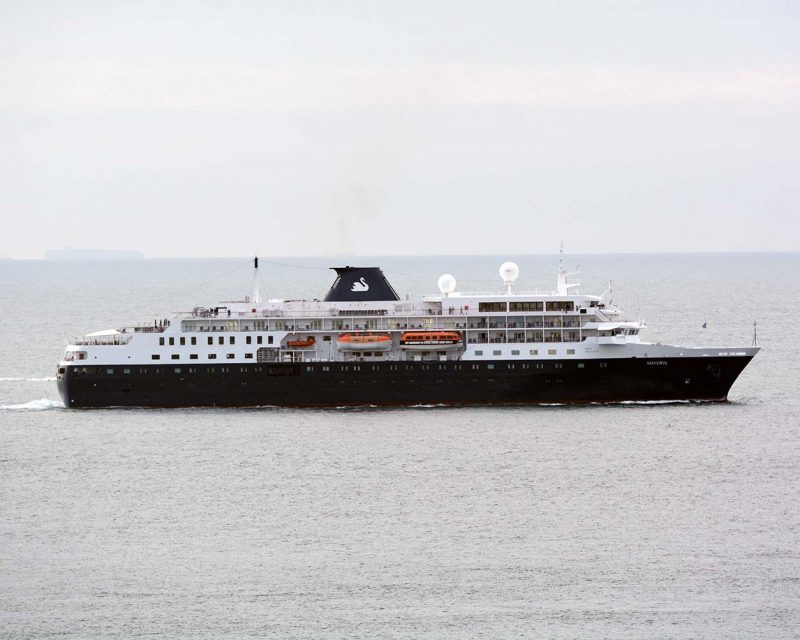 With 2017 barely underway, Eddie Williams, David Dunckley and Matthew Richards of Grant Thornton UK LLP were appointed joint administrators of All Leisure Holidays Limited (ALH) on 4th January 2017. ALH provided cruise holidays on two cruise ships, the 12,892gt/1996 built Minerva (above-top) and the 15,396gt/1990 built Voyager (below) under the respective brand names Swan Hellenic and Voyages of Discovery. Due to the adverse financial position of ALH, the business ceased to trade resulting in the majority of employees being made redundant and the cancellation of all future voyages. 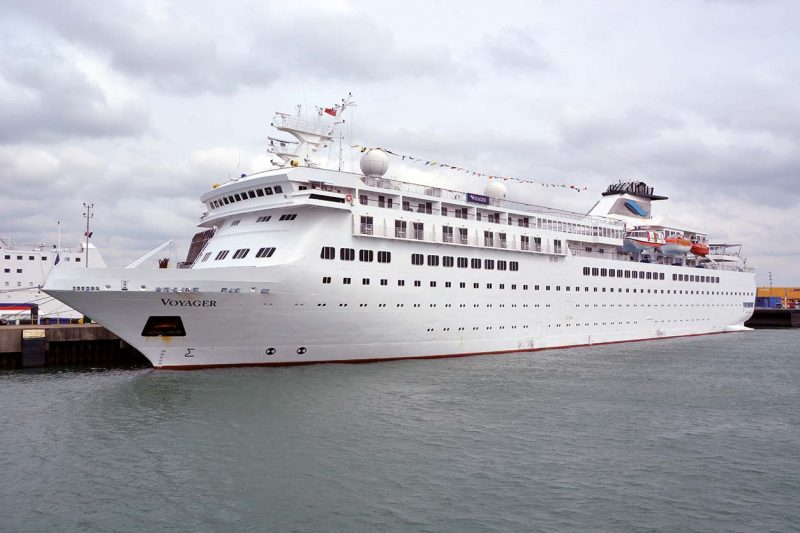 On 30th December passengers booked aboard the Voyager’s Riches of the Orient cruise were due to commence a New Year cruise from Malaysia to Borneo, Cambodia, Thailand and Singapore. Sister company Swan Hellenic did the same for the Gateway to the Atlantic Isles cruise due to depart on 3rd January. Passengers were told the cancellations were for “operational reasons” prior to the failure of the parent company being publicised. At the time of the administrators being called in, some 700 expectant cruise passengers were affected. There were around 400 passengers still abroad following what turned out to be the final trips for both ships under the present ownership, with the majority able to use the scheduled airline tickets included as part of their booking to return to the UK. The Civil Aviation Authority also made arrangements to bring the small number of remaining passengers back to the UK at no extra cost.

According to ABTA, ALH had around 13,000 forward bookings. About one-third of those bookings were for UK departures, and are financially protected by ABTA. For cruises beginning abroad, passengers who paid with a credit card could claim a refund from their card provider. According to the most recently published figures, covering the period up to October 2015, the cruise division of ALH lost £146 for each passenger carried. ALH left the stock market in 2016 and turnover in 2015 was £127.3m down from £138.9m in 2014 when a loss of £13.2m was recorded. The fall in the value of the pound following the EU referendum added extra pressure. All Leisure Holidays Limited’s revenue is predominantly in sterling, but its costs are mainly in foreign currencies, particularly the US Dollar and Euro. The ALH chairman, Roger Allard, commented that a perfect storm of geo-political upsets and cost increases had led to the failure.

A Canadian firm, G Adventures, bought two other brands owned by All Leisure Holidays Limited, namely Travelsphere and Just You, just after Christmas. In early December ALH’s Hebridean Island Cruises brand was sold to a company headed by ALH chairman Roger Allard for an undisclosed price. Also involved in the new venture are Hebridean Island Cruises’ managing director Ken Charleson and a group of well-known travel professionals. According to ABTA, the company now trades as Hebridean Island Cruises Limited. The company, which operates the exclusive 2,112gt/1964 built Hebridean Princess, is a stable, profitable and well-established business with a loyal client customer following.

No.4 For Viking Ocean Cruises 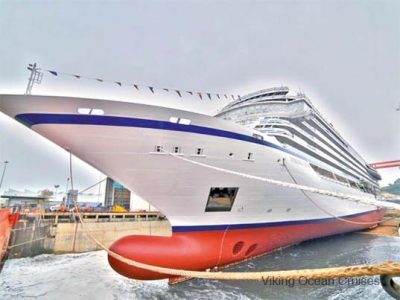 On 15th December 2016 the 47,852gt Viking Sun, the fourth of six cruise ships for Viking Ocean Cruises ordered from Fincantieri, was launched at their shipyard in Ancona (above). The fitting out process then commenced prior to the vessel’s delivery, scheduled for autumn 2017. The launch ceremony was introduced by the traditional and well-wishing coin ceremony, involving the welding of a silver dollar on the highest deck of the ship. Godmother of the ceremony was Yi Lou, Vice President of China Merchant Bank Financial Leasing. The ceremony was attended for the shipowner by Torstein Hagen, founder and Chairman of Viking Ocean Cruises, while Fincantieri was represented among others by Giovanni Stecconi, director of the shipyard. The Viking Sun will offer 465 cabins with accommodation for 930 passengers, with a total capacity of over 1,400 people, including the crew.

The ship has been designed by experienced naval architects and engineers, including an interior design team of London-based SMC Design, and Los Angeles-based Rottet Studios. The first of the series, the Viking Star, was built at Marghera and delivered in spring 2015, the second, the Viking Sea, was delivered in Ancona during March 2016 whilst the Viking Sky will enter service in early 2017. Viking Ocean Cruises’ 47,852gt/2015 built Viking Sea suffered engine problems and interrupted her voyage from Barcelona to Toulon at New Year. One engine failed and the ship was forced to return to Barcelona for repairs that were expected to take a week. The passengers were offered the option of staying aboard until 8th January when the cruise was expected to restart, or taking flights home and receiving compensation for the failed cruise. Guests who remained aboard were given day excursions whilst in Barcelona.

Virgin Cruises and Fincantieri announced on 20th December 2016 that ship construction contracts valued at approximately 2 billion Euros for three new cruise ships had been finalised and are now effective. The three units will be built at the shipyard in Sestri Ponente (Genoa) with delivery scheduled for 2020, 2021 and 2022 respectively. Each ship will have a gross tonnage of 110,000gt, be 278m long and 38m wide. The ships will feature over 1,400 guest cabins that can host more than 2,800 passengers, accompanied by 1,100 crew members on board to deliver the famed Virgin service. The trio of ships will stand out for original design and craftsmanship. They will include some highly innovative ideas and design solutions, notably for energy recovery, reducing the overall environmental impact. For example, each ship will be equipped with an energy production system of approximately 1 MW, which uses the diesel engine’s waste heat. The result is a project that distinguishes Virgin Voyages in the worldwide cruise scene.

Executives from Genting Hong Kong and Meyer Werft shipyard celebrated the keel laying of the World Dream, the second new ship for Asian luxury cruise line Dream Cruises, during a special event held in Papenburg, Germany on 10th January. During the official ceremony block number 3, one of 92 blocks that will eventually complete the 151,000gt ship, was lifted into the building dock to officially start assembly of the World Dream. In keeping with tradition, Thatcher Brown, President of Dream Cruises, laid the customary lucky coins under the keel block of the new vessel as a symbol of good fortune and to bless the ship.

When the World Dream joins her sister ship Genting Dream, Dream Cruises will have the newest fleet, 100% dedicated to the Asia cruise market. Upon completion, the 21-deck ship will be able to accommodate over 3,300 guests in nearly 1,700 staterooms of which 70% have private balconies and over 100 offer connecting cabins. The World Dream will provide guests with an unparalleled choice of on board activities, amenities and stateroom options with the latest features, including the popular “Dream Palace” exclusive ship-within-a-ship concept with European style butler service, Crystal Life Spa and Wellness facilities, over 1,000sqm of luxury shops, six water park slides, and the renowned Zouk night club. The ship will of course offer numerous food and beverage outlets such as gourmet restaurants, bars and cafes specialising in Asian and international cuisines. Building on the success of the Genting Dream, the new ship will boast enhanced Food and Beverage offerings with innovative culinary and lifestyle partnerships. 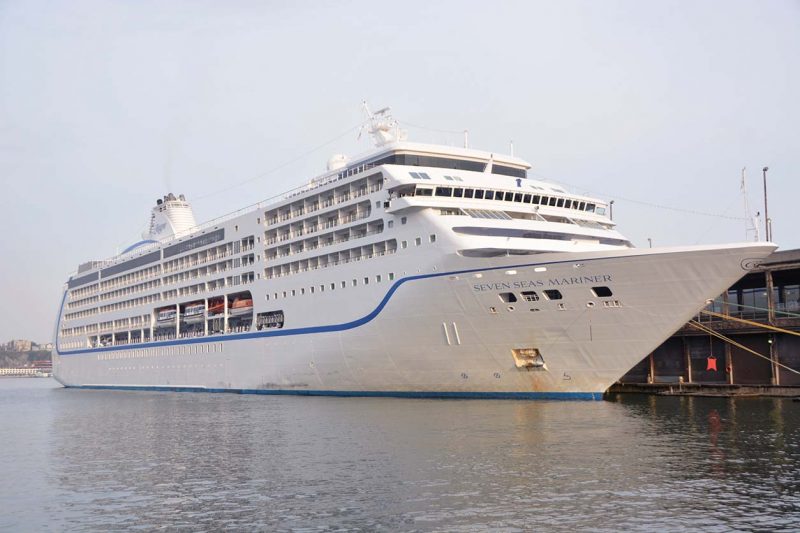 On 7th and 9th December the Cuban government granted approval to two further cruise line operators, Norwegian Cruise Line Holdings (NCLH) and Royal Caribbean Cruises. NCLH is to deploy ships on calls to Cuba from March 2017 as all three of its brands, Norwegian Cruise Line, Oceania Cruises and Regent Seven Seas Cruises, will include Cuba in their offerings.

The company’s first cruise to Havana will depart from Miami on 7th March, a trip operated by Oceania Cruises’ 66,084gt/2011 built Marina. The Seven Seas Mariner (above) of Regent Seven Seas Cruises will call at Havana during two cruises in April 2017 whilst the Norwegian Sky will also offer a selection of four-day voyages that will overnight in Havana in May 2017. The second company which received the approval to send its cruise ships to Cuba, Royal Caribbean Cruises, said that the 48,563gt/1990 built Empress of the Seas will make the cruise line’s first visit to Cuba on 19th April from Miami. The newly refurbished ship will reposition to Tampa, offering two itineraries with calls to Havana on 30th April and 20th May. The ship will homeport in Tampa for the summer, offering a series of four and five night sailings, including port calls to destinations in Cuba. Azamara Club Cruises will call at Havana on a 12-night voyage, Hemingway Hideaways, sailing from Miami on 21st March. The smaller Pearl Mist began offering 10-night cruises to Cuba departing from Fort Lauderdale on 17th January, 11 trips in total. Carnival Corporation’s Holland America Line, Princess Cruises and Carnival Cruise Line still await the go-ahead for itineraries thatt incorporate Cuba.